We’ll Drink to That

Set in a city made hospitable only through irrigation, UCLA has played an ongoing role in providing the Earth’s burgeoning population with clean water. In 1959, graduate students Sidney Loeb M.S. ’59, Ph.D. ’64 and Srinivasa Sourirajan perfected the process that converts salt water to potable water, known as Reverse Osmosis Desalination (RO).

Building on UCLA scientist Gerald Hassler’s earlier experiments, Loeb and Sourirajan invented a device that forced salt water through a finely meshed membrane to filter out sodium chloride. Over the ensuing decades, this enabled drought-afflicted nations in the Middle East, Africa and elsewhere to enjoy safe drinking water harvested from the sea.

In 1965, before RO went global, Loeb tested the technology closer to home by implementing the world’s first brackish groundwater desalination plant in Coalinga. The San Joaquin Valley town, disconnected at the time from the California Aqueduct, had previously depended on trains to bring in clean water. Loeb’s methods gave citizens access to 10,000 gallons of clear drinking water every day.

More recently, Water Technology Research Center director Yoram Cohen, who is a Distinguished Professor of Chemical and Biomolecular Engineering and also on the faculty in the UCLA Institute of the Environment and Sustainability, has been leading the charge at UCLA. Navigating between some half a dozen projects-in-progress, Cohen and his colleagues will soon launch three water treatment systems to benefit previously underserved farming communities in the Salinas Valley.

Cohen says, “We’re essentially creating a virtual water district where everybody’s connected via the Internet, with systems being monitored here at UCLA. And if we can solve these problems in California, the technology we develop here can be applied anywhere in the world.”

Meanwhile, the UCLA lab run by Jennifer Jay, Samueli School of Engineering professor of civil and environmental engineering, has helped to develop new ways to evaluate water quality off the beaches of California. Jay’s team is tackling a major public health issue by measuring the presence of “superbugs” in the ocean. Her students take nasal swabs from surfers on the California coastline to learn when and how antibiotic-resistant organisms colonize humans. Jay’s research group also developed a portable testing station that analyzes water contaminants in 30 minutes, down from the 24-hour turnaround time previously required.

Drawing on 10 years of intensive research, Jay and her students now use a DNA-based technique known as microbial source tracking to help secure the safety of everyday swimmers and surfers. “We’re now able to determine the actual source of contamination on beaches by targeting very specific pieces of DNA that indicate where a fecal indicator bacterium likely came from,” she says.

This tracking system enables scientists to distinguish human waste from that of seagulls, poultry, dogs and others. “Once you know where the contamination is coming from,” Jay says, “it helps you fix the problem.”

Gang Li
The photovoltaics produced in the Yang Yang lab are extremely flexible, lightweight, low-cost, nontoxic and easy to integrate.

The Yang Yang laboratory at the Samueli School of Engineering and Applied Science is making dreams of sustainability a reality through impossibly small energy devices.

If you’ve ever used a cell phone or a TV, the work of UCLA Materials Science and Engineering Professor Yang Yang, a solar cell scientist, has made your digital experiences glow. But his impact is hard to see — Yang’s work takes place at the nano level, far below what’s visible to the naked eye.

Yang and UCLA engineering researcher Jinsong Huang Ph.D. ’07 created an LED device that achieved the highest-ever lumens per watt, using a new combination of plastic-, or polymer-, infused liquid. What does this mean for your phone or TV?

“Visually, it means you get a higher quality display, and the product is lighter and thinner [than its predecessors],” says Huang. “With our improvements, you need less energy, and you get an all-around better product.”

Most of Yang’s recent work focuses on creating sustainable energy through radically thin solar films. Imagine, for example, painting a layer of transparent solar cells onto a window of your home, transforming it into a solar panel. Or painting an existing solar panel so it performs better. This isn’t a sci-fi reverie; it’s a science fact — one that’s getting closer to your shopping cart. 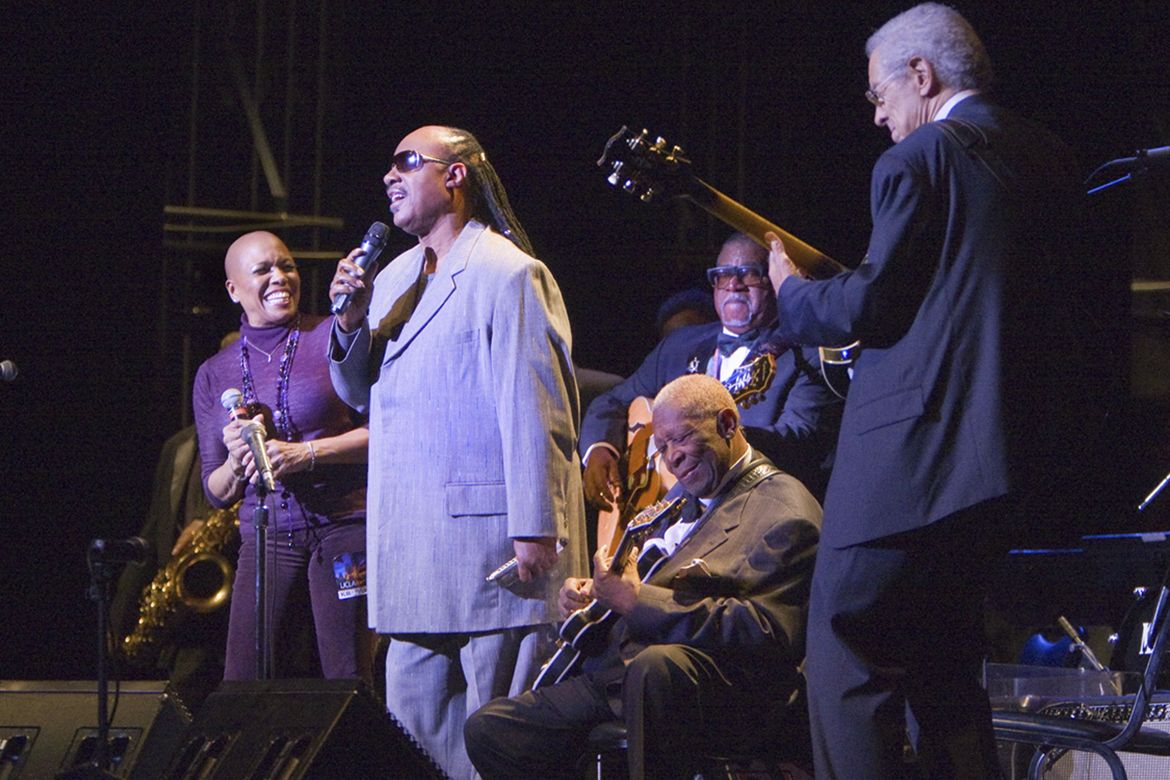 Since the 1930s, performances on campus, mostly in Royce Hall, have made UCLA a cultural center of Los Angeles. In the 1960s, Chancellor Franklin Murphy moved the performing arts program from UCLA Extension into the fold of the larger university, hoping to reach further into the city’s cultural life. The Committee on Fine Arts Productions began offering a rich variety of events under the name Center for the Performing Arts. In 1969, a community outreach program, Design for Sharing, was added.

In 2000, the program was renamed UCLA Live, and today it would be hard to think of a star performer who has not appeared on the Royce stage, from George Gershwin to Stevie Wonder, Joan Baez to Yo-Yo Ma, Carl Sandburg to Langston Hughes, Duke Ellington to Leonard Bernstein.

Under current director Kristy Edmunds, UCLA Live became the Center for the Art of Performance at UCLA (CAP) in 2012, with an emphasis on advancing contemporary performing arts in all disciplines. To provide easier access for patrons living beyond the Westside, CAP soon added the Ace Hotel in downtown Los Angeles as a venue. And in 2018, in partnership with the UCLA School of the Arts and Architecture, CAP acquired the majestic Crest Theater in Westwood Village as a venue for contemporary and experimental theater productions. Renovation plans are under way.

CAP identifies itself as UCLA’s public arts unit for the presentation and scholarship associated with performing art, offering an annual season (between September and May) of live performances and supporting acclaimed artists who create extraordinary work in the dedicated practices of contemporary dance, theater and music, in addition to emerging genres.

Since their birth in the turbulent ’60s, UCLA’s four ethnic studies centers have made waves far beyond the campus. Now, as they celebrate their 50th anniversary in a divided America, their mission — to use advanced research to bring about social justice — takes on added urgency.

Ethnic studies at UCLA began as a grassroots effort with students of color leading the way. In the summer of 1968, Virgil Roberts ’68,M.A. ’69 worked with other students on the Black Student Union’s Education Committee to write a formal proposal for an ethnic studies center. That proposal became the framework for all four research units launched in fall 1969: the African American, Chicana/o, Asian American and American Indian studies centers.

Chicano and Asian-American students were quick to seize the new opportunities.Amy Uyematsu ’69, M.Ed. ’72 and Morgan and Helen Chu were part of the first wave of Asian- American students. The very term “Asian American” was invented at UCLA by Professor Yuji Ichioka ’62, who taught the 1969 class “Orientals in America.” Carlos Manuel Haro and Juan Gomez-Quiñones were among the students demanding more Chicano presence at UCLA and supporting the 1968 Walkouts(strikes at East Los Angeles public schools). Haro, Gomez-Quiñones and Morgan Chu earned B.A., M.A. and Ph.D. degrees at UCLA; Helen Chu earned a B.A. in 1969.

Because Native-American enrollment was so small in 1969, faculty played a greater role in that center’s development. The center painstakingly compiled more than 400 treaties to create a course. The law — U.S. law as it applies to American Indians and the tribal legal systems predating the U.S. — has been a key focus of American-Indian studies ever since. Celebrating their first half-century, the ethnic studies centers are respected publishers of scholarly work. Undergraduates pursue majors and minors. Graduate students earn master’s degrees and, in Chicana/o Studies, pursue the Ph.D.

And the thirst for social justice continues. The UCLA American Indian Studies Center partners with the UCLA School of Law to offer a joint degree. The UCLA Asian American Studies Center works with the community to preserve ethnic neighborhoods. The UCLA Chicano Studies Research Center gauges Latino representation at the Smithsonian Institution. The Ralph J. Bunche Center for African American Studies at UCLA champions projects such as the Hollywood Diversity Report.

At age 50, the centers are shifting into a new stage, one in which they tap their valuable expertise not only to educate and build awareness, but also to improve the overall well-being of a nation struggling with its diversity and its identity. 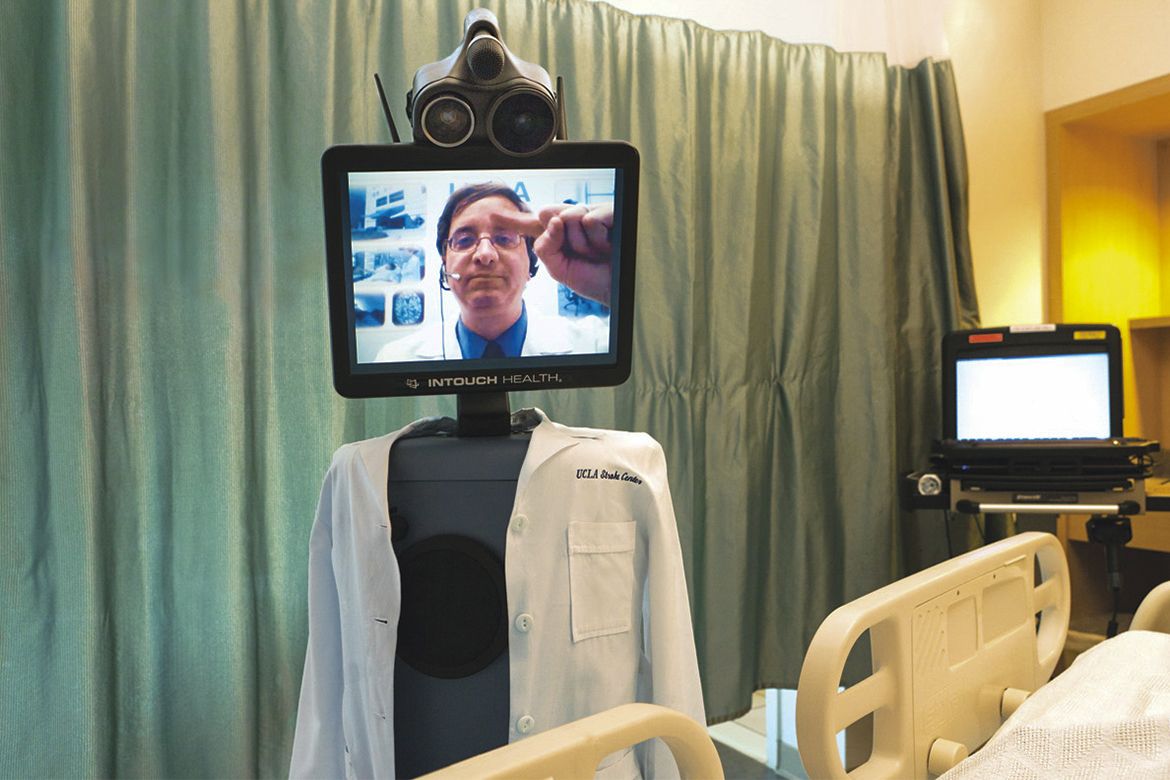 Fourteen years in the making, the nation’s first major new hospital of the 21st century opened its doors to patients in 2008. And fitting for a health system that has provided the latest in medical technology since the middle of the last century, Ronald Reagan UCLA Medical Center ushered in a new era that leverages digital technology to maximize patient care. The 1-million-square-foot facility, flush with natural light thanks to the design by I.M. Pei and his son, C.C. Pei, included such new features as Internet hook-ups in every patient room and operating rooms with high-tech equipment that would draw a crowd at the Consumer Electronics Show.

By 2013, UCLA was implementing a comprehensive health record program, CareConnect, that integrates the functions of some 65 software applications into a single system, accessible across the UCLA Health system and available 24/7 to an estimated 18,000 clinical faculty and staff. By bringing all pertinent information to health-care providers during the patient’s visit and streamlining what patients need before and after their appointments, the new digital system has moved UCLA beyond the digital era to embrace integrated and patient-centered care.