In an unknown radio signal at the heart of the Milky Way, she found a grand one. Since it was first detected in 1931, astronomers have wondered about the source, which was ultimately named Sagittarius A* (said aloud as “A-star”). Was it a cluster of dark stars? Some undiscovered particle? Or a single, gigantic black hole?

For more than 25 years at UCLA, Ghez pursued — and then confirmed — the hypothesis that the object is a supermassive black hole, with a mass 4 million times that of our sun. Her work has revealed new knowledge about our galactic neighborhood, shaken up what has been understood about the evolution of stars and galaxies, and created a test bed for our physical understanding of the universe.

This is not a story of “eureka” moments, although there have been spikes of excitement.

Rather, it’s a tale of being persistent, accruing data, analyzing that data carefully and improving our view out into the endless dark.

“Hard problems require patience,” says Ghez, UCLA’s Lauren B. Leichtman and Arthur E. Levine Professor of Astrophysics and director of the Galactic Center Group. “If it were easy, it would have already been done. Moving the frontier of knowledge forward is just hard work.”

Among her accomplishments, Ghez has been the recipient of a MacArthur Fellowship (often called the “genius grant”), and she was the first woman to receive the prestigious Crafoord Prize in astronomy.

Last October, when Ghez won the Nobel Prize in physics, she was only the fourth woman to take the prize in that category and the first for astrophysics.

Although his theory of general relativity predicted black holes, Albert Einstein thought they didn’t exist in the real world. Indeed, the mind strains to comprehend the concept. Resulting from the death of enormous stars, black holes are infinitesimally small and infinitely dense. Inside them, time folds back on itself. Their gravity is so compelling that not even light can escape. In other words, Ghez was looking for something that, by definition, can’t be seen.

Sagittarius A* is painted instead through the effects of its gravity, in light and heat sent out by surrounding stars 26,000 years ago, during humankind’s Stone Age. Stitching together a quarter-century’s worth of data points, Ghez and her team have brought the stars’ looping dance to life in a stop-motion movie that reveals a bit more about life, the universe and everything.

“Her group’s discoveries are a continuing sequence of steppingstones that go farther and deeper into new science,” says Mark Morris, a UCLA professor of astronomy and astrophysics who, along with professor emeritus Eric Becklin, has been Ghez’s longtime partner in the Galactic Center Group. “Andrea’s strong focus to stay the course for the past 25 years has been necessary for going as far as she has.”

THE SKY IS NOT THE LIMIT

Ghez grew up in Chicago, the eldest of three sisters. Among her earliest memories was Neil Armstrong’s moonwalk, which helped set her sense of scale — and of what was possible — beyond earthly bounds. Her father, an economics professor, stoked her love of math and puzzles with logic games from the time she was a small child. She also watched her mother advance from working as a secretary at an art gallery to becoming its longtime director. 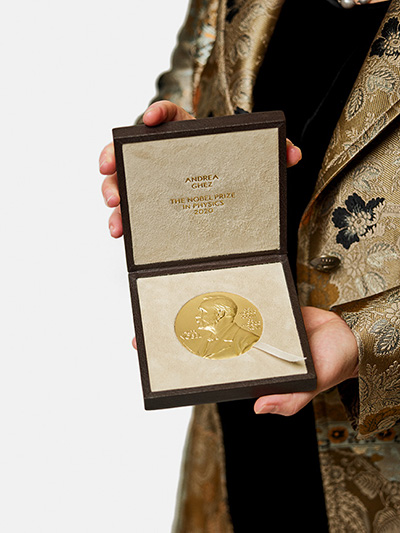 Even before she set her sights on the galactic stage, she showed the will to cheerfully defy expectations in the face of naysayers. Some told her that a girl couldn’t get into the Massachusetts Institute of Technology. But that didn’t stop her from earning her bachelor’s degree in physics there.

The same doubting voices spouted off again when she applied to Caltech’s doctoral program. But Ghez prevailed, studying young stars with Gerry Neugebauer, a pioneer of infrared astronomy — an approach that was vital to her later work tracking stellar arcs around Sagittarius A*. After a year as a Hubble postdoctoral research fellow at the University of Arizona, she began her time at UCLA in 1994.

“There’s a reason why I’ve stayed at UCLA all these years,” she says. “To be part of an institution that has been so supportive has made a world of difference.”

Perceptually, the center of the galaxy appears in a sliver of our sky no wider than a human hair. Ghez looks out into it using the world’s largest telescope system, the twin 10-meter instruments at the W. M. Keck Observatory in Hawaii. Access to the telescopes, which are co-owned by the University of California, is another reason why she describes her UCLA appointment as a dream job. Observing used to require regular trips to Hawaii, but in recent years, she and her team have been able to observe remotely from L.A.

Even with powerful telescopes, turbulence in Earth’s atmosphere smears the view of the galactic center into a flickering haze. To see clearly, Ghez has been a chronic early adopter of new technologies, enabled by a tight partnership with Keck Observatory engineers. First, it was software-based speckle imaging, then a succession of advances in adaptive optics, with lasers guiding the telescopes’ segmented mirrors to adjust 1,000 times per second to correct for atmospheric turbulence.

“Hard problems require patience. If it were easy, it would have already been done. Moving the frontier of knowledge forward is just hard work.” Andrea Ghez, UCLA’s Lauren B. Leichtman and Arthur E. Levine Professor of Astrophysics

Of course, novelty brings risk. In 1995, when Ghez was a new faculty member, she proposed using speckle imaging but was turned down. However, as her favorite saying goes, “every challenge is an opportunity.” Ghez persisted — by borrowing telescope time from another astronomer and writing a second proposal that better explained her plans — and she successfully launched the project.

Telescope time is a precious commodity. During the late spring to summer, when Ghez and her team observe the “neighborhood” at the center of the galaxy, each night is special. The 3,000 or so stars whose routes they trace will never be in the same configuration again. Meticulous preparation goes into an observing run, as technical difficulties can sabotage the collection of data — the researchers’ crucial raw material.

Essential to Ghez’s quarter-century longitudinal star study is the work of graduate students and postdoctoral scholars. Her mentorship offers them independence to follow their scientific instincts, while nurturing the shorter-term projects they lead.

“One of the wonderful things about doing research in the university setting is that you’re creating new knowledge — both through the research and by training new scientists,” Ghez says. “So much of training young scientists is about teaching them to find a good problem — one that’s solvable, one that you can sink your teeth into.”

Something else they learn is the need to ensure that their analysis is ironclad. An anomaly can mean a major discovery — or a major mistake.

“Andrea really shaped the way I think about data, about how important it is to get the science right rather than get it out fast,” says Tuan Do M.S. ’06, Ph.D. ’10, a UCLA assistant professor of astronomy and deputy director of the Galactic Center Group.

Ghez has publicly reflected on how winning the Nobel Prize also means the responsibility of being a role model. Her protégés might say that she’s well-practiced.

“I learned a lot about how to be a good scientist from her,” says Angelle Tanner M.S. ’98, Ph.D. ’04, who is now an associate professor at Mississippi State University. “She’s the quintessential scientist, and her approach was inspirational.” 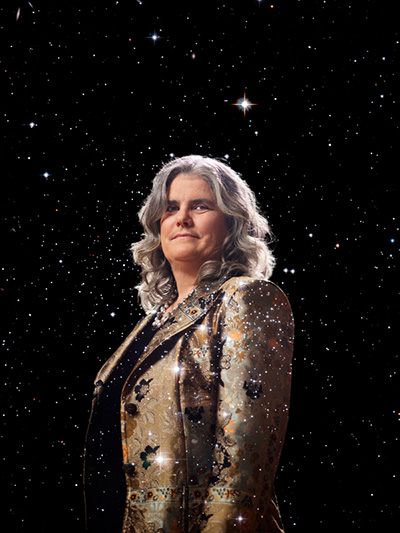 Andrea Ghez’s favorite star is one named S0-2, which takes just 16 years to complete a single revolution around Sagittarius A* — revealing clues to cosmic truths on a human timeline.

Breakthroughs in her Nobel-winning endeavor, as recently as 2019, derived from observations of S0-2. Using its complete orbit to directly measure the supermassive black hole’s gravity, Ghez and her team showed experimental proof for general relativity — although the extremes of gravity promise an eventual breakdown in theory.

“Einstein’s right, at least for now,” she said at the time.

The same study also produced the strongest proof yet that Sagittarius A* is a supermassive black hole. Although alternative theories had been discarded by 2008, the findings confined its immense mass to an area a bit smaller than our solar system, increasing the strength of evidence by a factor of 10 million.

The Nobel Prize isn’t an endpoint for Ghez and her team. There are too many new questions borne of each advance. Their next steps could influence human understanding of nature on a fundamental level.

Black holes have immense gravity — central to relativity — while being unimaginably tiny, suggesting that the eccentric rules of quantum mechanics apply. So the tantalizing possibility arises of using insights about Sagittarius A* to inform a new physics that bridges the two, which are currently incompatible.

The stars’ orbits may also offer a way to detect dark matter, the unseen and little-understood stuff that accounts for most mass in the universe. Another enigma surrounds starlike objects that distort strangely as they pass close to Sagittarius A*.

Meanwhile, the burgeoning field of gravitational wave astronomy is profiling violent cosmic events, such as the collision of binary stars like those at the galactic center, suggesting an opportunity to match those ripples in space-time with infrared observation of the galaxy’s core. Ghez also seeks to untangle the paradox of youth — the finding that stars close to Sagittarius A* are far younger than current models predict.

Tackling all of this, she and her team continue to push the technological envelope and are playing a role in realizing the next generation of even bigger telescopes — all the better to see more stars, more clearly.

After all, the fun of mysteries is in the solving.

The Virtues of Ghez

Colleagues, mentors and protégés of Andrea Ghez weigh in about the ingredients for her Nobel-winning science.

VISION  “She represents the epitome of leadership, and that is what got her to where she is today. As long as I’ve known Andrea, she has been strongly focused on her goals and has always had the take-charge attitude and the personal skills to bring others along with her.”

TENACITY AND PRECISION  “When confronted with difficulties as a graduate student, she always picked herself up again. And the rigor of her work is really quite phenomenal.”

PASSION  “Andrea loves science so much. I’ve never seen anybody more excited about the science that she’s doing. She was right in there with her students all the time because she’s into the details, the puzzle and trying to work out all these little bits and pieces.”

POSITIVITY  “Andrea is very upbeat. Her outgoing personality really helps others in the group feel comfortable speaking up and contributing.”