In California, the people most disproportionately devastated by COVID-19 are Native Hawaiians and Pacific Islanders (NHPIs). They are three times more likely to contract the disease compared to white people and nearly twice as likely to die.

But this is not only a story about health disparities between whites and racial and ethnic minorities in the United States. A deeper look at the data reveals that NHPIs are suffering disproportionately compared not only to white people, but also compared to other Asians. In fact, the infection and mortality rates for Pacific Islanders are alarmingly singular.

There are 1.4 million Native Hawaiians and Pacific Islanders living in the United States. In 11 of the 16 states that track their death rates separately from other Asians, NHPIs are dying at the highest rates of any racial or ethnic group. For doctors, public health experts and, most importantly, the people in those communities, the questions are why, and what can be done?

At UCLA, a groundbreaking study on the tragic impact of COVID-19 on Pacific Islander communities may help researchers and clinicians better understand the virus’s effects on this population and provide more focused treatment, as the battle against the disease enters a decisive phase.

“It’s vital that public health data researchers in the U.S. change how we collect race and ethnicity information in population health surveys. To understand vast differences between the Asian and NHPI experiences, we cannot keep lumping them together,” says Ninez Ponce Ph.D. ’98, director of the UCLA Center for Health Policy Research (CHPR) and a professor of health policy and management in the UCLA Fielding School of Public Health. “If we don’t make this change, we’ll never achieve health equity.”

CHPR pores through detailed health and demographic information to study how laws, regulations and programs affect individuals and communities. The center issues reports that are regularly used by legislators and advocacy organizations in crafting policy. But the utility of those reports is directly related to the availability of the data that the center’s researchers have access to, which is why disaggregating health statistics — or sorting them into more precise demographic groups — could be so powerful. 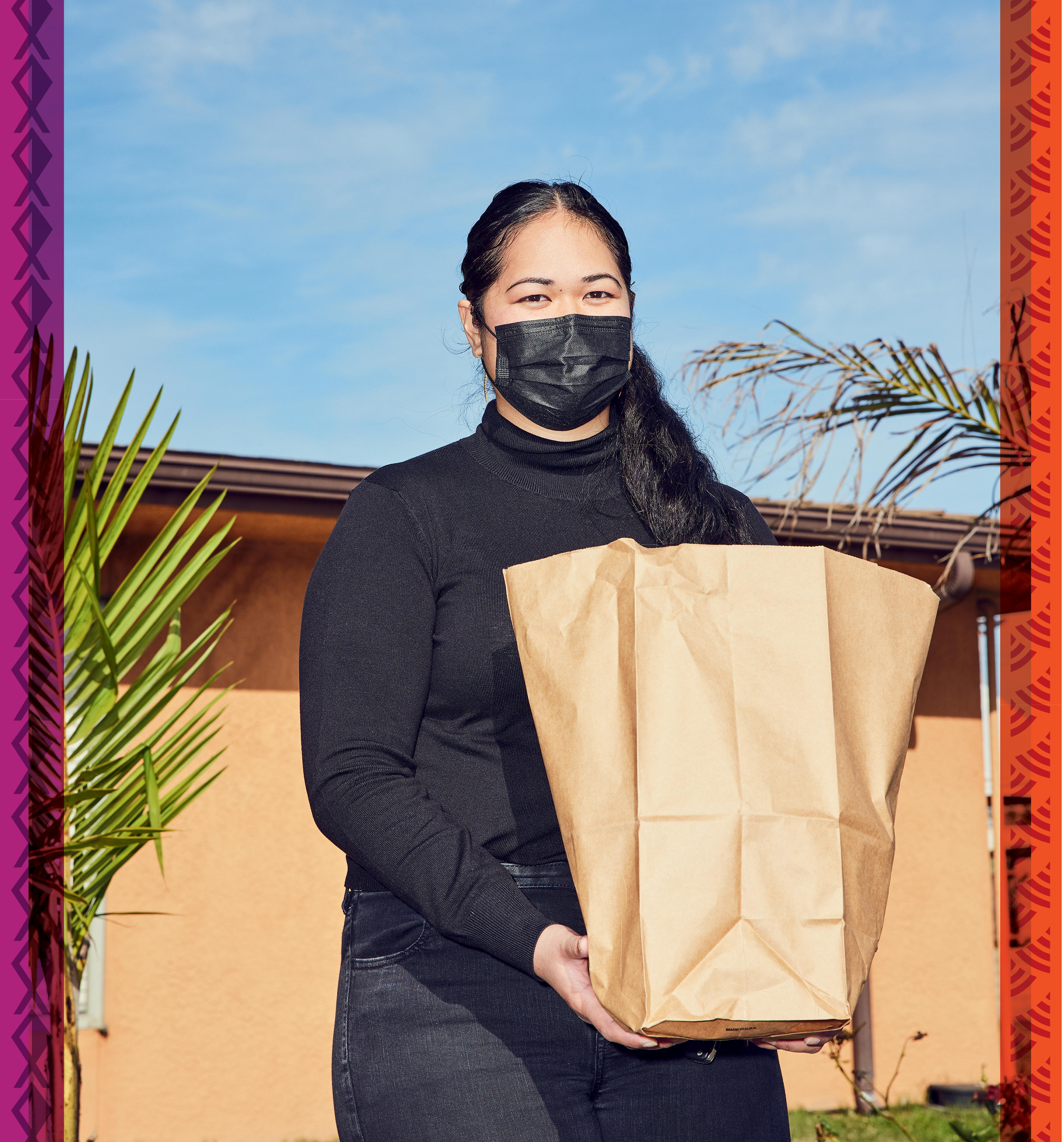 Determining the Scope of the Problem

As the pandemic overwhelmed everything, Ponce heard anecdotally from colleagues across the country (some of whom met every Thursday night on Zoom) about how COVID-19 was ravaging NHPI communities. These groups of passionate professionals — community leaders, doctors, academics and advocates — were determined to figure out how to help their communities, beginning with making others aware of the severity of the problem.

Ponce, a data and health disparities expert, was responsible for collecting and interpreting data on NHPIs. As principal investigator of CHPR’s California Health Interview Survey, the nation’s largest state health survey and a model for data collection on race and ethnicity, she was a natural choice.

Last August, Ponce, working with six student volunteers from around the country, founded the center’s Native Hawaiian and Pacific Islander COVID-19 Data Policy Lab, which would bring the systemic rigor of the center to bear on this crushing problem.

“Health equity is at the core of what I do,” says Ponce, whose experience as a volunteer at the Berkeley Free Clinic changed her life. From her time there, she concluded that health care is a right, not a privilege, and she shifted from pre-med to focusing on access to health care for everyone. “It’s what drives me, what keeps me up at night, and what gives my work and my life meaning,” she says.

The lab’s first step was accurately determining the scope of the problem, which meant finding out infection and morbidity rates. Until researchers and policymakers knew those things, it would be difficult to create policies that would help prevent the spread of the disease among NHPIs. Prior to the launch of the lab’s NHPI-specific COVID-19 dashboard, attempts to get government assistance were regularly stymied. When datasets included NHPIs in the Asians category, the numbers showed that Blacks, American Indians and Alaska Natives, and Latinos were in far more jeopardy.

“Agencies used absolute numbers as an excuse to not devote resources to ensuring the NHPI communities knew how to deal with COVID-19,” says Calvin Chang, former community activist and attorney and now the lab’s data analytics director. Chang was frustrated when health agencies told him that total NHPI infection numbers were so low “you guys should be happy.”

One of the first things the research team learned was that most states were in violation of federal rules that mandate separating health data for NHPI populations from the historically used Asian Pacific Islander category. Only 20 states provide COVID-19 data about NHPIs specifically.

The opportunity to work toward correcting that drew Corina Penaia to her position as the lab’s community engagement and research director. “As a member of the Native Hawaiian and Pacific Islander community, being part of this newly launched NHPI COVID-19 Data Policy Lab has been a blessing and inspiring,” says Penaia, who is working toward her Ph.D. at UCLA. “We are committed to protecting our families, empowering our community with knowledge and providing actionable data to advocate for the health needs of NHPIs.”

For Native Hawaiians Pacific Islanders in California, the COVID-19 death rate was 182 per 100,000 people, which is the highest of all other racial and ethnic groups.

Ponce had recruited the trio at the recommendation of Dr. Raynald Samoa, director of the national Pacific Islander COVID-19 Response Team. Samoa had cited the lab’s data when he testified before the U.S. House of Representatives’ Ways and Means Committee in May 2020, discussing the need for resources to help NHPIs cope with how the pandemic was affecting their communities.

With the addition of Chang, Penaia, Thomas and three student volunteers — UCLA medical student Vananh Tran and the University of Chicago’s John Greer and Nicholas Pierson — Ponce was able to transform what had initially been an informal passion project into a fully supported research team that could leverage CHPR’s resources.

After compiling rates of infection and morbidity, the team had to dig out the underlying factors that would explain why Islanders were suffering in such disproportionate numbers. A study of non–COVID-19 health data was an illuminating, if worrying, start:

Both of those health factors make NHPIs more vulnerable to COVID-19. And cultural traditions play a role as well, NHPI researchers note. Many NHPI families live together in multigenerational households, which makes them more vulnerable to a disease like COVID-19, which is spread through droplets in the air. 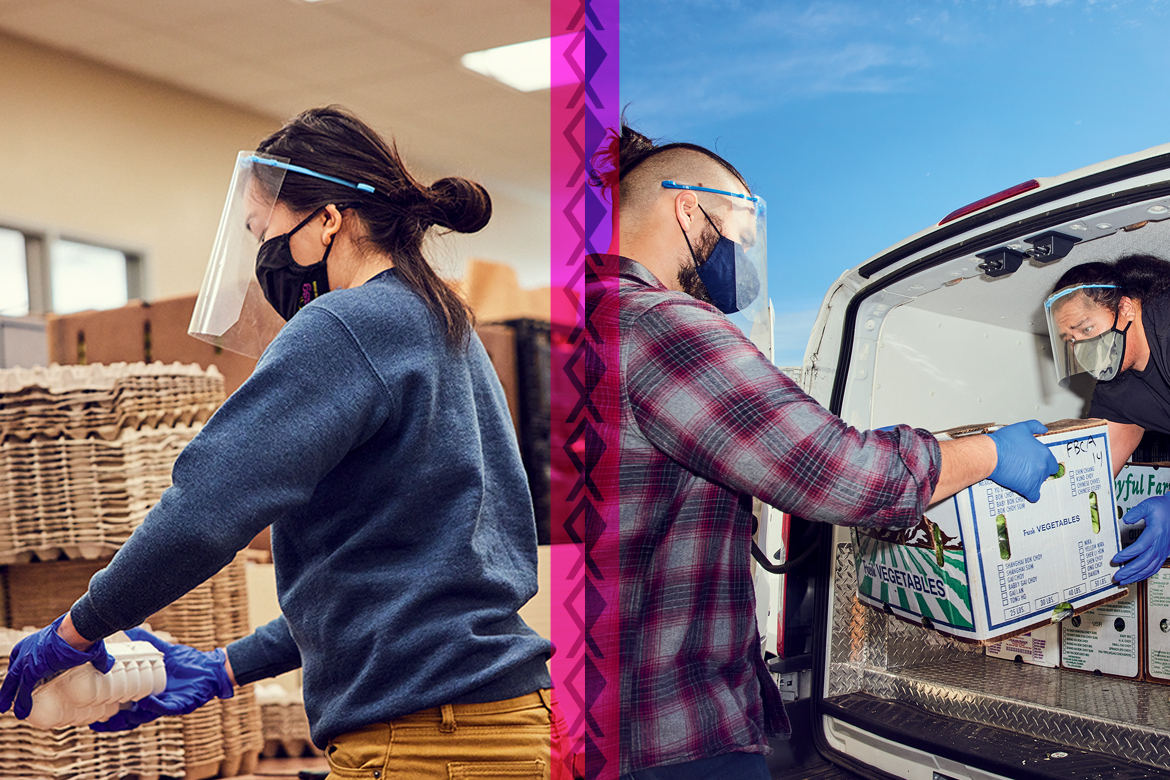 But preexisting health conditions and living in multigenerational households are not enough to explain everything that is happening, Ponce says. Consequently, the team has been collecting other data, such as employment and education statistics, and looking at where Islanders work — a large number are in the health and services industries and the military, all of which have their own specific challenges.

“We are building data to cast light on the wider issues of social equity and justice, of which the health issues are a deadly manifestation,” Ponce says.

Data Are More Than Numbers

Collecting data starts with going into the communities. But presence isn’t enough; there has to be trust. This is something the lab’s NHPI researchers can build more easily with NHPI communities, which have historically been harmed by the institutional racism in the U.S. health system and the failure to recognize them as distinct peoples.

For Thomas, who grew up among her mom’s Samoan community, traditional events like funerals, weddings and religious ceremonies always meant lots of people. “These gatherings are prioritized in our ways of life, especially for NHPIs in the U.S. diaspora,” says Thomas, who was president of UCLA’s Pacific Islands’ Student Association as an undergraduate. Even as COVID-19 infection rates spiked, Thomas says few people would wear masks at these events, and, as a result, she knows people who contracted the virus. 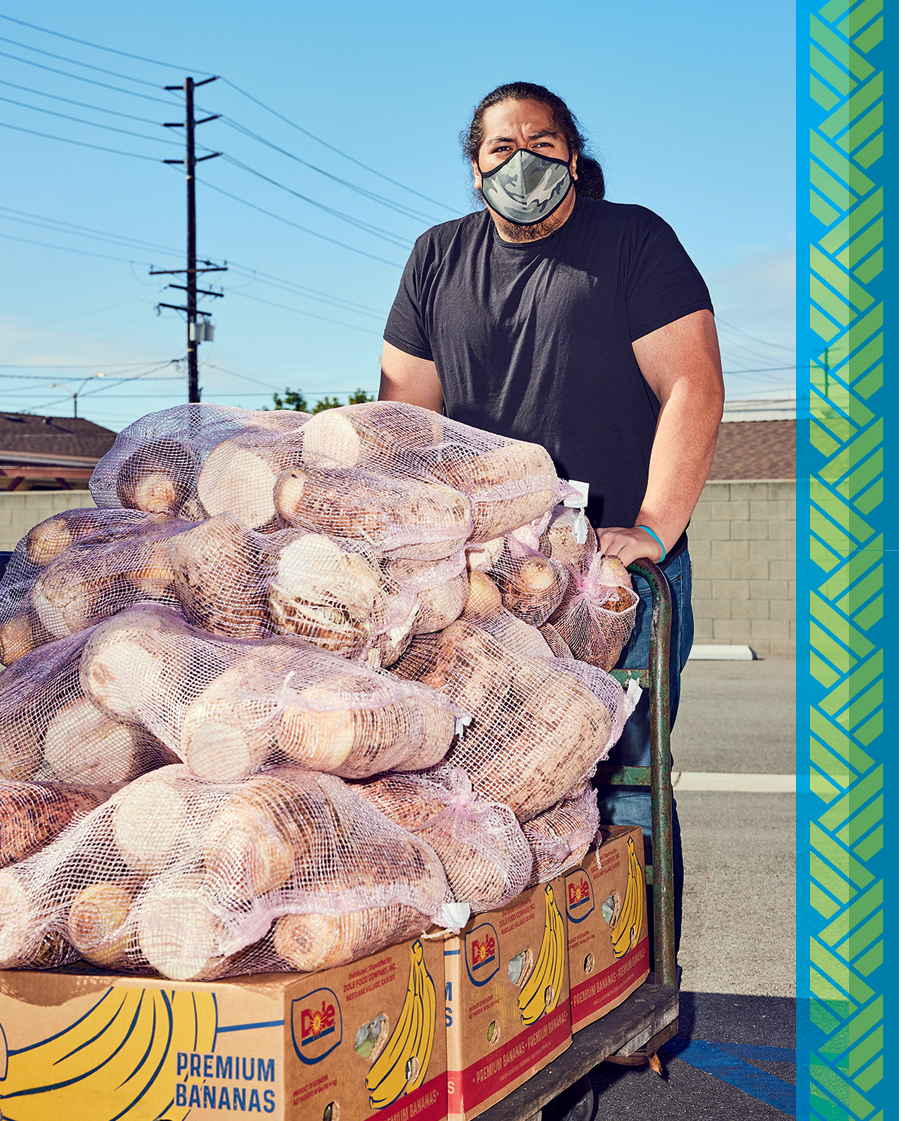 “Although COVID-19 messages and guidelines are widespread, messaging is generalized, and it doesn’t feature NHPI faces or touch community values,” Thomas says. “It also doesn’t help that there is a language barrier when these messages reach trusted messengers of the community, such as our faith-based leaders, many of whom are primary NHPI-language speakers.”

A forthcoming paper from the NHPI Data Policy Lab combines traditional data analysis with narrative anecdotes as well as artwork by Islander artists.

“We have to ensure that qualitative data is as valued as the quantitative data,” says ’Alisi Tulua, who joined the lab as project director last year. “We combine stories and raw data in a way that has not happened before. And we stay in the community and share everything we find with them, which also has not always happened before.”

Thomas, who had been helping to set up COVID-19 testing sites across Southern California, says that this commitment to the community has allowed the NHPI Data Policy Lab team to build an online platform of NHPI data that community leaders and health officials can see, understand and, most importantly, act upon. 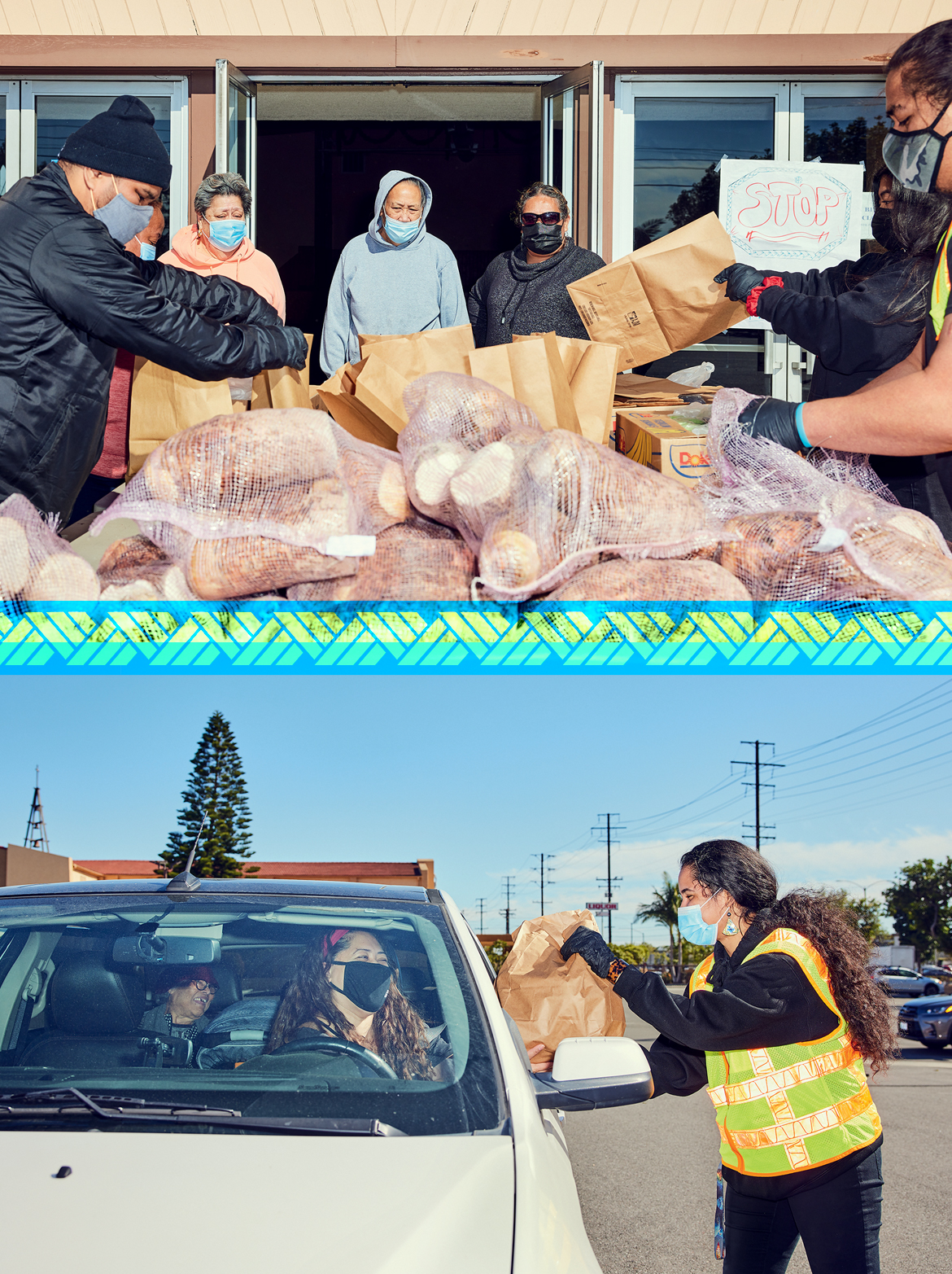 Ryan Young
From top: The team arrives at the Malamalama Ole Lalolagi Church to package the fresh vegetables for distribution. Amelia Vernon ’20 distributes food to members of the community.

The lab’s work has already contributed to fulfilling CHPR’s mission of compiling and analyzing data that can assist lawmakers, community leaders and advocates.

The NHPI Data Policy Lab team worked with the Arkansas Coalition of Marshallese to help the group prepare its case for funding from the federal Coronavirus Aid, Relief and Economic Security (CARES) Act. During the early surges of the pandemic, the people hailing from the Marshall Islands who live in Springdale, Arkansas, had been suffering with both sickness and unemployment.

“The UCLA team helped with the organization of the information we needed,” says Melisa Laelan, executive director of the coalition. “UCLA was great, because they listened to us and knew how to help us help ourselves.”

In recent months, UCLA’s NHPI Data Policy Lab has rescued critical data from the dark corners of bureaucracy, deploying this knowledge to make cases for aid and improve lives in NHPI communities from Arkansas to Utah to the state of Washington. So, what’s next?

Echoing Ponce and the NHPI Data Policy Lab team, U.S. Reps. Ayanna Pressley and Barbara Lee and Sen. Elizabeth Warren acknowledge that the federal government doesn’t have the information it needs to confront the racial disparities in health outcomes. In February, they reintroduced the Anti-Racism in Public Health Act, a bill they sponsored last year. One of the bill’s key goals is to expand research about the impact of the coronavirus by race, which will help shape health policy that is anti-racist. 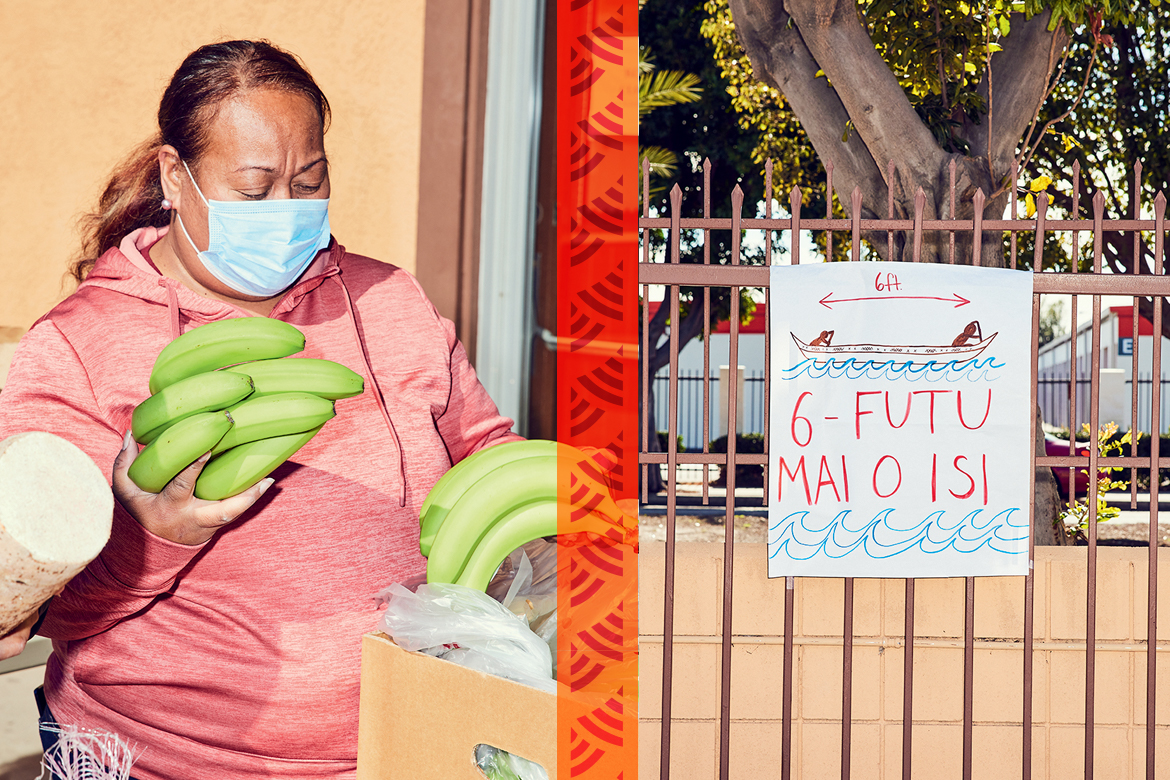 In January 2021, the lab’s researchers were awarded a $500,000 “quick strike” grant from the Robert Wood Johnson Foundation to create a health research toolkit that can be adopted across the nation.

They know the problems, including the cultural imperative to honor family members at funerals, as well as skepticism about the vaccine. And, having listened to pastors and community leaders, they are devising some of the solutions. Most importantly, there are connections that did not exist 12 months ago, Ponce says. “In a terrible way,” she says, “COVID-19 may turn out to be a transformative moment.”