Cowgill headed a UCLA Fielding School of Public Health team contracted in 2014 to work on tobacco prevention in Los Angeles Unified School District middle schools. But as the project launched, e-cigarette use — also known as vaping — was beginning to soar. “What struck me when we started going into schools was that vaping could be so discreet,” says Cowgill, an adjunct assistant professor and health specialist in the UCLA Prevention Research Center.

Vaping involves the heating of a liquid — typically containing nicotine or cannabis, as well as flavorings and additives — to produce an aerosol mist that’s inhaled through a battery-powered tube. The modern electronic cigarettes, patented in China in 2003, hit the U.S. market four years later and have grown from fad to phenomenon. Today, nearly 9 million Americans vape.

The Centers for Disease Control and Prevention (CDC) recently said that although the number of teenagers smoking tobacco has fallen to historic lows, more than 1 in 4 high school students have vaped in the last 30 days.

For some kids, it is both fun and cool. The product comes in crazy flavors — more than 7,700 at last count — with fruit, mint and menthol flavors dominating sales, says the CDC. There are also exotic flavors, such as “unicorn vomit” (a tangy melon flavor, reportedly), sweet fruit punch and cookie combinations.

“Vaping seems so harmless,” middle schoolers told Cowgill, whose group began to focus more on vaping than on traditional tobacco cigarettes. “They thought, ‘This is just water, so it can’t be bad for me,’” Cowgill recounts. “Teens are bored, and this starts as something they can do. Then they get hooked on the nicotine and can’t go without it.” 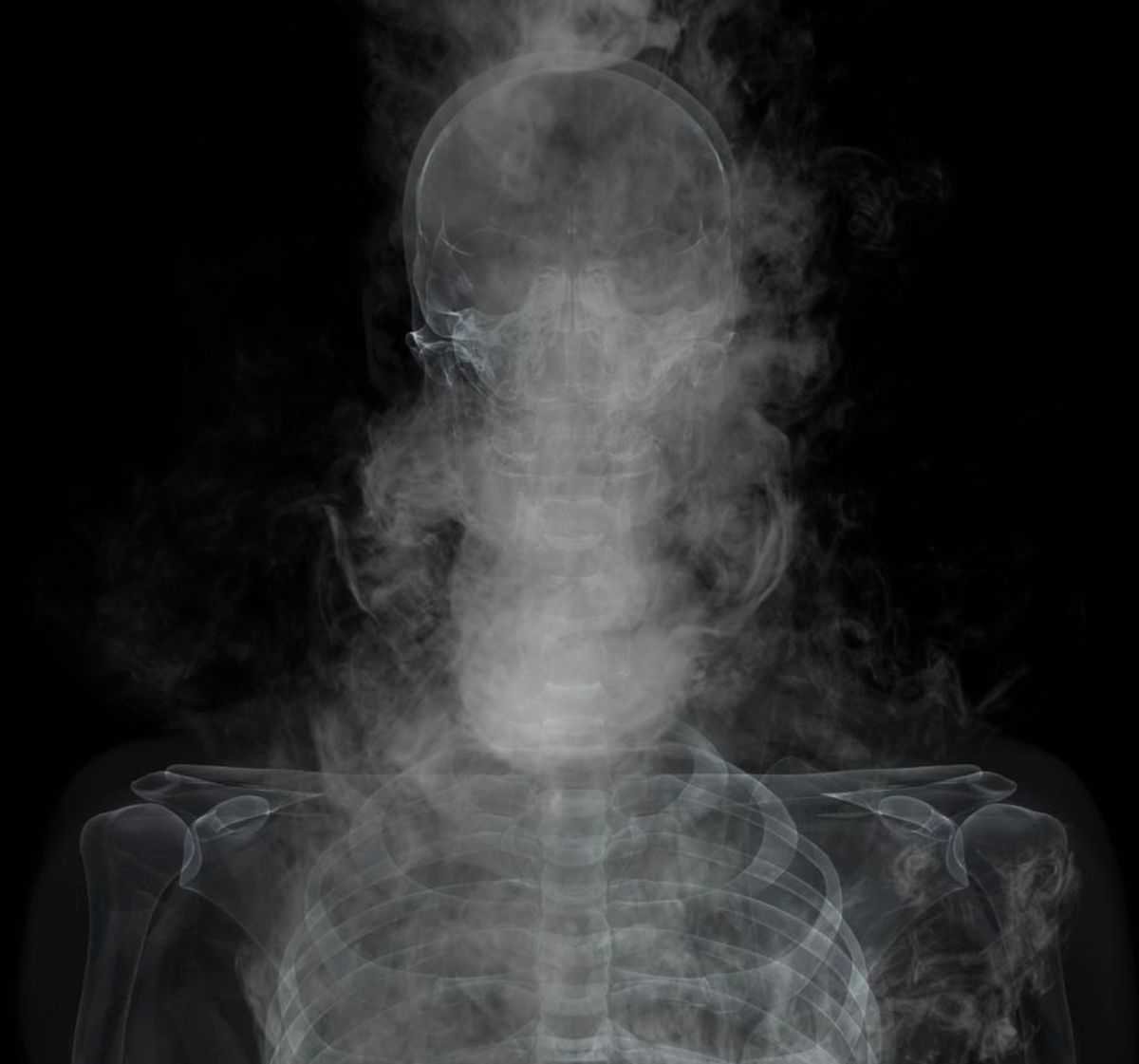 Justin Fantl
“Teens are bored, and [vaping] starts as something they can do. Then they get hooked on nicotine and can’t go without it,” says Burt Cowgill, an adjunct assistant professor and health specialist in the UCLA Prevention Research Center.

The Heart of the Issue

Until recently, there was a sense that e-cigarettes were safer than the combustible nicotine–delivery systems, which the CDC said in 2018 lead to 480,000 deaths in the U.S. every year.

For many, this is the heart of the issue. It is clear that by delivering nicotine or cannabis through an aerosol rather than the chemical change agent that is combustion, e-cigarettes avoid many byproducts that damage the heart and lungs.

Holly Middlekauff, a UCLA cardiologist who studies the impact of both electronic and combustible cigarettes, said there were more than 70 known carcinogens in tobacco smoke, but far fewer in e-cigarettes.

In 2017, however, Middlekauff and her colleagues reported that habitual vapers displayed higher levels than non-vapers of adrenaline in the heart, which can lead to a heart attack or arrhythmia. “The levels of nicotine that people achieve in their bloodstream is comparable between tobacco cigarettes and electronic cigarettes. Nicotine is addictive and may be associated with adverse cardiovascular events. More research is needed to clarify this,” Middlekauff says.

It is also far from clear what impact chronic vaping has on the lungs.

Steven Dubinett, a pulmonologist and UCLA’s associate vice chancellor for research, and his colleagues received early funding from the Food and Drug Administration to conduct a Boston University study on the pulmonary effects of vaping. They found alterations in gene expression similar to the changes that occur with exposure to tobacco cigarettes.

Given all the different flavors and chemicals in e-cigarettes, Dubinett says it’s nearly impossible to accept broad conclusions about their safety. “Because they are not regulated, the label on an e-cigarette cannot necessarily be trusted,” he warns.

Yifang Zhu Ph.D. ’03, a Fielding School professor who has examined the composition of emissions, notes that the two major components in e-cigarettes are the food grade chemicals propylene glycol and vegetable glycerin. “We understand these as they relate to the gastrointestinal tract, but it’s very different when those oils are dispersed into tiny particles that go into the lungs,” she says. Zhu’s research includes assessing secondhand exposures in vape shops — the one public space in California where vaping is freely allowed. “People tend to think that because nothing is burning when you hold the e-cigarette, no one else is exposed,” Zhu says. “But we have found that when users exhale, there are significant exposures.” So just by stepping into a vape shop, you could breathe in nicotine or cannabis.

It has been argued that vaporizing cannabis decreases some risks associated with smoking it. “Early studies demonstrated that vaporizing plant cannabis seemed to reduce some of the negative pulmonary effects associated with smoking it,” says Ziva Cooper, associate professor-in-residence in the Department of Psychiatry and Biobehavioral Sciences and research director of the Cannabis Research Initiative in the Jane and Terry Semel Institute for Neuroscience and Human Behavior at UCLA.

That’s less clear following the recent outbreak of lung illnesses, many of them associated with e-cigarette cartridges containing THC, a cannabis compound that works on brain receptors — or, to put it simply, the element in weed responsible for the “high.”

Cooper was part of a National Academies of Sciences, Engineering, and Medicine committee that wrote a 2017 report on the health effects of cannabis. But there are problems assessing vaping, she says, because there are few long-term studies. It’s also complicated by the split between products sold in mainstream stores and cut-price street market or internet-sourced devices.

These self-described “bootleg” devices are often made with ironically dubbed “artisanal” ingredients, which could include anything. There’s also a subculture that tinkers with recipes to boost the vaping effects. It’s difficult to know what’s in those products.

At press time, vaping has been linked to more than 35 deaths and nearly 2,000 reports of lung damage. But some of the victims have other risky habits as well, says the CDC, so it’s complicated.

The Vapor Mist Is Rising

In the past, the CDC said vaping nicotine could help wean smokers off the habit. But that evidence appears increasingly cloudy.

A large-scale clinical trial, published in the New England Journal of Medicine in 2019, found that 18% of smokers who used e-cigarettes to stop smoking remained tobacco-free a year later. This contrasts with 10% who tried to quit with traditional nicotine-replacement products. But 80% of the e-cigarette group was still vaping, suggesting they had traded one addiction for another.

Before the current health concerns, Michael Ong was already worrying that vaping was luring another generation to nicotine.

Ong believes that manufacturing the products in candy flavors creates a gateway to vaping for teens. Under pressure, companies are withdrawing some flavors, and authorities may ban them altogether — echoing the 1997 Joe Camel legal battle, in which tobacco giant R.J. Reynolds agreed to withdraw a cartoon symbol as familiar to young children as Mickey Mouse.

This concern has intensified with the rise of San Francisco’s Juul Labs, which quickly became a dominant player when it entered the market in 2015. Its secret weapon was the 59-gram Juul pod, which is sleek and slim like a USB drive and has been called the iPhone of vaping. By using a vape liquid made from nicotine salts, a Juul pod delivers the equivalent of a pack of cigarettes in a single, stylish tube.

That set off alarm bells. Larissa Mooney, director of the Addiction Psychiatry Clinic at the Semel Institute, points out that “nicotine use during adolescence may cause harm to the developing brain.”

“There is evidence that nicotine increases the risk of attentional deficits and reduced impulse control,” she says. “It may also prime the brain for other substances to be more pleasurable.”

Ong views California’s tobacco-control program as a positive model — only Utah has a lower rate of smoking.

Yet, across the nation, the vapor mist is rising. The number of vapers age 18 or under doubled between 2017 and 2018. “We still have to reach the population using these devices with research that is just emerging. If you survey youths, they will universally tell you traditional cigarettes are bad, but it will take time to reach them about vaping,“ Ong warns.

Rather than the shock campaigns of the past, which show the graphic injury caused by smoking, more sophisticated approaches are needed for vaping. Anecdotal evidence suggests teens are more amused than scared by recent public service announcements showing “brain worms” driving their peers insane. The baseline message — nicotine hijacks its target, no matter how it’s delivered or how old the imbiber — has yet to reach its audience.

An editorial in Commentary magazine was not alone in calling recent class actions and CDC warnings “a moral panic.” The often-contrarian publication argues that, in moderation, e-cigarettes deserve to remain an adult choice alongside alcohol, marijuana (in some states) and cigarettes.

Right now, the CDC is advising vapers to put down their e-cigarettes until the science becomes clearer. What we will learn and when — and who will listen — remain as intangible as a mist.