“My family has a complex migration history,” says Marike Splint, an assistant professor at the UCLA School of Theater, Film and Television. “Our familial notion of what ‘home’ is has always been fluid.”

Splint, who is of Dutch, French and Tunisian ancestry, has found home on both sides of the Atlantic. Born and raised in the Netherlands, she moved to New York in 2004 to pursue a master’s in directing at Columbia University. She then returned to her homeland until 2015, when she came back to the U.S. to join the faculty at UCLA.

Her peripatetic background also informs her art. Fascinated with pieces that are performed outside of traditional venues, she has become a renowned creator of site-specific theater.

“I have an interest in how we relate to place, how places shape us and how we carry places within us,” Splint says. “Tackling these questions in the actual locations in which they live, such as public parks, markets or civic centers, you can get the essence of an area that is hard to recreate when you work inside of a theater space.”

In an interview, Splint spoke about what inspired the piece, how it relates to her previous work and how it connects to the COVID-19 pandemic. Answers have been edited for clarity and length. 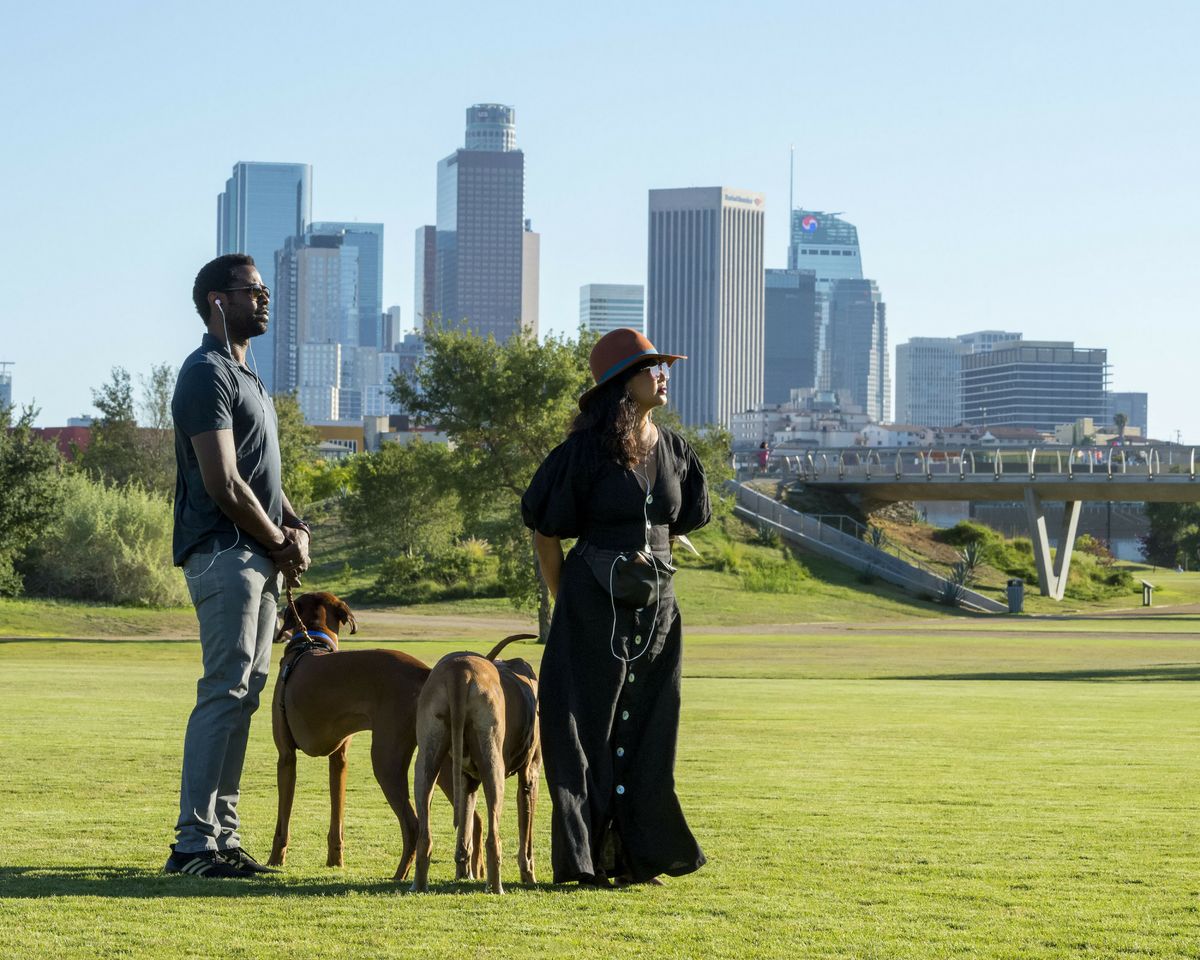 Center Theatre Group contacted me in November. They were familiar with my work and asked me to do something to facilitate the transition back to live theater but in a way that wouldn’t create stress for people who might not yet be ready to see a performance in a crowd.

How would you describe the audience experience?

Audience members start by downloading the “32 Acres” app to their phones. The app is geolocated, so the content is triggered only when you go to the park, and specific elements in the park generate thoughts or observations that evolve into larger questions.

I am the narrator and my voice takes you through the park. The language has a poetic, essayistic style. During your walk, the experience unfolds seamlessly, and the park becomes a canvas to reflect on the year we have had.

In 2020, during the pandemic, you created “You Are Here” for La Jolla Playhouse. It was billed as “a road trip around the world via Google Earth.” Is there any correlation between the two projects?

Not in an official way, but I really see them as a diptych. “You Are Here” captured a moment of us going into isolation at home. It’s only been a year, but it feels so old now because of everything that has happened since.

“32 Acres” tries to capture how we as a community deal with the year we just had. Sometimes, it seems as if everything is the way it was before, but it isn‘t. So it also poses the question of “How do we deal with the past?” That is a question that resonates in the park and in the city of Los Angeles, too.

Los Angeles has a tendency to erase its own history and turn toward the future. And that’s true at the park in particular.

The park used to be a flood plain from the Los Angeles River and it’s the former site of the first terminal of the Southern Pacific Railroad from  the 1800s. They’ve done architectural digs there that were later covered up. So there are a lot of intriguing elements that aren’t visible, and when you walk in the park now, you’re walking on top of archaeological findings, which allows for a more associative relationship to its history.

What kind of research went into the project?

We talked to the park’s landscape architect, to rangers who work there, to archaeologists who helped with the digs, and to one of the California State Parks historians. We also took a lot of walks through the park at different times of day to figure out logistics: How is the park organized? Where does it make sense to enter? What is the dramaturgy of the space?

Additionally, Jonathan Snipes crowdsourced thoughts about Los Angeles and those recordings made it into the experience.

You’ve also invited audience participation. How are you incorporating visitors’ thoughts on the pandemic?

When you get to the final site in the park and look at your screen, we ask two questions in reference to the past year: “What do you want to remember?” and “What do you want forget?” We’re posting their responses on the app and on our website so audience members can see what others are saying.

What do you want to remember about the past year?

In the beginning of the pandemic, particularly, there was a moment of really checking in with everyone. In the conversations that I had, even with people I saw regularly, “How are you doing?” was a real question. There was a lot of space for a type of conversation that, in our normal daily routine, we don’t have time for. I want to remember that moment of connection.

What do you want to forget?

What gave me most anxiety in the early days of the pandemic was not knowing where the danger was, whether it was wearing gloves outside or wondering if it was safe to breathe. I have a much more realistic risk assessment now. But that invisible sense of danger was something I had never experienced before.

“32 Acres” is free to the public and is open through Sept. 29 at Los Angeles State Historic Park. Visit the show’s website for more information.