A new exhibition at the Fowler Museum at UCLA will present colorful yarn paintings and ritual objects inspired by mythology and shamanic visions from the Wixárika people of Western Mexico.

The “Fowler in Focus: The Spun Universe: Wixárika (Huichol) Yarn Paintings” exhibition chronicles artistic production by the Wixárika people, commonly referred to as the Huichol, from mid-20th century to the present day. It opens Aug. 14 and runs through Dec. 4 and highlights early works by Ramón Medina Silva, which are filled with vivid depictions of the Wixárika cosmos.

Since the 1960s, Wixárika artists have garnered international acclaim for their “nierakate,” paintings composed of colorful yarn attached to wooden boards with beeswax. Inspired by mythology and shamanic visions associated with the use of the hallucinogenic “divine cactus,” peyote, the paintings are thickly populated with images of sacred animals, humanoid ancestral figures, holy plants and important ritual objects. 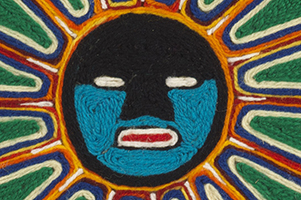 Fowler Museum at UCLA
This close-up shows the individual pieces of yarn in the works.

The bulk of the Fowler collection of nierakate was acquired in the mid-1960s by the UCLA-trained anthropologist Peter Furst after he met the self-described Wixárika apprentice “mara’kame” (shaman) Ramón Medina Silva and his wife, Guadalupe de la Cruz Ríos. While recording indigenous mythological narratives as told by Medina Silva, Furst prompted him to illustrate the sacred stories. This innovation ultimately reshaped both outsider and insider understandings of yarn paintings, and Medina Silva became globally renowned for his ability to translate Wixárika belief and ritual into stunningly arranged strands of spun fiber.

The Fowler Museum at UCLA is one of the country’s most respected institutions devoted to exploring the arts and cultures of Africa, Asia and the Pacific, and the Americas. The Fowler is open Wednesdays, from noon until 8 p.m. and Thursdays through Sundays, from noon to 5 p.m. The museum is closed Mondays and Tuesdays. The Fowler Museum, part of UCLA Arts, is located in the north part of the UCLA campus. Admission is free. Parking is available for a maximum of $12 in Lot 4. For more information, the public may call 310 825-4361 or visit fowler.ucla.edu.

Learn about rich and varied cultural traditions across Mexico through song and performance. Explore “Intersections” to find amazing works of art from all over Mexico and admire the beautiful swirling, rainbow yarn paintings in “The Spun Universe.” Be inspired and create a work of art with yarn.

Patrick Polk, Fowler curator of Latin American and Caribbean Popular Arts, will lead a discussion of the brilliantly colored yarn paintings of the Wixárika (Huichol) peoples of Mexico — works inspired by mythology and shamanic visions.