Today, these masks are worn in spectacular masquerades performed by communities throughout Guatemala during indigenous festivals, Catholic feast days and secular events. Frequently sponsored by religious organizations known as cofradías, many of these dance-dramas (bailes or danzas) date back to at least the colonial era (1523–1821). Elaborately costumed and often highly scripted, the performances bring to life sacred narratives and popular histories, and serve as public expressions of devotion and communal identity.

The exhibition will run from April 7 through Oct. 6 in the Lucas Gallery at the Fowler Museum at UCLA.

The works on view draw their powers from the interplay of disparate cultural forces and their collective influence. The eyes of masqueraders become those of sacred deer and jaguars, saints and serpents, Spanish conquistadors and Maya warriors, cowboys and bulls, and countless mischievous monkeys — all of whom viewers are given the opportunity to meet face to face. The exhibition also includes hand-written scripts that guide performances as well as photographs taken by Jim and Jeanne Pieper during research trips. Together with the masks, this material introduces a cast of historical, mythical, and archetypal characters that integrate indigenous Maya, colonial Spanish and post-colonial Guatemalan elements.

“For more than 50 years, Jim and Jeanne Pieper have traveled to Guatemala, attending festivities across the country, and meeting with carvers, masqueraders and Maya priests to assemble a collection of masks that retain their energy from years of use,” said Marla Berns, Shirley & Ralph Shapiro Director of the Fowler Museum at UCLA. “Their documentation adds immeasurably to the value of this collection, and its potential for future study and teaching.”

The exhibition is organized by thematic groupings of masks mounted at eye-level, with each group representing a series of characters from well-known dance-dramas. An introductory section also explores morerías, local family-owned businesses that fabricate, repair and rent costumes and masks — most of them adaptable for use in multiple dances. As local cultural institutions, morerías have long played a key role in the continuation of community celebrations.

The next three sections are devoted to historical encounters, by way of the Dance of the Moors and Christians, the Dance of Saint George and the Dragon, and the Dance of the Conquest. These dances present histories of conflict and inequality — difficult legacies that continue to shape the lives of Guatemalans. 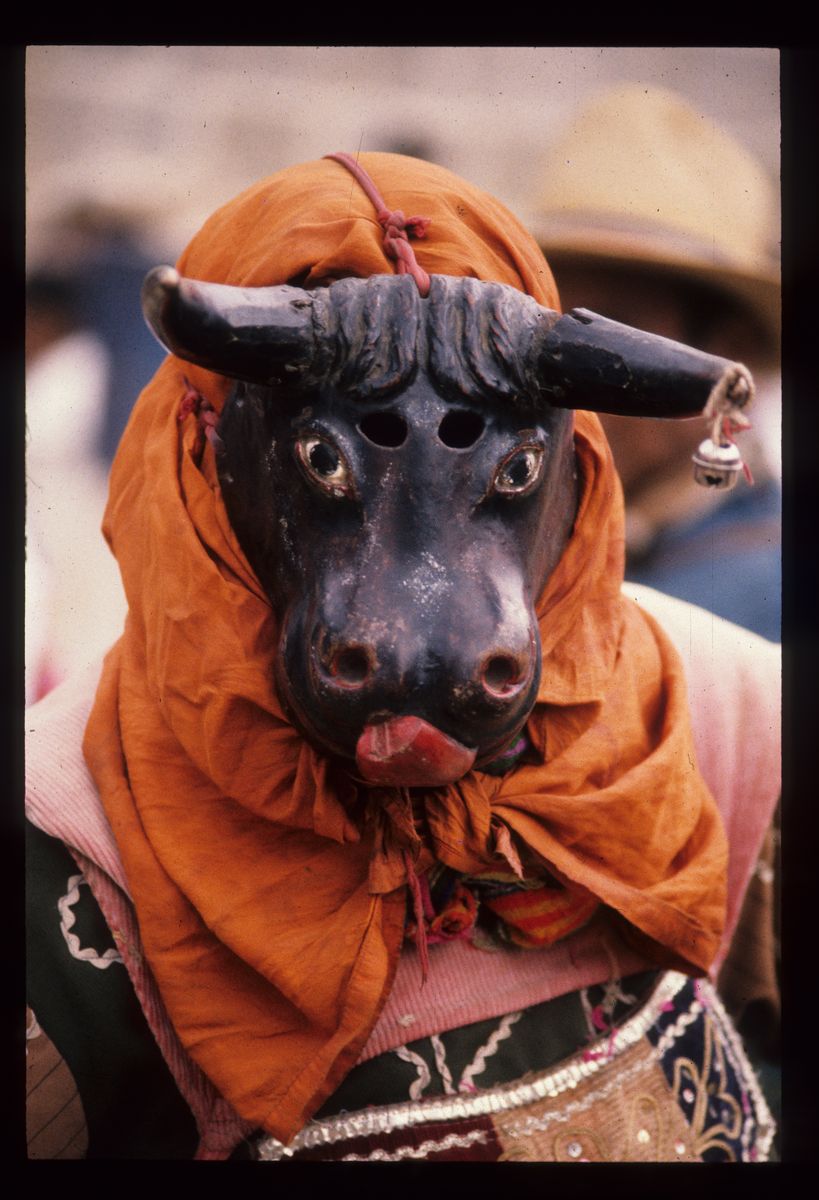 The Dance of the Moors and Christians re-enacts the ascendancy of Catholicism and the end of Muslim rule in Spain in the 15th century with caricatured masks of men with hair painted either dark brown or a metallic gold to denote their affiliation.

The Dance of Saint George and the Dragon portrays the venerated Catholic martyr who waged an epic battle against an unholy beast. Introduced by Spanish missionaries, this Christian legend in part condemns indigenous ritual and belief.

Ten masks illustrate the Dance of the Conquest, which re-enacts scenes from the conquest of the Maya kingdoms of Guatemala from 1523–1530. The war between K’iche’ Maya and Spanish forces came to a close with the death of the legendary feather-adorned ruler Tecún Umán at the hands of the blond-haired conquistador Pedro de Alvarado.

San Simón, also known as Maximón, is an immensely popular folk saint best understood as a blending of the belief systems of the indigenous Maya and Spanish Catholicism. Altars or shrines for San Simón are adorned with seated effigies, the largest of which may feature masks. Adherents leave flowers, cigarettes, beer and other gifts. This section of the gallery includes carved wood and stone masks and two fully clothed doll-sized statues arranged to suggest a traditional setting with alcohol, money, cigars and candles.

The final section — Dancing Animals — explores the dances that enable maskers to highlight human-animal interactions such as animal husbandry and hunting that have shaped everyday life in Guatemala. The Dance of the Little Bull and the Dance of the Cowboys reflect on the evolution of Guatemalan cattle culture. Nostalgic and often satirical, these dances play out farcical and tragic scenes of Spanish-influenced ranch life with masks of young cowboys, elder hacienda owners and fearsome bulls they must confront.

Arguably the dance most closely linked to pre-Hispanic Maya ritual theater is the Dance of the Deer. In this dance, a human hunter, a dog, a ferocious jaguar, a meddlesome monkey and an otherworldly turquoise deer with a red nose and golden antlers dramatize the struggle between humans and animals for survival. The performance is also a symbolic quest to provide proper offerings to holy figures.

The exhibition closes with a menagerie of animals that morerías keep in their inventory: bulls, tigers, elephants, coyotes, rabbits, and raccoons that enable maskers to wear guises of nonhuman figures central to traditional Maya religion and animal personae representing archetypal personalities or moral characteristics.

“Guatemalan Masks: Selections from the Jim and Jeanne Pieper Collection” is organized by the Fowler Museum at UCLA and curated by Patrick Polk, curator of Latin American and Caribbean popular arts.

The exhibition is generously supported by a gift from the Pieper Family with additional funding from the Donald Bush Cordry Memorial Fund and the George R. and Nancy L. Ellis Endowment.

All works on view are part of the Jim and Jeanne Pieper Collection, a promised gift to the Fowler Museum at UCLA.