An exhibition on view now at the Fowler Museum at UCLA is the first U.S. solo exhibition of work by Congolese artist Gosette Lubondo.

Lubondo’s captivating photographs take a probing and poetic look at the intersections of space and memory, and the tensions between Congo’s problematic past and complicated present. They bear the traces of postcolonial neglect yet suggest a more hopeful future, while leaving viewers space to draw their own conclusions from the images.

Lubondo, who was born in 1993 in Kinshasa, Congo, is a rising force in the contemporary art world who has earned critical acclaim for her work; among other honors, she won the Contemporary African Photography Prize in 2020.

“The way Lubondo plays with density, depicting some figures as firmly present and others as spectral, creates a tension in her work and elegantly evokes the imaginary she references in the title of the series,” says Erica Jones, the Fowler’s curator of African arts. Jones cocurated the exhibition with Elaine Ericksen Sullivan, a postdoctoral curatorial fellow at New York’s Metropolitan Museum of Art.

In “Gosette Lubondo: Imaginary Trip,” two photographic series unfold in abandoned structures: a train car and a school. Congo was a Belgian colony from 1908 to 1960, and the Belgian-run train network and the schooling system became integral components of an enterprise that extracted much of the country’s wealth.

But the rail system slowly fell into disrepair in the decades after Congo won its independence, and today travel by train has largely ceased. In “Imaginary Trip I” (2016), Lubondo meditates on her country’s past, present and future, as she infuses a decommissioned train car with renewed life. 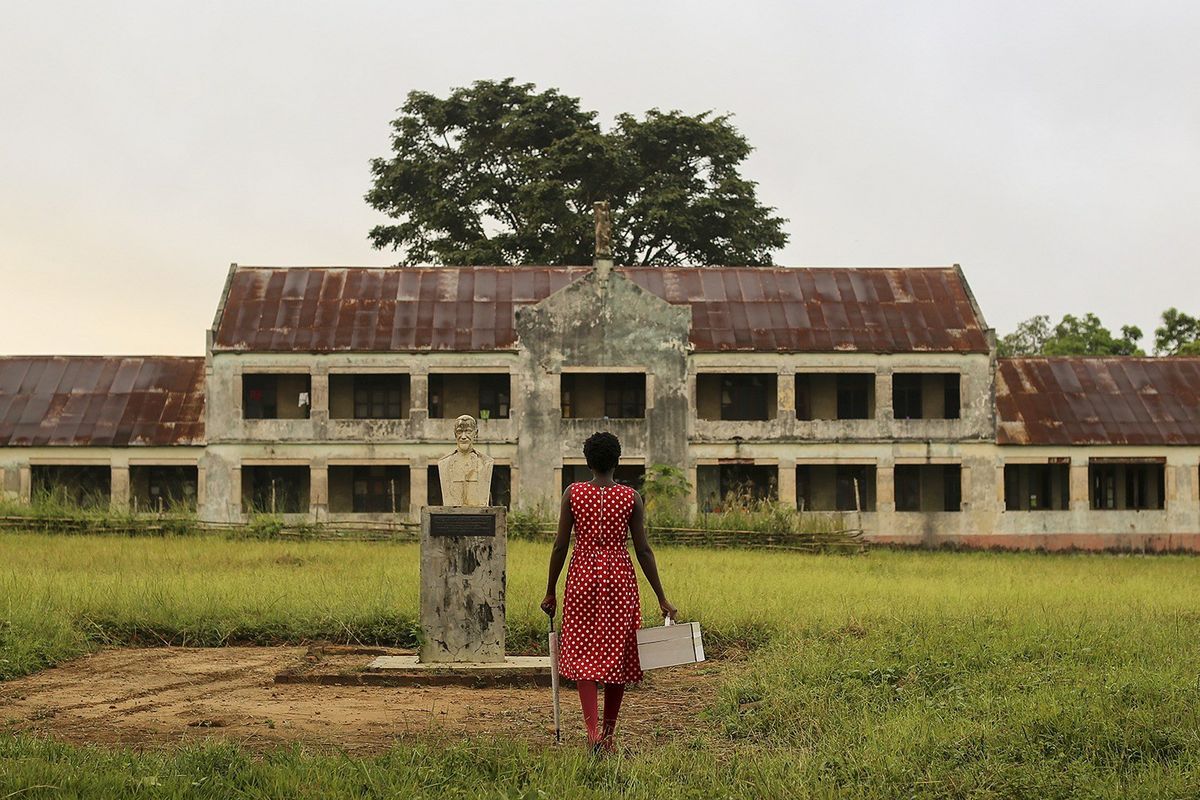 Courtesy of Axis Gallery
“Imaginary Trip II” takes place in a deteriorating school that once educated hundreds of children.

“Imaginary Trip I” (2016) depicts travelers represented by Lubondo in different guises. A character named Elikia (which means “hope” in Lingala, one of Congo’s four national languages), clad in a red dress, serves as the viewer’s guide, moving between the past, present and future. At first, Elikia is alone in the car. With each successive photograph, the train car appears increasingly populated by passengers whose clothing styles make them hard to place in a particular time period. They read books, drink tea, carry shopping bags, sleep and stare out the window.

In the final image, the car is once again emptied of passengers but littered with photographs of faces.

With the rapid urbanization in Congo’s postindependence era, the number of students in rural schools dwindled and campuses were left to decay. Lubondo’s “Imaginary Trip II” (2019) takes place in a partly abandoned and deteriorating rural school, which once educated hundreds of children. Observed by Elikia, spectral pupils engage with tangible ones in a variety of activities: lining up before the school doors, attending classes and playing in the yard during recess.

The more transparent figures exist out of time: Perhaps they are students of the past or students of a future when these classrooms are repopulated. The corporeal ones serve as reminders that the school is still active, if much diminished.

The exhibition also includes a digital installation called “Trophées Oubliées,” a companion to “Imaginary Trip II.” It consists of student documents, degraded by time, that Lubondo found at the school site and scanned. She has added portraits of students, photographed from behind, to animate these vestiges of past lives and remind the viewer that the documents once belonged to real students who had passed through the school. Printed copies of those trophées are available as a takeaways for visitors.

To add another dimension to the exhibition, curators invited photography students from Kinshasa’s Académie des Beaux Arts to share their responses to Lubondo’s work. After meeting with the artist and learning about her creative process, each student selected a photograph from the series and shared their perspectives as a Congolese citizen and young artist. The students’ reflections are printed under the corresponding images.

The exhibition is supported in part by the Fowler Contemporary Council Fund.