From 2007 to 2012, then-UCLA doctoral candidate Laurel Serieys could frequently be found stuck in Los Angeles freeway traffic with a cooler of bobcat blood on the floor of her truck, stressing about reaching her lab before the samples degraded.

It was just one of the challenges fellow researchers had warned her about after she decided to study the effects of household rat poisons on bobcats in the Santa Monica Mountains.

“I was a naive graduate student,” Serieys said. “People told me, ‘It’s too complicated. There are too many steps. You won’t be able to preserve the cells if you’re doing the trapping.’”

The work meant traveling from her home in Topanga to animal traps in the Santa Monica Mountains and then to UCLA — where she isolated and preserved the bobcats’ blood cells — before returning to the mountains to recheck the traps. But Serieys knew that the research could only be done at a place like UCLA, a major university just miles from a mountain range prowled by bobcats, coyotes and mountain lions.

Now, two 2018 studies based on a 20-year collaboration between researchers at UCLA and the National Park Service show in stark detail that rodenticides are greatly altering bobcats’ immune response. The poisons also cause dramatic changes to their gene expression, particularly their skin and immune system, which researchers linked to health problems.

The research expands on previous studies by NPS, UCLA and others, which showed that among carnivores, exposure to rodenticides — from household or agricultural use — is common.

Before Southern California’s devastating November 2018 Woolsey Fire, which consumed more than half of the bobcats’ habitat, one of the biggest threats to bobcats’ lives was rat poison. Most of the bobcats in the study escaped the flames, but the loss of habitat exacerbated the ongoing threat from poison in their food chain. Rat poison remains one of the biggest threats to their lives, said Seth Riley, an associate adjunct professor at UCLA and co-author of both papers.

The findings have important implications for other species, too. Previous studies have shown that rat poison is affecting a wide range of animals across the U.S. — from hawks and coyotes in New York City to bobcats and mountain lions in Los Angeles — as well as foxes, bald eagles, owls and a broad variety of other carnivores here and all over the world. The reason: Those predators eat rodents after the rodents have eaten the poison that people put out to kill them.

One of the papers, published in the Proceedings of the Royal Society B, focuses on the effects of rodenticide on bobcats’ blood cells and immune systems.

“The take-home message is that we observed numerous changes to immune-system function in animals exposed to poisons,” said Serieys, that study’s lead author. “We took samples only from animals that appeared healthy, and this shows that the poison affects even the animals it’s not killing.” 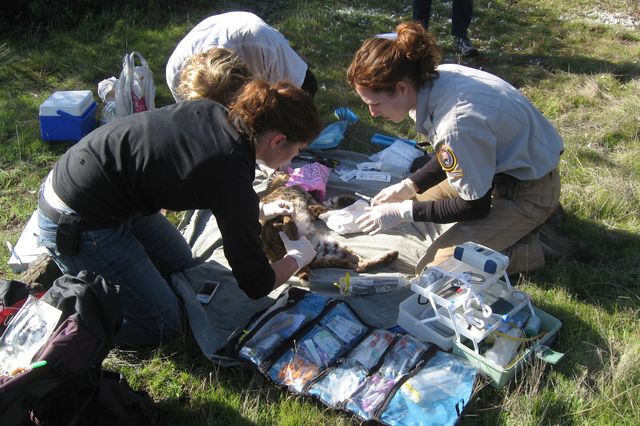 Courtesy of Laurel Serieys
Devaughn Fraser (left) and Laurel Serieys in 2010, taking biological samples before releasing a bobcat back into its habitat.

The other study, which appears in Molecular Ecology, examines which genes turn on or off, or ramp up or down, in bobcats that test positive for poison. Led by former UCLA wildlife biologist Devaughn Fraser and UCLA conservation genomicist Alice Mouton, that research revealed that the rat poison caused changes to nearly 1,800 genes.

Previous research has examined the effects on rats of rodenticides, including anticoagulants, which are used as blood thinners in humans but can be deadly in large doses. But the new work is the first to present a detailed immune profile of bobcats and the first gene-expression study of the effects of rodenticide on any species.

The new studies began when Serieys, now a wildlife biologist and postdoctoral researcher at UC Santa Cruz and the Institute for Communities and Wildlife in Africa at University of Cape Town, joined a research team that in the early 2000s found a link between rat poison and a fatal outbreak of mange in bobcats in Southern California. Their work identified household rat poison as the likely cause of the 2002 outbreak, which killed dozens of bobcats in and around the Santa Monica Mountains and Simi Hills.

Although all of the affected bobcats had the poison in their blood, skeptics questioned whether it was really to blame — mange is not normally fatal, so it was unclear how poison could turn it into a deadly epidemic — and California politicians wanted to know conclusively before they considered limiting or banning the rodenticides. That prompted the researchers to investigate what was happening to the animals at a cellular level.

The two new studies provide clear answers to that question.

“Anticoagulant rat poisons go up the food chain to affect carnivores including coyotes, bobcats, foxes and mountain lions, as well as other predators, such as owls and hawks,” said Riley, who is also wildlife branch chief at Santa Monica Mountains National Recreation Area. “Every species we have looked at has had massive amounts of exposure.”

Anticoagulant rodenticides can cause rats and those larger animals to bleed to death internally. While the poisons are still harmful to cats, bobcats and perhaps felines in general have better survival rates than other animals after the poisons enter their system, said Riley. This seems to be because anticoagulant rodenticide has an interesting effect related to vitamin K, which helps blood clot. In general, rodenticides work by competing with the enzyme that processes vitamin K, which can lead to fatal internal bleeding.

But in the poisoned bobcats, Mouton and Fraser found that the gene responsible for increasing the availability of vitamin K actually kicked into overdrive, which may have helped the animals fight small doses of the anti-coagulant. Still, the research shows the animals are affected by the poison, Riley said.

“Virtually every mountain lion we test has rat poison in its system, and so do 90 percent of the bobcats,” Riley said. “We’ve found three mountain lions that bled to death internally, but our studies show that even animals that don’t die can be harmed. This research pinpoints how the poisons affect cats in previously unknown, sublethal ways, which has important implications for management and conservation.”

Serieys began her genetic research on bobcats in the lab of Robert Wayne, a UCLA professor of ecology and evolutionary biology who collaborates regularly with the park service. She later studied the rodenticides’ effects on the immune system in labs at the UCLA AIDS Institute and the UCLA Jonsson Comprehensive Cancer Center. Analyzing samples from bobcats with and without traceable levels of poison in their systems, she looked at 65 biochemical markers, including immune function and organ function.

Bobcats that had been exposed to rodenticides had fewer neutrophils, the immune cells considered the first line of defense against new diseases. But they also had high levels of B cells, the immune cells that produce antibodies to fight off disease. The latter finding, which at first seemed counterintuitive, was explained by the gene expression research: Even though there were more B cells overall, there were fewer mature ones capable of producing antibodies.

“That could make the bobcats more susceptible to disease, like mange,” Mouton said. 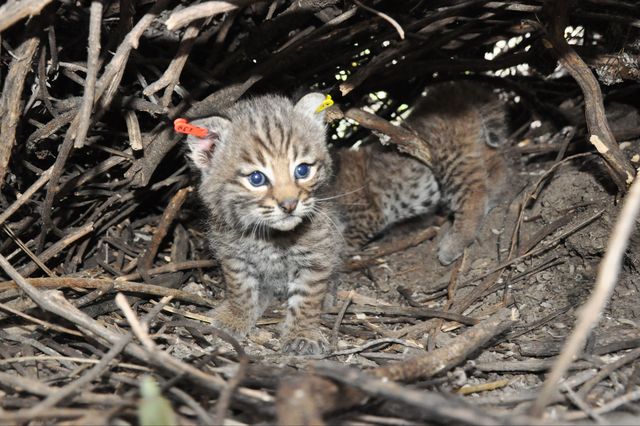 National Park Service
A female bobcat kitten, with ears tagged by researchers, in her den.

The study also revealed that genes related to healthy skin function were significantly less active, which, Mouton said, could put the animals at a higher risk for infection.

“People don’t expect it to have such a big effect when they use rat poison in the garden,” she said. “You think it will just kill a mouse, but maybe then your cat eats the mouse.”

(Determining which biological functions are related to each of those genes wasn’t so simple, though, because the bobcat’s genome has not yet been mapped. So the scientists compared the bobcat genes with those of a related animal whose genes have been thoroughly explained: the domestic cat.)

Riley said the fact that changes are happening within bobcats’ genes underscores the importance of understanding the rodenticides and how they work.

“This is a pervasive, global problem,” he said. “It’s not restricted to areas dominated by humans. It’s in all types of landscapes — urban, rural and even untouched environments. Rodenticides are prevalent in the environment, carnivores are highly exposed, and now we know that these poisons are affecting animals at the cellular level.”