Leprosy hijacks the immune system, turning an important repair mechanism into one that causes potentially irreparable damage to our nerve cells, UCLA researchers have discovered. The new findings, published online today in the journal Cell, suggest that leprosy shares underlying characteristics with some autoimmune diseases. 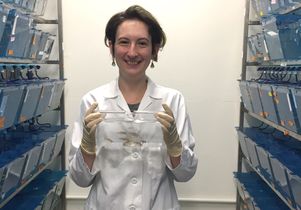 “We discovered that the mechanism of nerve damage in leprosy is very similar to what happens in diseases like multiple sclerosis,” said Cressida Madigan, a postdoctoral research fellow at UCLA and first author of the paper. “That means we might be able to use leprosy to learn more about how inflammation damages the nervous system in these other diseases.”

Leprosy is an infectious disease that affects the skin and peripheral nerves and is caused by the bacteria Mycobacterium leprae and, less commonly, Mycobacterium lepromatosis. According to the World Health Organization, there has been a dramatic decrease in the global disease in the past few decades — from 5.2 million people with leprosy in 1985 to 176,176 at the end of 2015.

Despite the fact that leprosy has been around for thousands of years — there are references to it in the Bible — very little is understood about its biology. This is in part because the bacteria cannot be grown in culture and there are few animal models. M. leprae can grow in the footpads of mice, but don’t actually cause disease in the mice. Armadillos — rarely used in laboratory research — are the only species apart from humans that get nerve damage from M. leprae.

Madigan, along with Dr. Robert Modlin, chief of dermatology and a professor of microbiology, immunology and molecular genetics; Alvaro Sagasti, associate professor of molecular, cell, and developmental biology, both of UCLA; and collaborators at the University of Cambridge in the United Kingdom and the University of Washington, have now used a new animal model, the zebrafish, to study the molecular underpinnings of leprosy.

Scientists have previously shown that the nerve damage in leprosy is caused by a stripping away of the protective insulation, the myelin sheath, that protects nerve fibers, but it was thought that this process occurred because the bacteria got inside Schwann cells, specialized cells that produce myelin.

In the new work, Madigan and her colleagues used zebrafish that had been genetically modified so that their myelin was fluorescent green. Young zebrafish are transparent, so the researchers were able to watch what was happening to the nerve cells. When the researchers injected leprosy-causing bacteria close to the nerve cells of the zebrafish, they observed that the bacteria settled on the nerve, causing doughnut-like “bubbles” of myelin to dissociate from the protective myelin sheath.

When the researchers examined these bubbles more closely, they found that they were caused by M. leprae bacteria accumulating inside of macrophages — literally “big eaters,” immune cells that usually consume and destroy foreign bodies and unwanted material within the body.

“These ‘Pac-Man’-like immune cells swallow the leprosy bacteria, but are not always able to destroy them,” said Dr. Lalita Ramakrishnan, a senior author at the University of Cambridge. “Instead, the macrophages, which should be moving up and down the nerve fiber repairing damage, slow down and settle in place, destroying the myelin sheath.”

The team went on to show that this occurs because a molecule known as PGL-1, which sits on the surface of M. leprae, reprograms macrophages, causing them to overproduce the chemical nitric oxide that, in excess, destroys nerve cells. This same mechanism of nerve damage by macrophages producing nitric oxide may be important in other diseases, Madigan said.

“We’re now working on determining exactly how nitric oxide contributes to nerve damage, as well as how the immune system is triggered to produce nitric oxide in the first place,” she said.

The new results suggest that existing drugs that stop the production of nitric oxide could be useful in preventing nerve damage in leprosy, and possibly other conditions.

The research was funded by the National Institutes of Health, the Wellcome Trust and the A.P. Giannini Foundation.