They’re our modern-day superheroes — charging into burning buildings without hesitation, rescuing those in peril, staving off destruction. But in risking their lives for us, firefighters pay a heavy price, with cancer rates that far outpace the public at large.

Derek Urwin, a longtime firefighter who expects to complete his Ph.D. in chemistry during the winter quarter, is out to change that, using his knowledge of chemistry to improve firefighter health and safety and, ultimately, bring these cancer rates down. It’s a mission that had a very personal origin.

In 2014, Urwin’s brother Isaac, then 33, died of leukemia. Urwin, who was serving with the Los Angeles County Fire Department, took time off to care for him through his chemotherapy treatments.

“When I was sitting by his bedside,” Urwin recalled, “I was thinking, I was a firefighter exposed to all kinds of toxic chemicals in my work, and he wasn’t, and I couldn’t reconcile how he was sick and I wasn’t. Many of my firefighter mentors and colleagues had been diagnosed with cancer, and many had died, in my first 10 years on the job.”

He began thinking deeply about the huge number of chemical carcinogens in the world and how exposure to them can be a major contributing factor to cancer diagnoses. Finding ways to mitigate those exposures, he figured, could save many firefighters’ lives. “That’s why I decided to come back to UCLA and study chemistry,” he said.

Surprisingly, his chemistry courses hadn’t held much interest for Urwin when he was an undergraduate at UCLA in the early 2000s. “I didn’t put in the work back then,” admitted the 41-year-old, who earned his bachelor’s in applied mathematics in 2003 and soon after joined the fire department in Florida’s Miami–Dade County. But with his new motivation to learn, all that changed. He enrolled in chemistry courses through UCLA Extension, earning straight As, and was admitted UCLA’s Ph.D. program, earning his master’s along the way.

“Chemistry isn’t that hard if you work at it,” he said. “It’s all doable. Math too. My dad, who got his Ph.D. in math at UCLA in the 1970s, always said to me, ‘Don’t try studying something that you don’t love.’ I couldn’t stand chemistry as an undergraduate. Then my brother died, and now I can’t put it down.”

Urwin, who in July became director of science and research for the International Association of Fire Fighters, the nation’s largest firefighters’ union, is working to identify harmful chemicals in smoke and charred objects, focusing in particular on cancer-causing compounds known as polycyclic aromatic hydrocarbons, or PAHs, which can be inhaled, absorbed through the skin or ingested. 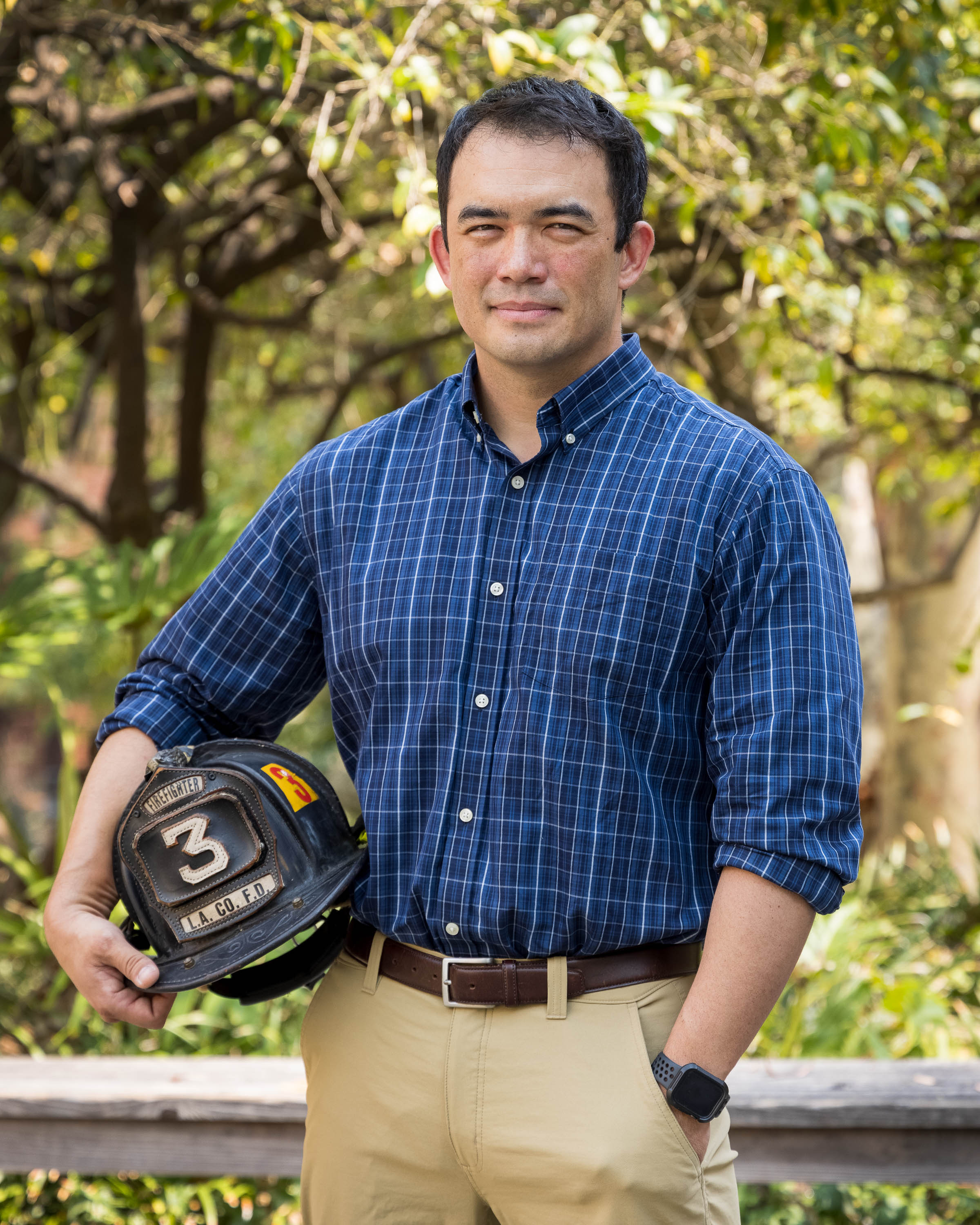 Reed Hutchinson/UCLA
Urwin, shown here at UCLA, has spent nearly two decades as a firefighter, first in Florida’s Miami–Dade County and then in Los Angeles County.

His doctoral thesis focuses on how these compounds can bind to DNA and cause mutations that increase the risk of cancer, and he creates software and designs algorithms to quantify this process. Yet while PAHs represent a huge class of compounds, the Environmental Protection Agency has prioritized only 16 of them as high-risk, Urwin said, and that happened decades ago, even though many others are now known to be even more harmful. What’s more, he said, the International Agency for Research on Cancer, part of the World Health Organization, classifies only one PAH as a known human carcinogen.

This lack of recognition of the danger of exposure to PAHs has harmful implications for firefighters, Urwin emphasized, hampering preventive measures, impeding firefighters from receiving medical coverage for occupational cancers and often preventing their families from receiving justified death benefits.

“After years of public service, many firefighters are left sick and their families are left in financial difficulty as a result,” he said. He hopes his research on carcinogens will begin to rectify this.

Between fighting a variety of fires and inhaling diesel exhaust, firefighters are exposed to a wide range of PAHs and other harmful agents, many of whose health effects are still not well understood.

Urwin is also working with researchers from the University of Arizona, the University of Miami and the National Institute for Occupational Safety and Health on the Fire Fighter Cancer Cohort Study, a project funded by the Federal Emergency Management Agency to study biomarkers of carcinogenic exposure in firefighters. And in concert with firefighters across the county, he is exploring ways to improve personal protective equipment to minimize the amount of hazardous chemicals that seeps in through gaps in firefighting gear.

“Derek is a true scholar, and an exemplary human being, passionate about his mission, incredibly ethical and a strong shoulder for everyone along the way,” said his Ph.D. advisor, chemistry professor Anastassia Alexandrova. “Having served as a firefighter for many years, and being a chemist, he quickly realized that many carcinogens found in smoke are improperly classified or not classified at all.

“There were times when Derek was literally writing his code in the back of a fire truck at night,” she added. “To me, Derek is a hero of our society. I am proud and happy to have been part of his life journey. I think he is on his way to doing absolutely great things for our society.”

Monitoring exposures at the condominium collapse in Florida

When the 12-story Champlain Towers South condominium in Surfside, Florida, collapsed this June, Urwin, realizing that no one was monitoring firefighters’ exposure to chemicals, sprang into action. For 20 days, he led an effort to track and study the PAHs and other carcinogens at the disaster site. He and his research partners from the University of Miami are reporting the results back to firefighters who responded to the collapse and will publish a scientific journal article on this research.

Naresh Kumar/University of Miami
Microscopic images showing air particle samples from the site of the Champlain Towers South collapse (right) and a short distance away, at the University of Miami, Coral Gables.

“A catastrophic building collapse can result in severe exposures to a whole myriad of carcinogenic agents and other hazardous substances, including PAHs, silica and asbestos, depending on when the building was constructed,” he noted.

While Urwin often worked 20 hours a day at the site, he is quick to shift the attention to the active rescuers. “Those rescuers worked nonstop for the better part of a month,” he stressed. “As a firefighter, you have to keep going until the job is done. It doesn’t matter how tired you are. It’s our duty.”

‘Never a bad day’ at UCLA

Fighting fires has at times seemed less stressful than his doctoral work, Urwin joked. “I told my doctoral committee before my oral exams that I was more nervous standing in front of them than standing on the roof of a burning building,” he recalled, before adding: “I passed.”

UCLA holds a special place in his heart, Urwin said. After all, it’s where he met his wife, Erin, when they were both undergraduates in a comparative literature course. He saw she was carrying a math book and struck up a conversation. Now he and Erin, who earned a doctorate in math from UC Irvine, have been married for 13 years and have two children, ages 7 and 5.

And his experience studying chemistry has been immensely rewarding, said Urwin, who praised his advisor, Alexandrova, as a “remarkable mentor who teaches students how to learn.”

“UCLA’s been great, so welcoming and has offered so many opportunities. I’ve never had a bad day as a firefighter. I’ve had a bunch of long days, but never a bad day. It’s been the same at UCLA,” he said. “I’m always a Bruin.”