When we think of classical theater most of us are likely to call up images and ubiquitous lines from Shakespeare.

But he was not the only visionary playwright of the Renaissance — far from it.

Since 2014, Barbara Fuchs, UCLA professor of English and Spanish, has been collaborating across campus and with the Los Angeles theater community to highlight the golden age of Spanish theater through a program called Diversifying the Classics.

Every year graduate students from the humanities in the UCLA College and the UCLA School of Theater, Film and Television thoughtfully collaborate to translate and perform works by Spanish playwrights.

Those efforts have brought forth LA Escena, Los Angeles’ first Hispanic classical theater festival. Performances will be held Sept. 21-23 at the Greenway Court Theatre, which is 6.5 miles from UCLA near Fairfax and Melrose avenues.

Mexican theater company EFE Tres will perform Lope de Vega’s “El príncipe inocente (The Innocent Prince),” a meditation on political power and culpability reimagined as a dialogue in a prison cell, and “El Merolico (The Mountebank),” a reworking of Cervantes’ comic interludes as delivered by a traveling performer in small-town Mexico (both will performed in Spanish, with English supertitles).

Sylvia Blush and Jean Carlo Yunen Arostegui will direct “Women and Servants,” Lope de Vega’s exploration of class, loyalty and desire in Madrid. The play, only recently rediscovered after 400 years, has been translated into English by Fuchs.

“Though we love Shakespeare, we want to remind audiences that the classics come in different flavors, beyond the Anglo tradition,” Fuchs said. “We’ve been working on translations and adaptations for four years, and the festival is an important milestone in bringing the work to L.A. audiences. We’d like to make the festival a permanent, regular offering, so that L.A. can become a center for diverse classical programming that recognizes the Hispanic tradition.” 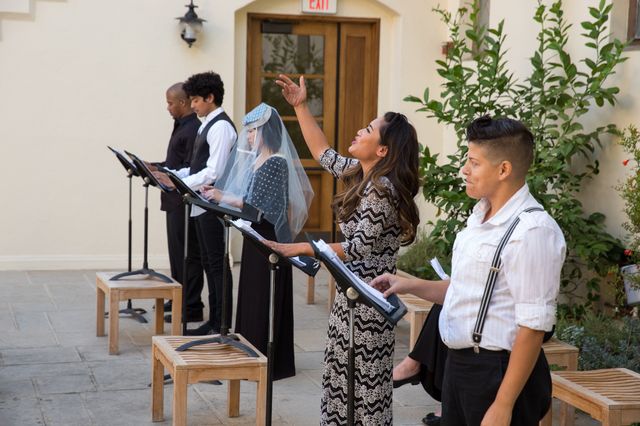 Working with theater practitioners on translated texts is invigorating, said Laura Muñoz, a doctoral candidate in Spanish who has been part of UCLA’s translation group from its inception.

“It is so immensely satisfying to work with playwrights and actors and watch a staged reading of something you’ve worked on in a room with 10 people over the course of three to six months,” Muñoz said.

The process of translating theater texts is all about a search for meaning and articulating that meaning, a process that is relevant to academic life and participation in culture at large, Muñoz said.

“People in the humanities are constantly being asked to justify the importance of the work that they do,” she said. “Thinking about what things mean, how we make meaning out of our experiences, is a valuable and critical skill. A lot of these plays deal with love, families, and your position in society, how you move through the world as a woman in the 17th century, which is not that different than things people face today.”

The selected plays are witty, fresh and irreverent — and deserve to be more widely known, Fuchs said.

EFE Tres, based in Mexico City, is known for its hip, modern takes on classical theater. Fuchs considers them perfect ambassadors for the comedia, the Spanish theater tradition of blending comedy and drama into three-act plays.

Exploring diverse classics makes for a more nuanced understanding of the past, Fuchs believes, with one key example being the central role of actresses on the comedia stage. Unlike in Shakespeare’s England, women were allowed to perform on stage in Spain.

“It’s not just that women get to act: The playwrights then write magnificent roles for them,” Fuchs said. “The women of ‘Women and Servants,’ the sisters Luciana and Violante, have remarkable control over their love lives as they insist on their own choices in men. They run circles around their father, and are arguably the wittiest and most resourceful characters in the play.”

Another major component of this tradition is how characters in the plays find a way to work around restrictive expectations of a conservative society, a theme that resonates with our modern society, Fuchs said.

Also part of the festival are UCLA undergraduates who studied comedia with UCLA professor Javier Patiño (also a member of the translation group), who developed a skit about going to the theater in 17th-century Spain. They will perform it as a warm-up act before the first night of the festival, much like the short pieces that would have launched an afternoon at the theater when the comedia first played.

“Beyond discovering a whole new corpus together, I value our collaborative work, and our efforts to reach outside the university to build communities around the arts,” Fuchs said. “I want students to think about the importance of the arts, and the public humanities, in whatever position they take after UCLA.”

Tickets for LA Escena are on sale now and are $10 per performance.