Yet many species have developed physical changes over millions of years that protect them from these conditions, begging the question: What if the key to preventing these and other disorders lies untapped in the animal king— er, queendom?

That’s the crux of a new UCLA paper published in PNAS Nexus that summarizes years of research measuring females’ risk for common diseases across different species.

The authors — a physician, an evolutionary biologist and a veterinarian — teamed up to review autopsies and clinical studies of thousands of our evolutionary ancestors. They systematically surveyed fish, birds, reptiles and mammals to build models of shared vulnerability and resistance to female medical conditions.

“Numerous female animals have evolved over hundreds of millions of years to resist diseases that claim the lives of millions of women a year,” said lead researcher Dr. Barbara Natterson-Horowitz, a professor of cardiology at the David Geffen School of Medicine at UCLA and co-author of the New York Times bestseller “Zoobiquity.” “Unraveling the biology behind these changes could lead to lifesaving interventions in women’s health.”

Many of the ancient genes and molecular pathways associated with some species’ female resistance to common diseases remain present in humans today, she noted.

Natterson-Horowitz and her co-authors — UC Santa Barbara associate professor of anthropology Amy Boddy and Dawn Zimmerman,  director of international programs for the Veterinary Initiative for Endangered Wildlife — offer abundant examples of animal adaptations that could inspire new strategies for protecting women’s health, including:

Pressing pause on pregnancy. The researchers discovered that the genomes of 130 mammalian species, including bears and fruit bats, enable pregnant females to temporarily halt the development of their embryos until timing is optimal. The phenomenon is called embryonic diapause.

“Conception may not happen at the best time for a pregnancy,” said Natterson-Horowitz, who also teaches human evolutionary biology at Harvard University. “Embryonic diapause offers pregnant females the flexibility to control the timing of their offspring’s birth when faced with inadequate food or too many predators in the environment.”

Identifying the mechanism behind this reproductive strategy could lead to new methods for preserving the embryos of women undergoing in-vitro fertilization or could simply enhance a woman’s control over when she gives birth.

“Some human reproductive pathways resemble these species’ closely enough that further research might one day help infertility experts mimic these approaches for their patients,” Natterson-Horowitz said.

Giving birth at an older age. A woman’s ability to conceive and deliver healthy babies diminishes after the age of 40. However, the Greenland shark remains able to become pregnant and deliver healthy offspring well past 250. Understanding this phenomenon could spur new ways to counter declining fertility in women who have undergone chemotherapy or faced difficulty conceiving, especially later in life.

Maintaining strong bones in menopause. Prolonged inactivity and menopause can lead to bone fractures and osteoporosis. But hibernating animals, including some species of bears, marmots and squirrels, sleep the winter away without losing bone mass. Similarly, weak bones can result from infrequent ovulation. Yet pandas ovulate only once a year and maintain strong bones. Pinpointing the biology that makes this possible could help prevent osteoporosis in sedentary or postmenopausal women. 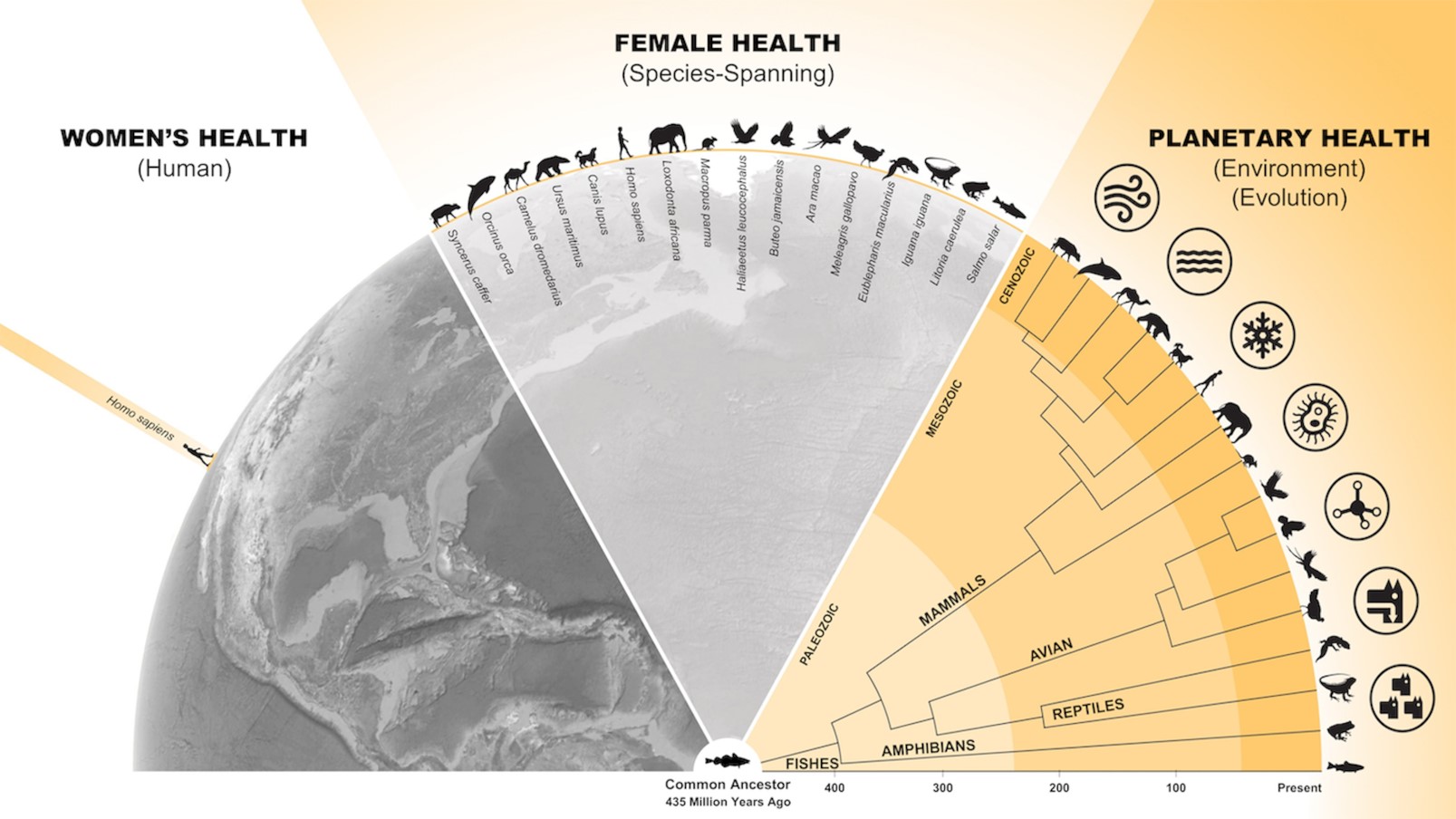 Barbara Natterson-Horowitz and Oliver Uberti
Moving beyond human-centered and male-centered traditions in medicine would strengthen physicians’ understanding of the causes of disease and guide the development of new strategies for prevention and treatment.

Preserving biodiversity by combatting climate change and other threats is crucial for protecting animals and the evolutionary adaptations that may hold the key to preventing and treating human disease, the researchers say. This is particularly true for women’s health, which historically has been underfunded and built on scientific findings from male patients.

“Human exceptionalism has made it difficult for physicians to recognize the natural world as a source of solutions,” said Natterson-Horowitz. “Adding veterinary science and evolutionary perspectives to medical school curricula would help overcome human bias.

“And we physicians could do a better job protecting the women entrusted to our care by paying closer attention to the health of other female animals and the planet we share,” she concluded.

The study was partly funded by the National Institutes of Health.