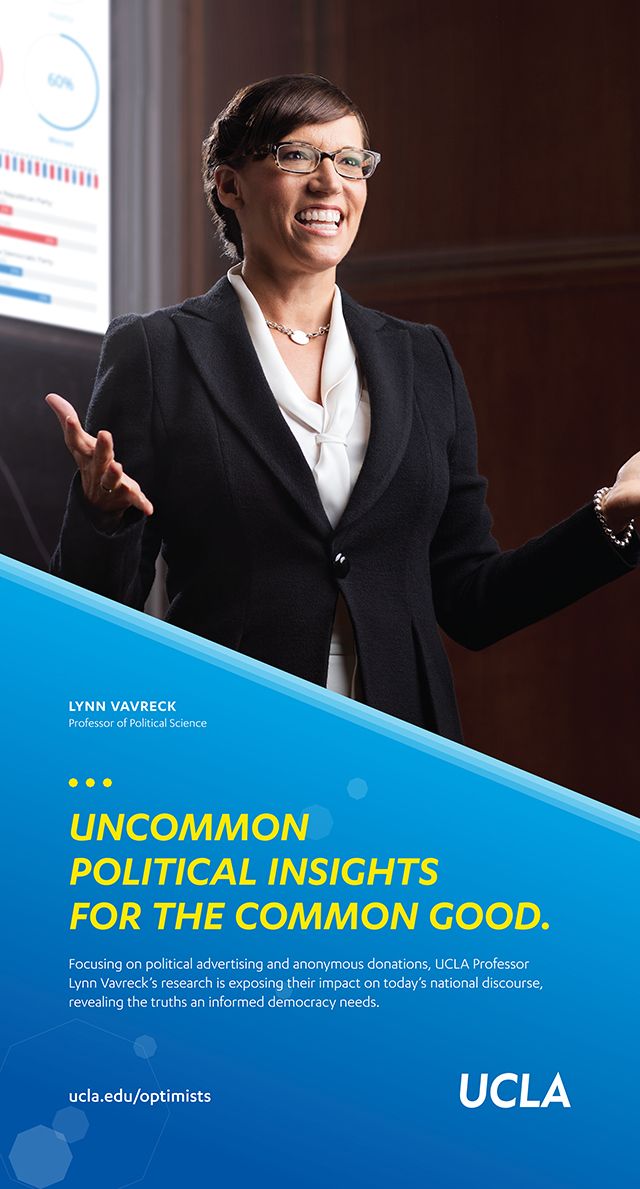 The inventor of a process that turns pollution into concrete. A political scientist with uncommon political insights. The tech executive who made smartphones more intelligent. And the sociologist whose research linking box office receipts and TV ratings to Hollywood’s diversity dilemma has flipped the script on what succeeds in show business.

These are just some of the alumni and faculty featured in UCLA’s fall 2016 Optimists campaign.

The effort, which launched this month and runs through the end of the year, includes digital, print, outdoor, radio and TV. It continues last year’s campaign themes of transformation and progress while exploring new stories that demonstrate the influence of optimism, the unique can-do attitude of UCLA faculty, students and alumni that has led to breakthrough after breakthrough for almost 100 years.

Every ad in the campaign invites the audience to visit the Optimists website.

“UCLA faculty and alumni are engines of positive change around the world, in an infinite number of ways, from groundbreaking innovations addressing illness and climate change to creating change through research on critical social and political issues,” said Kathryn Kranhold, UCLA’s associate vice chancellor for university communications and marketing.

“With our newest Optimists campaign, we build on the past and look to the future, featuring UCLA innovators who are developing breakthrough therapies and driving change through public policy, underscoring UCLA’s impact on Los Angeles, the nation and the world.”

The 2016 ads highlight a new crop of UCLA faculty and alumni all-stars, beginning with:

Others to be featured during the campaign will be: