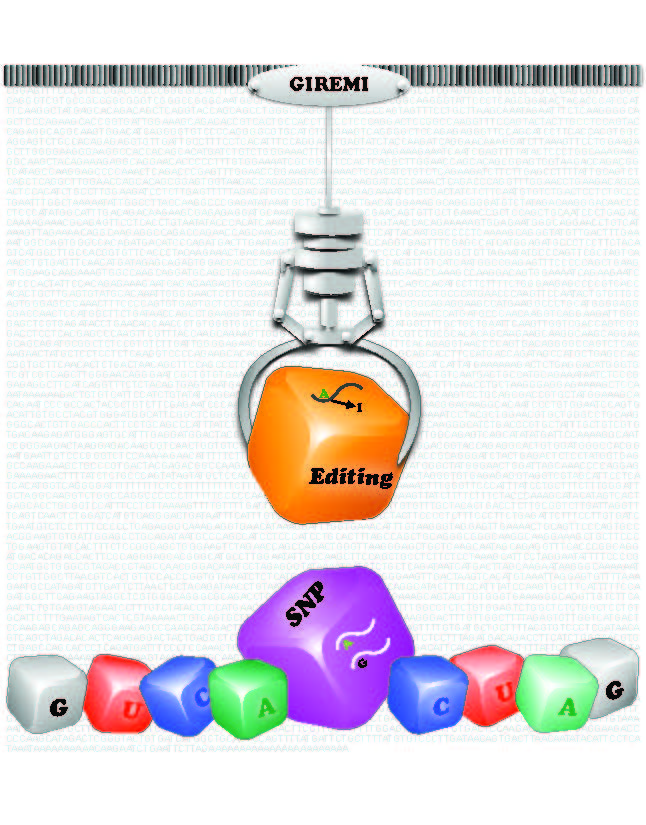 Jae Hoon Bahn/UCLA Life Sciences
In this illustration of GIREMI each block represents an RNA nucleotide.

UCLA life scientists have created an accurate new method to identify genetic markers for many diseases — a significant step toward a new era of personalized medicine, tailored to each person’s DNA and RNA.

The powerful method, called GIREMI (pronounced Gir-REMY), will help scientists to inexpensively identify RNA editing sites, genetic mutations and single nucleotide polymorphisms — tiny variations in a genetic sequence — and can be used to diagnose and predict the risk of a wide range of diseases from cancers to schizophrenia, said Xinshu (Grace) Xiao, senior author of the research and a UCLA associate professor of integrative biology and physiology in the UCLA College.

Details about GIREMI were published March 2 in the advance online edition of the journal Nature Methods. The research was funded by the National Institute of Health and the National Science Foundation.

Xiao is making the software available on her website as a free download, enabling scientists worldwide to use this potent method in their own research on any number of diseases. President Obama’s budget encourages doctors to design individually tailored treatments based on genetic and molecular differences. This approach, which is called personalized medicine or precision medicine, holds the potential of “delivering the right treatment at the right time, every time, to the right person,” Obama said.

Genes contain RNA editing sites, which are not yet well understood, but appear to hold clues to many diseases. One might think that whatever is in the DNA we inherited from our parents would eventually be expressed in our proteins, but it turns out there is a modification process, called RNA editing, that can contribute to different types of cancer, autism, Alzheimer’s disease, Parkinson’s and many others, Xiao said.

RNA editing modifies nucleotides, whose patterns carry the data required for constructing proteins, which provide the components of cells and tissues — in our genetic material. If you had an “A” nucleotide in your DNA, for example, it may be modified into a “G.”

RNA editing is different from mutations. A mutation is written incorrectly in our genes. In RNA editing, our genetic material is normal, but modifications occur later when a gene is expressed.

GIREMI was researched and designed during the past two years by Xiao and Qing Zhang, a postdoctoral scholar in her laboratory. It is the most accurate and sensitive method for identifying RNA editing sites, as well as SNPs and mutations in RNA. Differentiating SNPs, most of which appear not to be harmful, from RNA editing sites has been very difficult and previously required sequencing a person’s entire genome.

“We can predict RNA editing sites and SNPs without sequencing the whole genome,” said Xiao, a member of UCLA’s Institute for Quantitative and Computational Biosciences, Molecular Biology Institute and also the Jonsson Comprehensive Cancer Center. “Now you don’t have to spend thousands of dollars sequencing the DNA; you can sequence only the RNA. Our method will be easily applicable to all the existing RNA data sets, and will help to identify SNPs and mutations at a large cost reduction from current methods.”

RNA editing is at an early stage. “We are trying to discover as many editing sites as possible,” said Xiao, whose research group is working to apply GIREMI to many diseases. “This method can be easily applied to any RNA sequencing data sets to discover new RNA editing sites that are specific to a certain disease.”

People have “abundant differences” in RNA editing sites. Studying 93 people whose RNA has been sequenced, Xiao and Zhang found that each person has unique RNA editing sites in their immune system’s lymphoblast cells, which are precursors of white blood cells that protect us from infectious diseases and foreign invaders.

RNA has been widely known as a cellular messenger that makes proteins and carries out DNA’s instructions to other parts of the cell, but is now understood to perform sophisticated chemical reactions and is believed to perform an extraordinary number of other functions, at least some of which are unknown.