"Don't use the word 'prostitute.'"

That’s the advice Carissa Phelps gave a UCLA journalist before he wrote a single word of her story. A graduate of the UCLA Anderson School and the UCLA School of Law, she's referring to the thousands of girls and boys in the U.S. — victims of human trafficking — whom adults have forced into the sex trades through systematic rapes and abuse.

For Phelps, it's an important, sometimes misunderstood, distinction that's intensely personal and essential for her current work as an advocate for former runaways and survivors of sexual exploitation — individuals like her.

It’s a sad journey that she will undoubtedly describe as a featured speaker at “Examining the Roots of Human Trafficking and Exploitation,” a law review symposium set to take place Thursday and Friday at the UCLA School of Law. Giving the keynote address will be California Attorney General Kamala Harris. Also participating will be more than 45 speakers in the fields of law, medicine, social work, sociology and public health.

Phelps did not publicly discuss her own saga until she was a graduate student at UCLA. Since then, she's been the subject of an award-winning documentary, “Carissa,” which is scheduled to screen Thursday at the symposium. A Q&A with her will follow.

She’s also written a memoir, “Runaway Girl: Escaping Life on the Streets, One Helping Hand at a Time.” It's the kind of story one wishes were fiction, because it's painful to know that Phelps' harrowing story is true.

Phelps was a runaway by age 12, escaping a troubled and dangerous home life. She fell under the control of a pimp and began a life of forced sex and drug use, ending up arrested multiple times by age 14. That did it. She began taking steps to rise above the streets.

Phelps turned tragedy into triumph as she rose from runaway to holder of an M.B.A. and a law degree from UCLA. 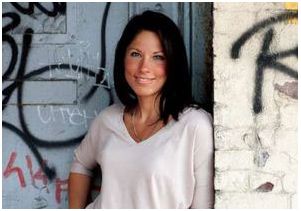 Encouraged by a youth counselor at juvenile hall and a math teacher, she returned to school after a three-year absence, eventually graduating from high school and Fresno State University, where she earned a B.A. in mathematics with honors. Then she became a high school math teacher and ultimately made her way to UCLA. There she began to tell her story.

"When I was at UCLA Anderson, I planned to go into private equity," Phelps said. "I wanted to start a fund through local investing that would focus on costly social questions. But I stepped away, went back to Fresno, wrote the book and formed Runaway Girl in early 2012."

Runaway Girl, a California FPC, or for-profit entity with a "special" or social purpose, creates employment opportunities for former runaways and survivors of human trafficking. The company hires survivors to work as trainers, consultants and advisors with local and community-based organizations that help victims of human trafficking. Trainers also work with legal, medical and law enforcement groups to teach them to see the girls and boys they meet as victims, not as prostitutes committing a crime. "We get them to treat survivors as experts instead of criminals," Phelps said.

According to the Polaris Project, a nonprofit, nongovernmental organization, there were 27 million people in modern-day slavery in 2007. Phelps believes the numbers are higher because many victims don't come forward out of shame.

"Anyone can be trafficked, from skilled workers to college students from stable, loving families," Phelps said. "Basically, it is a buyers' market, and whatever buyers demand is what will be sold. Putting a price on a person's heart and mind is bad, but what's worse is some of the physical and mental control tactics that traffickers use."

Through Runaway Girl, Phelps restores some control to the victims. The company currently has 24 trainers and experts-in-training, including Rachel Thomas, a survivor who graduated from UCLA with a master’s degree in education in 2008.

Although Phelps' organization is predominantly California-based, Runaway Girl collaborates with trainers and organizations across the country, including in Oregon, Georgia, Virginia and Kentucky.

Phelps' passion for her work becomes palpable when she is discussing the success of those she supports. "Some of our trainers get hired by our partners," she said, adding that three of them were hired without high school diplomas because they were considered experts.

"Most of us are uncomfortable with impossibly cheap labor and young children as sex symbols, but being uncomfortable is not enough," Phelps said. "What we buy, what we watch and what we talk about is up to us. We decide when doing nothing is no longer an option. We decide when to act, and, of course, I believe the time is now."

In addition to Thursday’s screening, Phelps will be a special guest at a reception hosted by the UCLA Alumni and UCLA Law Alumni associations Thursday evening. On Friday, she will participate in two panel discussions. Details on the upcoming law school symposium are available here.

This was adapted from a UCLA Magazine story.