Multidisciplinary Arab American artist Saj Issa often finds herself at the crossroads of identity. Born and raised in St. Louis, Issa has only ever lived at the intersection of two contrasting cultures, inspiring her to merge them into one of her own.

Issa, who is a master’s of fine arts candidate at the UCLA School of the Arts and Architecture, grew up in the diaspora alongside a community of Palestinians descending from the same region. Issa and her peers spoke a fusion they call “Arab-ish” — slang that combines their distinct dialect of Arabic spoken by agriculturists and English. As an adult, she is adamant about pushing boundaries and visualizing the intricacies of cultural traditions and social issues through her art.

“My art is a representation of my personal experiences of displacement identity and social issues,” said Issa, who often uses Western commercial logos in her art, conflating with Eastern architectural designs and motifs.

Having spent her childhood summers in Palestine, Issa has a complex personal history to draw from when she comments on religion, politics and the parallels of East and West through her art.

Issa discussed the process behind some of her newest pieces, some of which will be on display at her first solo exhibition “I Was Out Partying While You Were Home Making Prayers” at Le Maximum Los Angeles, May 14 through June 19. 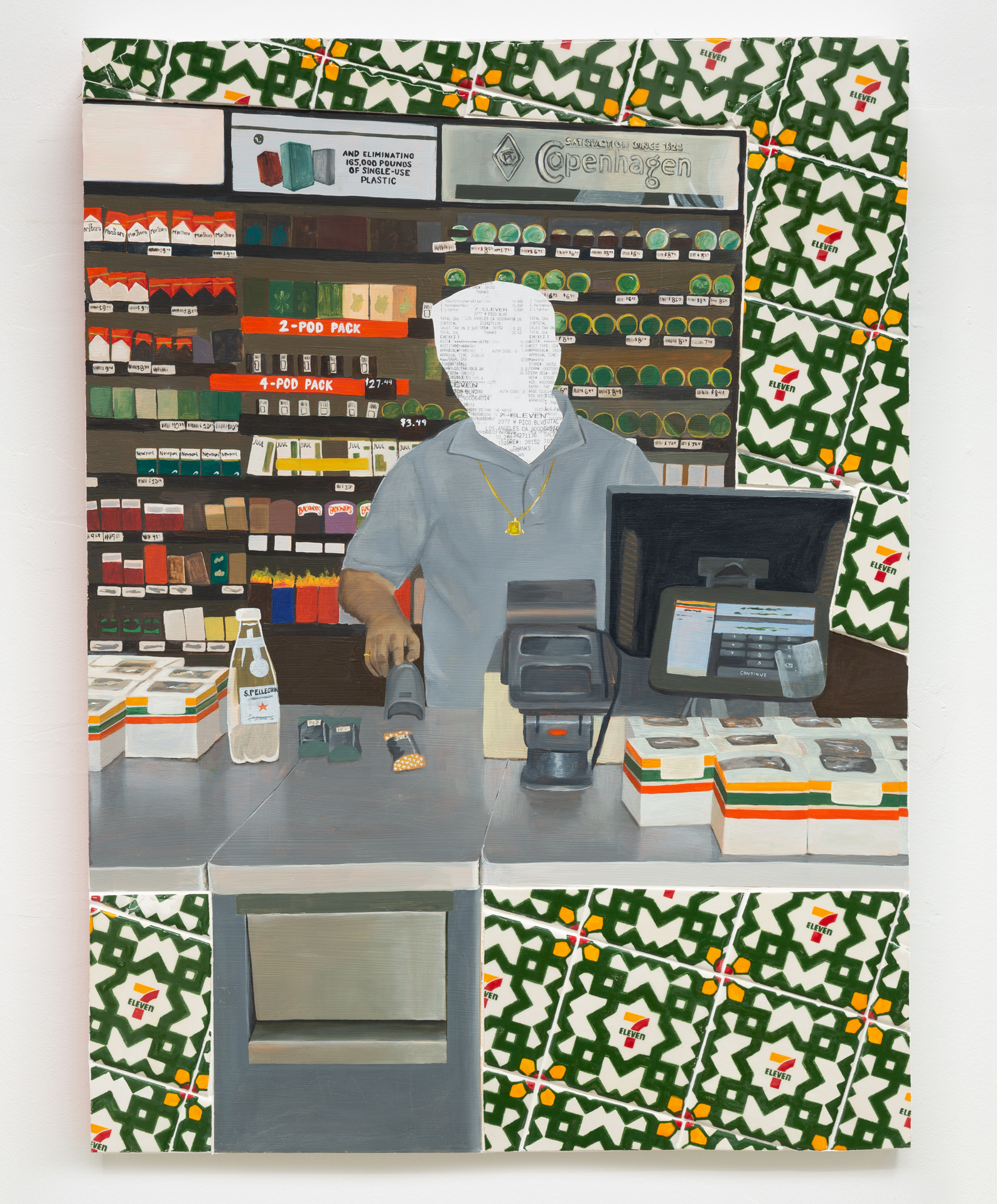 Since the start of Issa’s M.F.A. program at UCLA, she’s been taking Middle Eastern and North African architectural iconography from mosques and combining corporate logos into the pattern.

Issa: The convenience store series I’ve been working on is a proposition to challenge the viewer’s relationship to consumerism and the figure behind the counter. Like many Middle Eastern immigrants in America, my father, and many other male figures in my family, worked at convenience stores.

I wanted to make these lack-of-portraiture portraits an allusion to the way Islamic art portrays figuration, which is usually the obliteration of identity. So I pasted the receipt of the transaction I had made at the store that day on to the photograph I took of the clerk behind the counter as documentation of the exchange and the reality of flattening a clerk’s identity to a transaction.

The 7-Eleven tiles are actual ceramic tiles laid onto the wood panel. Those I handpainted and cut at an angle to fit in the composition, which is 32 x 24 x 2.25 inches. 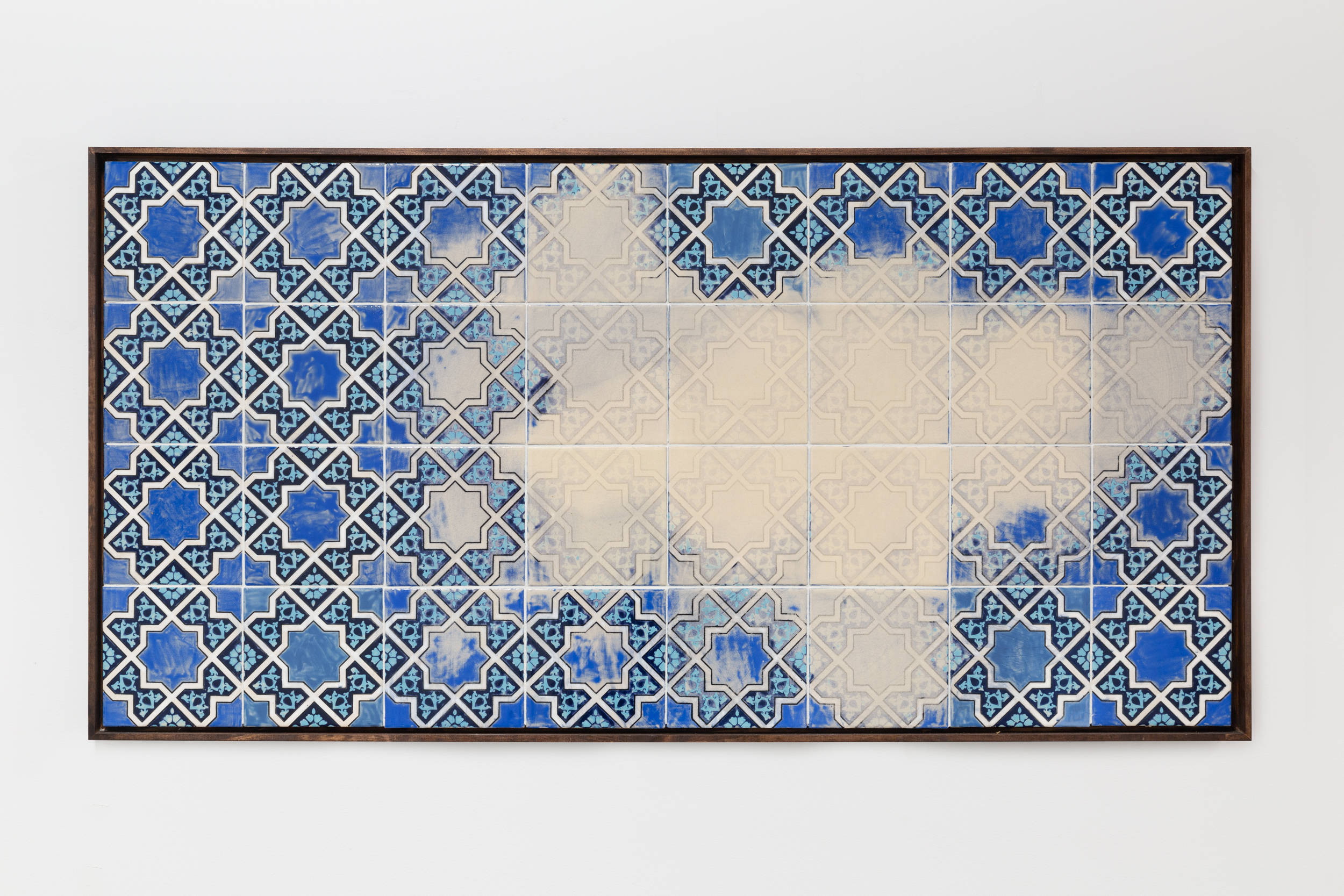 Thirty-two handpainted ceramic tiles were mounted on Issa’s wall and distressed with a sponge that took off the glaze to create a “scrubbed off” appearance.

Issa: I wanted to visually reveal the gesture of cleaning and washing. “Ablution,” in terms of what that means in Islamic practice, is the process of physically cleansing one’s self to metaphorically cleanse one’s sins and bodily actions.

I also wanted to demonstrate the frustrations and endurance that one builds when engaging in labor and/or prayer and worship. Both labor, prayer and worship require repetition and perseverance, and so this piece considers how the concept of frustration is present in both actions.

What you’re seeing if you zoom in closer is the color of the glaze staining the clay body of the tiles. It looks like it’s been whitewashed or bleached, but in fact it’s the underglaze that has stained the clay body, unable to be fully scrubbed off. 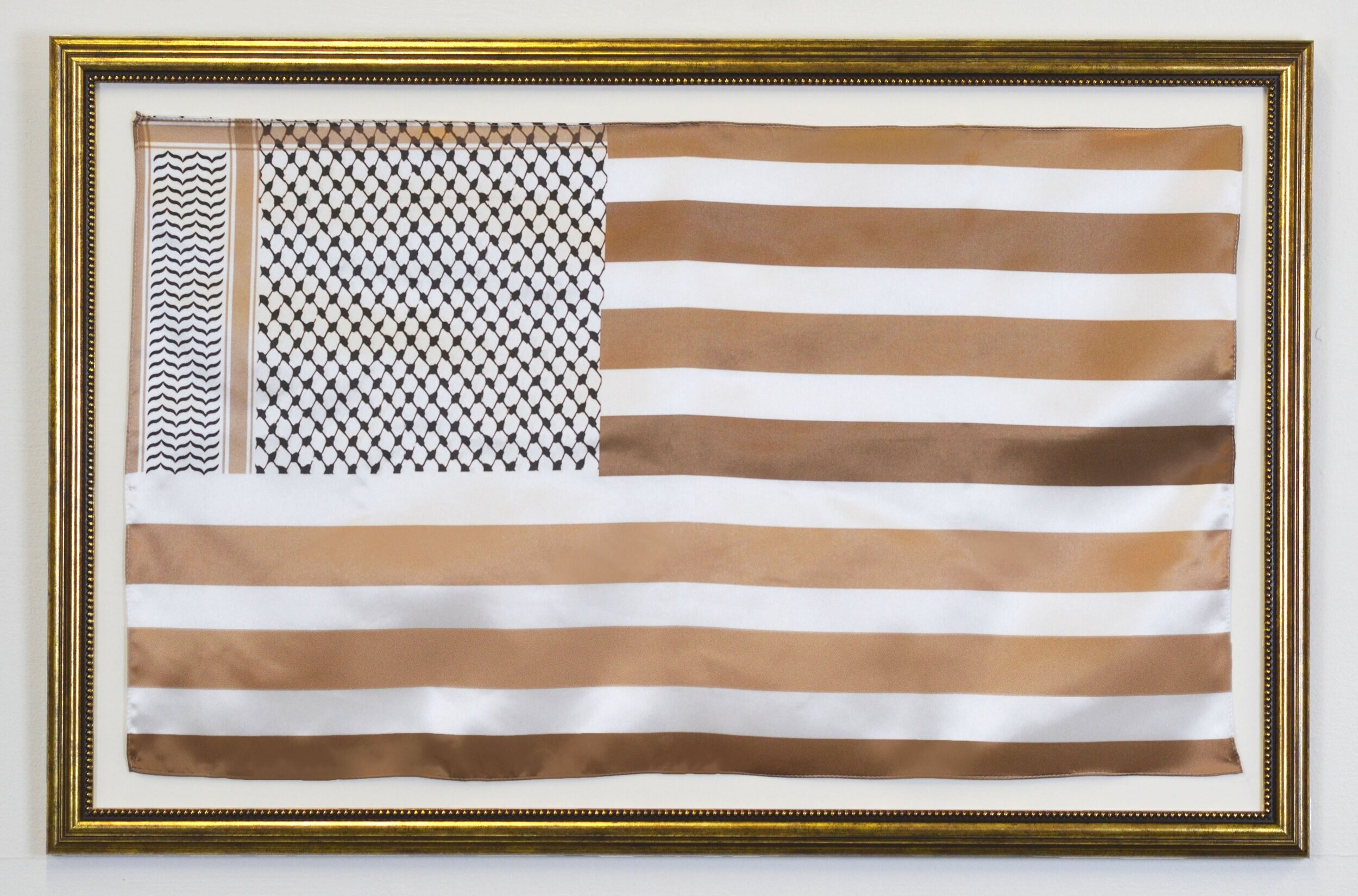 The title “Noman’s Land” alludes to the word “nomad” and plays on the phrase “no man’s land.” Issa said she wanted to convey the feeling of an outsider traveling around America experiencing the marginalized effect of existing in this country.

Issa: In “Noman’s Land” I’m following various contemporary artists who have remade their own versions of the American flag. I think that it’s a poetic gesture or practice to do for artists in America — to remake the American flag in a way that represents their identity and how they see themselves in this country.

I turned the stripes of the flag into various shades of Arab skin tones, then I replaced the stars with the keffiyah pattern, which is a traditional scarf that used to be worn by farmers in Palestine. It’s a pattern that’s often misappropriated as a symbol of terrorism in the Western media.

I just wanted to see what that looked like, portraying those two things side-by-side. It felt very fitting to me. It also seemed like a symbol of liberation, perseverance and integration.