Among the amazing treasures contained in the thousands of records in UCLA Library’s Special Collections, are the papers of UCLA alumnus Ralph J. Bunche, the only Bruin to ever be honored with the Nobel Peace Prize. The Bunche papers span World War II, the creation of the United Nations and the civil rights movement.

The man for whom UCLA’s African American studies center is named was awarded the Nobel Peace Prize in 1950 for achieving an armistice between Israel and the Arab states. Throughout his life, Bunche, who marched with Martin Luther King Jr. in Alabama championed racial equality and civil rights in the United States and beyond.

“Throughout his career, first as an educator and then in various roles in the United Nations, Bunche demonstrated his dedication to promoting human rights,” said Lizeth Ramírez, the UCLA Library Special Collections librarian and archivist for Los Angeles communities and cultures. “He wrote telegrams to Dr. Martin Luther King Jr. detailing his admiration and support and participated in various civil rights marches, including the Selma-to-Montgomery march in 1965. Like Dr. King, Bunche dedicated his life to the service of others, both in the United States and internationally. An archival collection celebrating the life and work of Ralph J. Bunche would find a home anywhere, but as a UCLA alumnus, his papers are an important Bruin legacy.”

During this week, in which the nation honors King’s legacy and we individually reflect on how we continue the challenging work of advancing true equality, we share these excerpts, from Bunche’s thoughts on King’s assassination and from three telegrams and letters Bunche wrote to support and congratulate King during his lifetime.

All of these are accessible on the UCLA Digital Library Program’s website.

Personal statement on the assassination of Martin Luther King Jr.

“It occurs to me that if the sentiment behind this massive mourning for Dr. King could be quietly converted into community and national resolve to launch a decisive attack upon racism in this country in all of its aspects, and particularly in its ghetto manifestations, the back of the American racial problem could be broken. It has not been heretofore because all approaches to the problem have been characteristically timed, superficial, pecking, palliative and band-aid in nature, never going to the roots. And never with any determination and will, or conviction that the problem could actually be licked, which alone could provide the necessary thrust.” 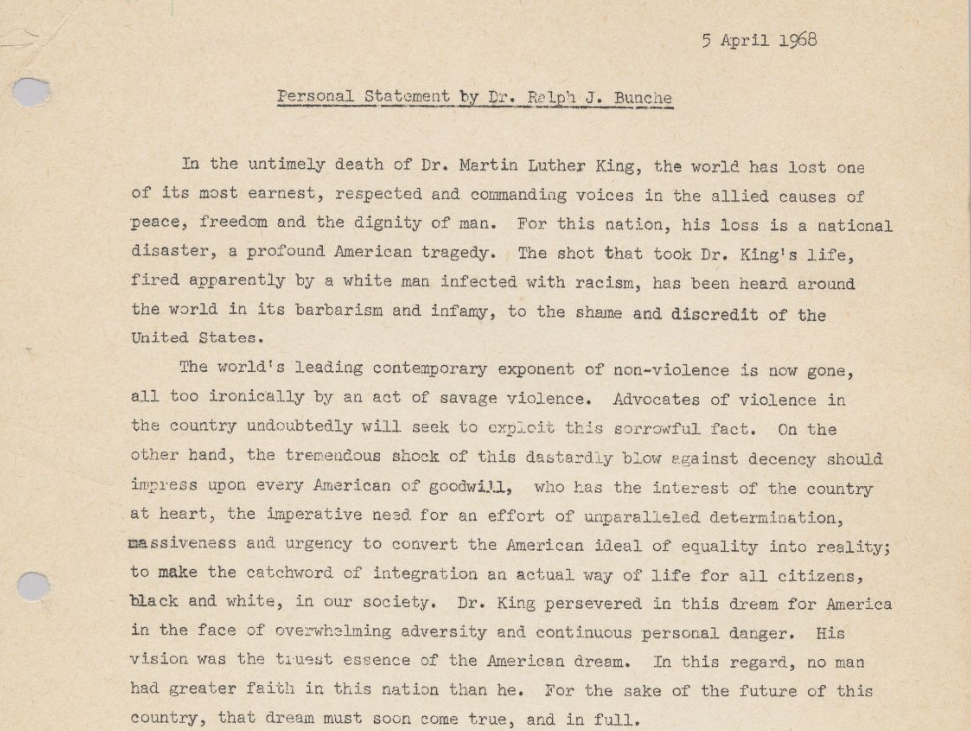 “Your patient determination, your wisdom and quiet courage are constituting an inspiring chapter in the history of human dignity. You have steadfastly refused to barter away your dignity and may God bless you for that,” Bunche wrote.

He continued: “I greatly admire and warmly congratulate you all. I know that you will continue strong in spirit and that you will stand firm and united in the face of threats and resorts to police-state methods of intimidation. Right is on your side and all the world know[s] it.”

“There is an effective and inspiring answer to current acts of violence and defiance of law. It is found in the new courage, the deepened sense of dignity, the reinforced resolve of all Negroes to be treated as men and women; as American citizens in full; as equals, under God and Law in rights and opportunities with all other men; and, without rancor, to sacrifice, strive and struggle persistently to that end. It is found in the leadership of selfless courage and application, of integrity and fearlessness, which you and many other clergymen, as well as lay leaders, are giving to a new Negro in the South who cannot be intimidated, who cannot be diverted from his determination to achieve his American heritage in its entirety.”

“But I know you will agree that we all owe greatest gratitude to the Negro citizens of Birmingham for their heroic determination and their remarkable self-discipline in the face of brutal provocation deliberately created by that hate-monger, Eugene ‘Bull’ Connor, with his dogs, firehose, assaults on women, arrests of children, and gratuitous insults to all negro Americans.”