Steven Nelson recently joined a long line of respected Africanists who have led the African Studies Center at the UCLA International Institute. And as its new director, he is working to cultivate a sense of community among faculty and students on campus with an interest in Africa.

“I'd like to see a center that works for the UCLA community and also continues its excellence outside in the world,” says Nelson, as well as one that facilitates faculty and student research about the continent.

Founded in 1959 by UCLA political scientist James S. Coleman, the African Studies Center has long been well-known in Africa. Its most recent project on the continent — a gender education program in Rwanda — is now successfully transitioning to a second stage in which the center will now play a smaller role. 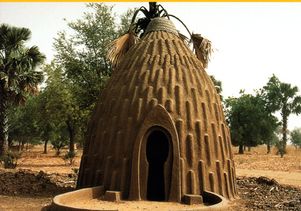 Courtesy of Steven Nelson
The beehive-domed house constructed by the Mousgoum people of Chad and Cameroon was the subject of a 2007 architectural history book written by Nelson: "From Cameroon to Paris: Mousgoum Architecture in and out of Africa."

A specialist in African and African-American art and architectural history, Nelson realizes that some misconceptions about Africa are still circulating. On his list of enduring misconceptions about the continent? “That it’s all the same country; that everyone is poor and starving; that all governments are corrupt; that all African cultures are all small-scale, communal and basically not us — a very primitivist vision of the continent.”

Shredding those images, Nelson paints a truer picture: “Africa is really urban and always has been. There are several cities in Africa that are bigger than most U.S. cities; I can think of two or three that are bigger than New York,” he says. Today, many of the fastest-growing economies in the world are in Africa. Its infrastructure is changing rapidly, with mobile phones having transformed everyday life. And China is pouring money into development investments there.

“In general,” he observes, “Africa is globalizing at the same pace as everyone else.”

Although he is an art and architectural historian, Nelson’s interests cover a wide-ranging territory. He has published on topics in contemporary and historic arts, the architecture and urbanism of Africa and its diasporas, African-American art history and queer studies. His multidisciplinary research interests have won him a number of grants and fellowships from the Getty Research Institute, the Andrew W. Mellon Foundation, Radcliffe and the W.E.B. Dubois Research Institute at Harvard University, among others.

As an undergraduate, Nelson studied studio art and worked as a graphic artist at newspapers for six years before deciding to do a Ph.D. in art history. He arrived at Harvard thinking that he would specialize in modern art, but his involvement in a search committee for an African art specialist changed his path. The faculty member who was hired at Harvard, Suzanne Preston Blier, eventually became his doctoral adviser and remains a cherished colleague.

Nelson went on to teach at Tufts University and Wellesley College before joining UCLA’s art history department in 2000. He has published widely on topics in contemporary and historic arts, the architecture and urbanism of Africa and its diasporas, African American art history and queer studies.

His current projects cut across disciplinary lines: He’s working on a “travelogue” about the Underground Railroad; a history of the city of Dakar, Sénégal; and an examination of the work of several African and African-American artists who define art and identity in geographic terms.

The book on the Underground Railroad is part of a series of travelogues written by academics and published by the University of Chicago Press. Nelson’s research on the railroad began about the same time as work on the Affordable Care Act was ramping up, literary critic Henry Louis Gates, Jr., was arrested and singer Michael Jackson died. His ruminations on those events found their way into the travelogue.

“The object lesson is that you can’t isolate slavery from race relations today, from other things that are going on,” he says. “In Alabama, for example, you’re not going to find all sorts of monuments to escaped slaves, but you will learn a lot about slavery. But you also learn about how odd and weird and complicated race relations were in the South and North at that time.” The travelogue-cum-essay on race relations, “On the Underground Railroad,” is expected to hit bookshelves in 2017.

“Dakar: The Making of an African Metropolis” (its working title) began as an examination of the city in the 1960s, when an explosion of infrastructure, an international art exhibition and Sénégalese filmmakers were transforming Dakar’s culture and space. The work has since grown into a multidimensional cultural history of the city from its founding in 1857 through roughly 2000.

“All of these books take their cues from art and architectural history because that’s my training,” he says. “But then once they start to roll, they become total polyglots.”

This has been adapted from a story posted on the UCLA International Institute website.