Center for the Art of Performance at UCLA has unveiled its 2016–17 season which features familiar and iconic names in theater including Mikhail Baryshnikov and Robert Wilson; a rare eight-night residency from perennial spoken-word favorite, humorist David Sedaris; work from three artists of the Judson Church era of dance; and a concert slate highlighted by Burt Bacharach, Diane Reeves, Pat Metheny, Kronos Quartet and more.

“We stand as a powerful interlocutor across generations and cultures,” said Kristy Edmunds, CAP UCLA artistic and executive director. “Through our curatorial and presenting programs, we are able to link the art of performance to the boundless research and scholarship areas throughout UCLA as a whole.”

This is the fifth season Edmunds has led UCLA’s performing arts presenter. One of several initiatives she instituted is an artist fellows program that allows the center to consistently present and collaborate with master artists across performance disciplines.

Highlights from the upcoming season include performances from several CAP UCLA Artist Fellows. Wilson, the renowned American theater maker, returns to the 2016–17 program with “Letter to a Man,” (Nov. 18–19) performed by Baryshnikov. Award-winning dance-theater maker Ann Bogart of SITI Company returns for a third consecutive season. This time she’s directing a restaging of Kurt Weill’s and Maxwell Anderson’s “Lost in the Stars.” (Jan. 28–29) in collaboration with the Los Angeles Chamber Orchestra. CAP UCLA Fellows Kronos Quartet will perform “Beyond Zero: 1914-1918,” a piece featuring an experimental film from Bill Morrison and score from Serbian composer Aleksandra Vrebalov.

“Part of our mission is about facilitating continuity and progression which is vital to public legacy,” Edmunds said.

One of the most enduring artists on the CAP UCLA program is Sedaris, whose annual appearances at Royce Hall are sold out. In the 2016–17 season Sedaris takes up residence at Macgowan Hall in eight intimate performances Jan. 22–28, 2017 in the 178-seat Little Theater for “Work in Progress,” during which the noted humorist will develop material for his upcoming book “Theft by Finding.”

In her first season as artistic director of CAP UCLA, Edmunds established Los Angeles a place of legacy for New York dancer and choreographer Trisha Brown. The Trisha Brown Dance Company: Retrospective Project included a weeklong series of programs performed in Royce Hall, at the Hammer Museum at UCLA, at the Getty Center, at UCLA’s Sunset Recreation amphitheater and even down the side of the Broad Arts Center on campus.

The new season continues to explore Brown’s legacy with another multi-performance, multi-location presentation of the Trisha Brown Dance Company. “In Plain Site” will run from March 7–12. Details on repertoire and collaborating institutions will be announced in September.

Brown is a key figure in what is known as the Judson Church era, which includes a collective of dancers, composers, and visual artists who performed at the Judson Memorial Church in Greenwich Village from 1962 and 1964. 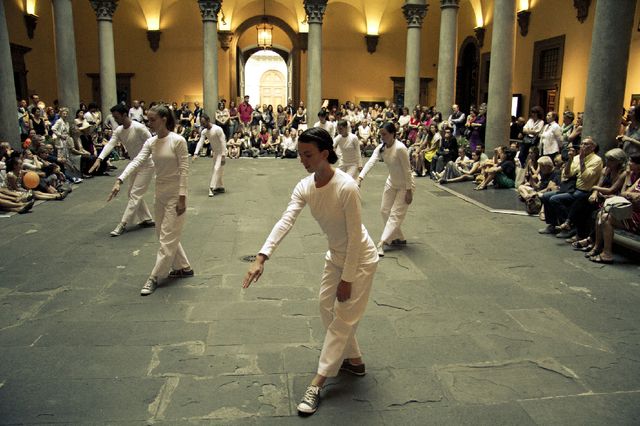 CAP UCLA will also present work from Judson Church artist Lucinda Childs, with an evening-length retrospective of early and recent works highlighting five decades of her company. “Lucinda Childs: A Portrait” (1963–2016) will be performed Nov. 5 in Royce Hall and will include her most recent piece of choreography “The Sun Roars Into View.” And Oct. 15–16, CAP UCLA presents influential Judson-era choreographer Deborah Hay with “As Holy Sites Go/duet” at Freud Playhouse.

Another theater highlight includes “Complete Works—Table Top Shakespeare” performed by British theater troupe Forced Entertainment Dec. 6–11 in multiple hour-long performances per day. This unique program is completely housed on the Royce Hall stage. Audiences will be seated on the stage to watch performers comically retell each of Shakespeare’s 36 plays using miniature figurines and everyday objects on a simple table-top surface.

CAP UCLA has co-commissioned two performances for the coming season. “50 Song Memoir” is the upcoming album from songwriter Stephin Merritt’s indie-pop recording project Magnetic Fields. It will be performed in full over two nights in Royce Hall (April 27–28). The music will be played and sung by seven performers in a stage set highlighted by 50 years of artifacts — from vintage music devices and magazines to newly invented instruments. With “Rules of the Game,” CAP UCLA has supported the collaboration of choreographer Jonah Baker, scenographer Daniel Arsham and composer Pharrell Williams. It is a work for eight dancers inspired by Luigi Pirandello’s play “Ill Gioco Delle Parti,” an Italian comedy written in 1918.

For a complete look at the coming season, visit cap.ucla.edu.

Series subscriptions are available for purchase starting May 20 through the CAP UCLA website. Individual tickets go on sale July 15. At that time, UCLA faculty and staff will be able to purchase discounted tickets at $25, two-per-event while supplies last. Student tickets, priced at $15 go on sale Sept. 19.