Sixteen undergraduate students representing the arts, humanities, engineering, math, music, science,and social sciences were honored with the 2021 UCLA Library Prize for Undergraduate Research. The student researchers were recognized for leveraging library resources and collections to enhance the quality of their research papers and course projects. Winning entries covered topics from the effects of COVID-19 and associated social stigmas on undocumented communities to the role of diet and exercise in the gut microbiota and metabolism to the zoopolitics of listening.

“Each library prize recipient demonstrated remarkable intellectual curiosity, as well as the skills and capacities to conduct meaningful research,” said Ginny Steel, the Norman and Armena Powell University Librarian. “The projects are compelling, thought-provoking and inspiring, and reflect the library’s commitment to offering multiple pathways for students to connect with our expert staff, services and content.

Award recipients’ projects are published on eScholarship, the University of California’s open-access research repository, offering their work to a broader audience. 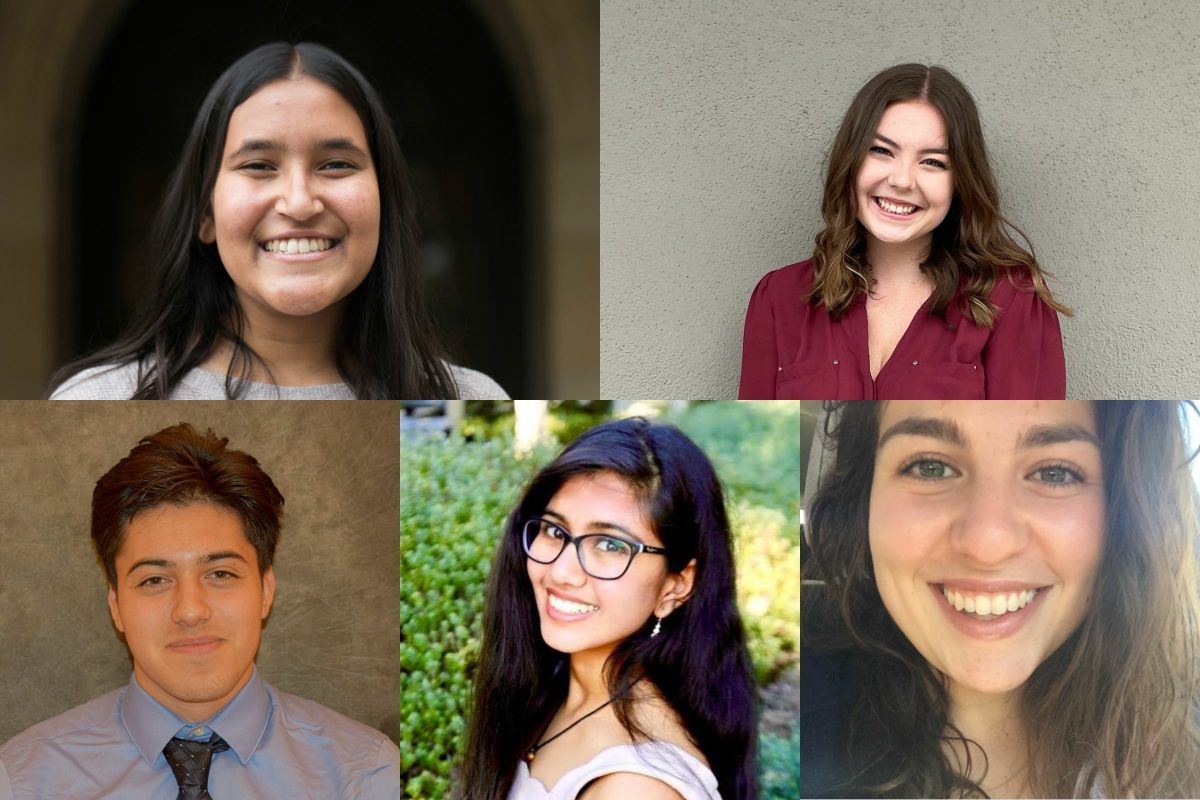 Project title: A Battle of Two Fronts: Effects of COVID-19 and Social Stigma on the Undocumented Latinx Community in California (podcast)

Researchers’ summary: By following the story of “Juan,” we have isolated a number of possible explanations as to how and why this stigma has had such a devastating result. This [podcast] episode will focus on governmental regulation of and rhetoric towards undocumented immigrants that has perpetuated a cycle of mistrust, resulting in an epidemic of undocumented Latinx peoples who fear the health care system. In addition, by examining pre-existing conditions and access to health care in undocumented Latinx communities, we attempt to explain the connection between stigma, the pandemic and adverse health outcomes in these communities. 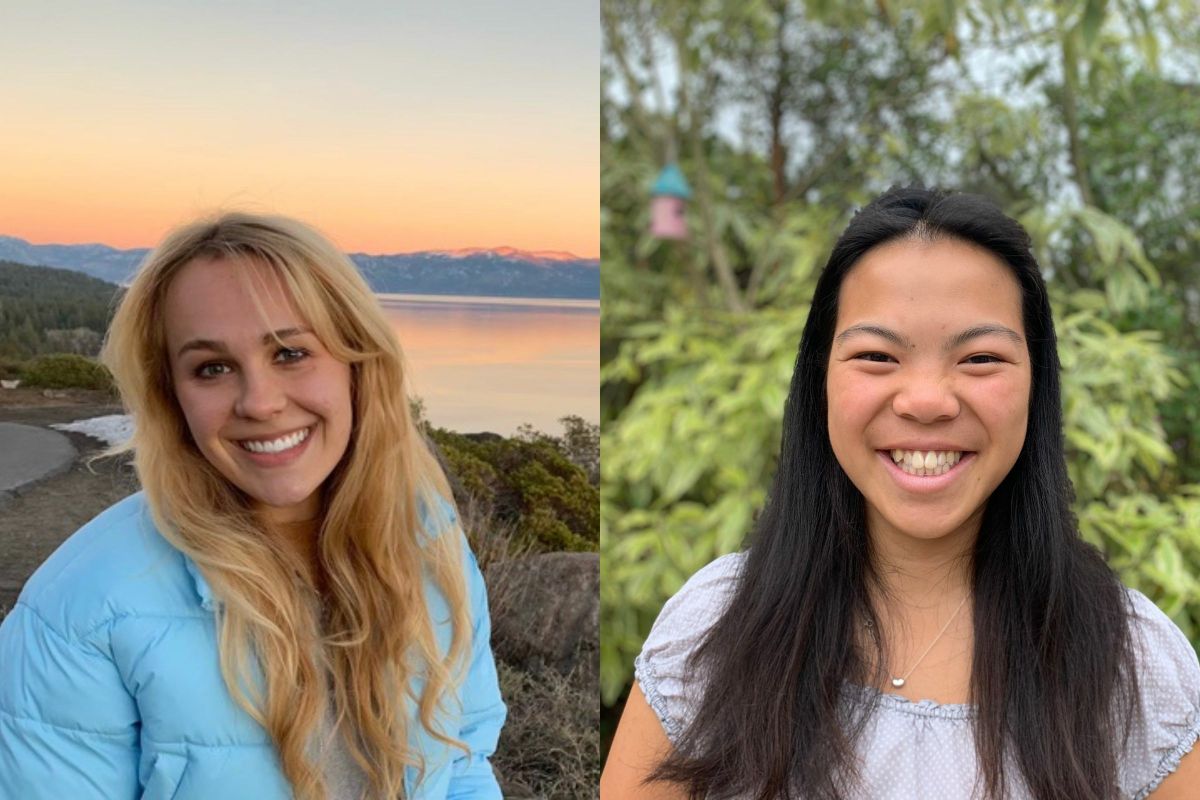 Images courtesy of the students
From left: Olivia Bielskis and Kristen Tam

Researchers’ summary: Competition in the agricultural marketplace has significantly declined as a result of decreasing antitrust enforcement and increasing consolidation. In the current market, the largest firms control disproportionate percentages of market power, threatening consumer prices, principles of equal economic opportunity, and viability of small firms. Agriculture contributes to 10.5% of the United States’ greenhouse gas emissions. The necessary reduction of emissions is hindered by dominating large farms’ tendency to employ practices that increase emissions, contrary to small farms. Agriculture consolidation has increased due to non-precautionary approaches by the Supreme Court and federal regulation agencies. Specifically, the Supreme Court’s ruling that the “threat of loss of profits due to possible price competition” does not constitute antitrust harm has hindered the implementation of the Clayton Act. Additionally, the federal agencies responsible for regulating mergers have increased the number of mergers they approve. The lack of strict antitrust regulation to prevent mergers from holding undue percentages of the marketplace is hindering the growth of regenerative farming, a set of practices that will be integral in combating climate change. 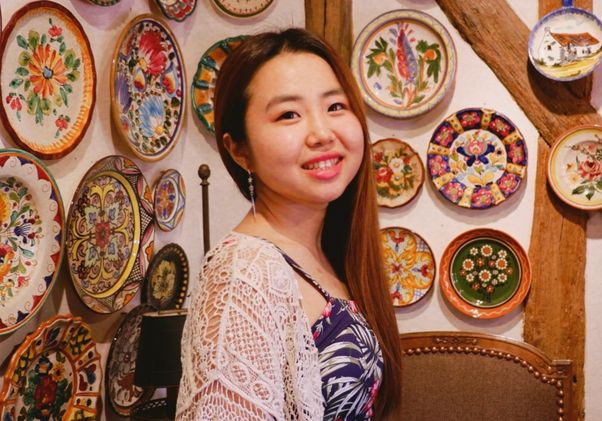 Bai’s summary: The Pavilion of Hangul pixels at the Expo 2010 in Shanghai attested to South Korea’s booming economy and rising popularity of its culture in the contemporary era. However, Korea’s early experience with expositions demonstrates its struggle with nation branding and autonomy. To debrief this tumultuous path, this paper examines the visual culture of Korea in international and national-scaled expositions from 1893 to 1929, encompassing the end of dynastic history, the short life of the Korean Empire, and the colonial era. The role of designership and audience in presenting Korean culture is analyzed under autonomous and colonial contexts. This research would serve to enhance the understanding of Korean nationalism through various visual representations of Korea and its culture in early modernity. 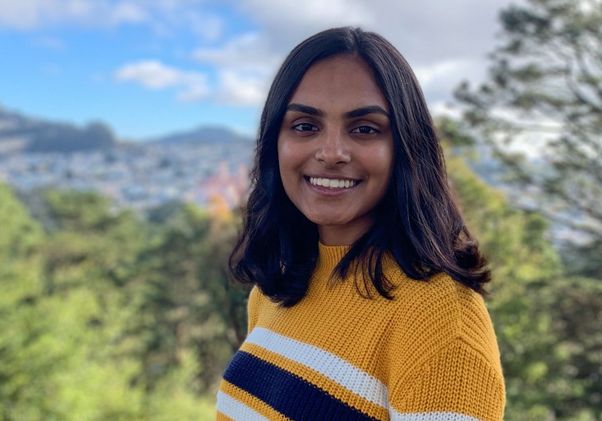 Project title: The Role of Diet and Exercise in the Gut Microbiota and Metabolism

Chandra’s summary: Diet and exercise have been established as contributors to human health, but less is known about how they interact to impact the gut microbiota. Based on scientific literature and evolutionary evidence, a combination of a minimally processed, fiber-rich diet and regular physical activity can benefit almost everyone. Diet and exercise affect one another; eating fiber-rich foods may increase the efficiency of physical activity and performing physical activity alters hormones that regulate food intake. This review explores the mechanisms by which diet and exercise affect one another as well as how they affect SCFA (short chain fatty acids) production, gut microbial diversity and gut barrier integrity. 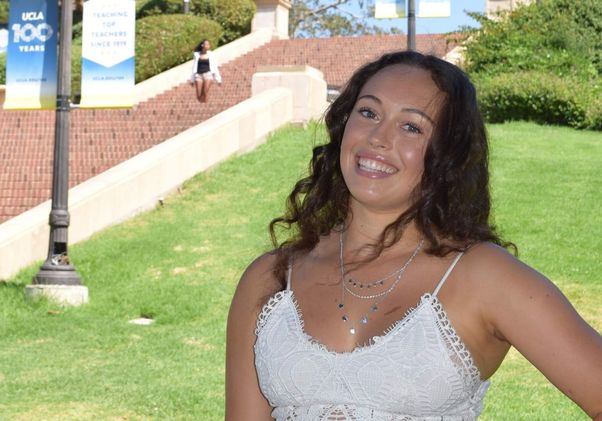 Ervin’s Summary: Detection of solar coronal holes and active regions is necessary to build a robust model of the solar corona to better predict the effects of space weather on our lives here on Earth. Large scale ejections and solar storms can have a large effect on life on Earth, affecting our power grid, ground- and space-based telecommunications and producing the beautiful auroras we see here on Earth.  We build upon a synchronic mapping and detection pipeline where long-term averages of solar disk images are used to compute corrections for inherent intensity differences across the solar disk and between spacecraft. Full-Sun maps are built using a merge-mapping process favoring lower intensity data and we improve our detection capabilities using machine learning techniques. This allows for the removal of intrinsic human bias from our detections, mitigating a major problem of fuzzy boundaries when studying the solar corona. These updated methods ultimately allow for the creation of a more standardized model for region detection and mapping. 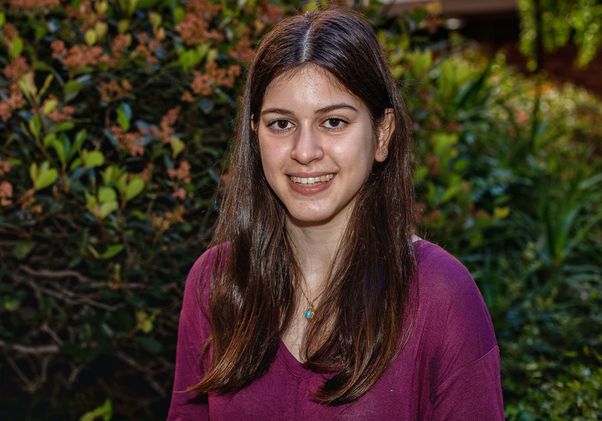 Sawaya’s summary: Estrogen and progesterone regulate sexual receptivity by acting through a neuronal circuitry within the hypothalamus. Therefore, the time course of hormone administration in female rodents is critical to elicit sexual receptivity. To understand this effect, ovariectomized female mice were grouped in one of the three time groups: 24 hours, 16 hours, and 48 hours between estrogen and progesterone treatment. Animals were treated with estrogen and progesterone, tested behaviorally, and sacrificed in order to perform immunohistochemistry for progesterone and u-opioid receptor expression. The 16- and 48-hour time group demonstrated significantly reduced lordosis quotients in comparison to the 24-hour group. No significant differences in progesterone receptor nor u-opioid receptor expression were found in either group, although the 16-hour group did present an upward trend in progesterone receptor expression. These findings highlight the temporal dependence of estrogen’s action in the hypothalamus which eventually facilitate sexual receptivity. 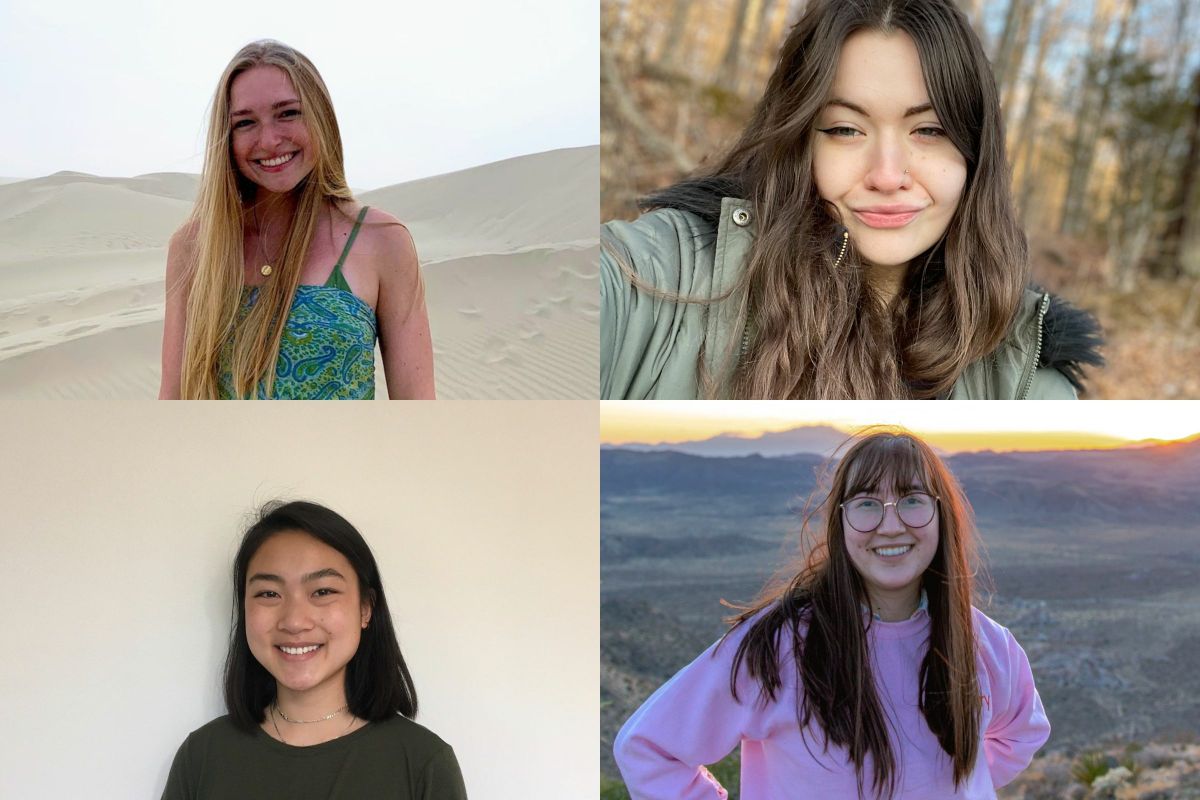 Researchers’ summary: Increasingly high temperatures in Southern California often result in an unequal experience to heat, with lower-income communities and communities of color disproportionately facing the negative effects of heat. Although public parks offer a prime avenue for heat mitigation, features of parks are not equally distributed. This study focuses on the central Los Angeles neighborhood of Westlake and analyzes its two largest parks: MacArthur and Lafayette parks. This study finds these parks are located in areas of relatively low income, with high population density and renter-occupied housing. The project also incorporates how the history of the parks and the features available within the space, such as tree canopy cover, bodies of water and recreational offerings can potentially impact the parks’ heat-mitigating effects. Through demographic research, archival newspaper photographs, geospatial mapping and analysis, and references to current studies on heat and urban parks, this study aims to produce a narrative on the heat-mitigating effects of these parks within the greater Westlake neighborhood. 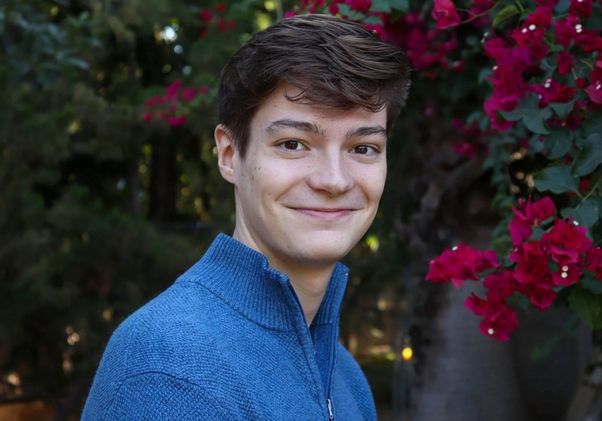 Project title: Voicing the Fox: Vulpine Bodies and the Zoopolitics of Listening

Faculty mentor: Mitchell Morris, professor and chair of musicology and of LGBTQ studies

Clark’s summary: Tracking how red foxes have been constituted by humans through sound, specifically through articulations of voice, this project locates the fox as a liminal figure in the Western cultural imaginary, subject to conditional appraisals of personhood. Interpreting three disparate cultural sites wherein red foxes come to be “voiced” by humans — via representation in early 20th-century opera, the listening practices of a New Jersey foxhunting community and recent discourses around internet videos featuring rescued fur-farm foxes — I ask how the voice is mobilized to demarcate, police and legitimize boundaries of non/personhood along and across species lines.

The UCLA Library prizes for undergraduate research are made possible by Ruth Simon, UCLA alumna and former UCLA campus counsel. The prize for music is funded by the UCLA Music Library’s Hugo and Christine Davise Fund for Contemporary Music.