In 1959, the UCLA Faculty Center opened its doors to faculty who by paying their 50-cent monthly dues could enjoy meals and a home away from home on campus. But the center was and always has been much more than this. For decades, it has provided an array of services that includes hosting conferences, banquets, receptions and meetings.

During its last 63 years, the mid-century modern building nestled just west of Hilgard Avenue has helped enhance collegiality and good relationships among faculty and staff across the entire campus. Within its glass walls and amid its open floorplan, colleagues have shared lunches, entertained prospective hires, rented out space for meetings (even weddings), and celebrated holidays with family and friends.

While many have cherished the Faculty Club for its time-capsule-like feel, by 2016 the building needed structural and infrastructure work. The roof was leaking, roots invaded the pipes, electrical systems needed upgrades, and the air conditioning and heating systems struggled to keep the temperatures comfortable. In addition, over the years, the building had been modified with finishes and lighting fixtures that contrasted with mid-century California Ranch style.

The club also needed painting and new carpets, and the outside trellises needed replacing. But a renovation had to be done carefully to preserve the integrity of the building and its contributions to campus culture and history.

So in 2019, UCLA allocated $10 million to the UCLA Faculty Center Association’s board of governors to cover an extensive infrastructure upgrade and seismic reinforcement of a few areas. Thanks to contributions from donors, including professors Donald and Sherie Morrison, more than $3 million has been raised to address a variety of improvements.

“This building is deeply beloved by many across campus, but time certainly took its toll,” said Chancellor Gene Block, who was enthusiastic to support the renovation project. “The renovations were needed to ensure that many more generations of Bruins would be able to enjoy the space and use it to forge strong bonds.” 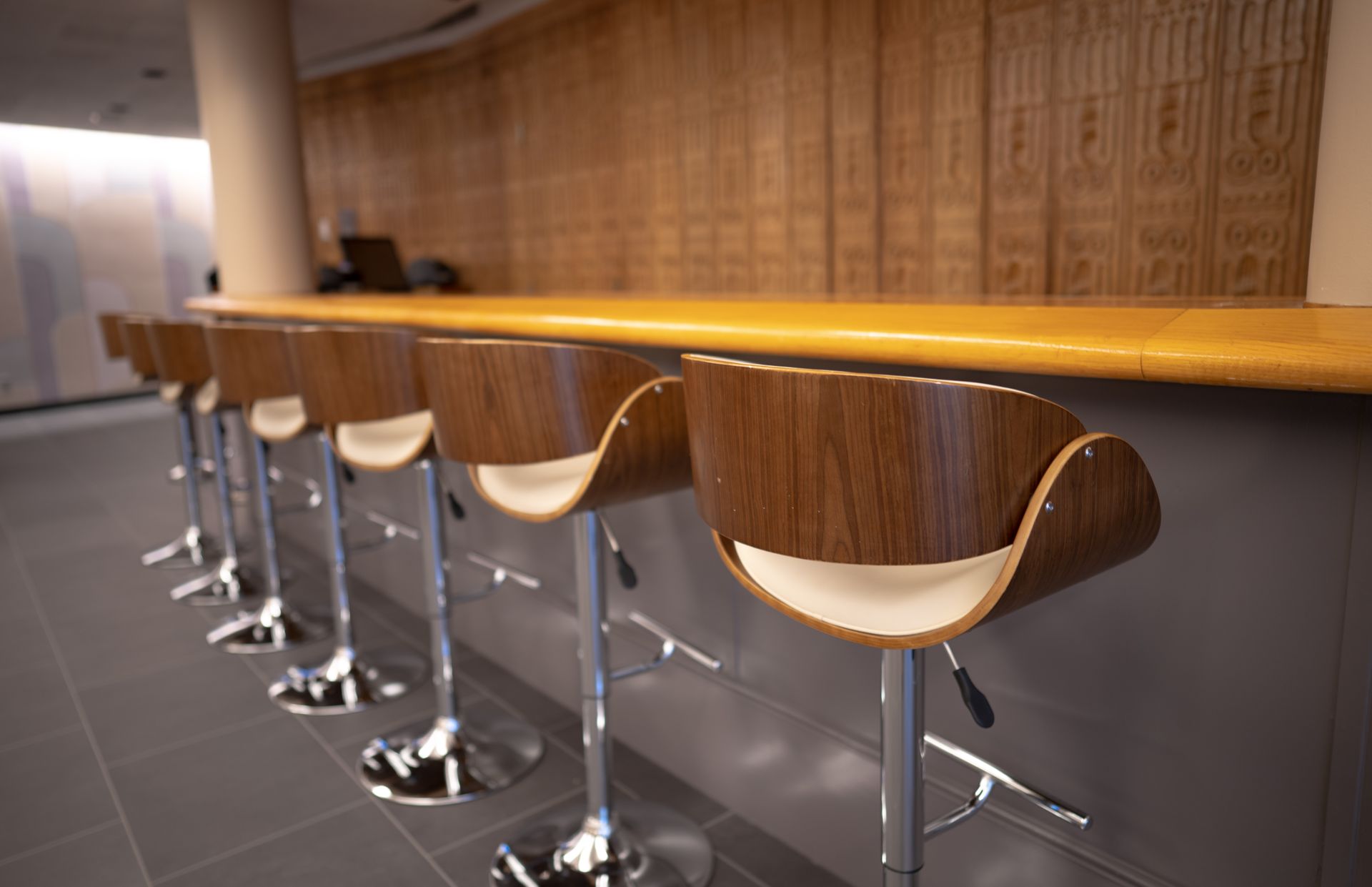 David Esquivel/UCLA
Carved redwood panels made by artist and designer Evelyn Ackerman were restored as part of the Faculty Club’s refurbishment. The 2022 restoration was funded by Michael and Susan Rich in memory of Peter Loughrey.

The renovations, many of which coincided with pandemic-related closures at the club, have been a success. From reinforcing the beloved building’s bones to refreshing its overall look and function, the changes have readied the club to carry on its role as the hub for UCLA’s most important engine — its faculty and staff. Still, there’s more to do, including renovating the lobby and north bathrooms. Fundraising for these improvements is ongoing.

A seed was planted for a faculty clubhouse as early as 1918, when female faculty at Los Angeles’ State Normal School (a teacher-training school and the forerunner of UCLA) founded the Faculty Women’s Club. Their organizing focused on pressuring the legislature and the UC Regents to establish a second branch of the University of California.

By 1919, the UC Southern Branch was finally materializing, but the women faculty found themselves using a kindergarten bungalow of the Normal School as an interim meeting space.

“Can’t you just picture these faculty women sitting on teeny chairs in front of teeny tables?” said Jo Knopoff, a past president of the Faculty Women’s Club who also served nine terms on the Faculty Club board of governors. She guesses that the inconvenience of the bungalow spurred immediate fundraising efforts toward the building of a clubhouse.

UCLA
The Faculty Center, as it was known when this photo was taken decades ago.

They weren’t the only ones.

The Faculty Men’s Club and the Association of Academic Women, both having risen up as the UC Southern Branch came into focus, had also been fundraising to secure a clubhouse on the Westwood campus. It would eventually take four decades and the three organizations working closely together to get the funding for a building.

Knopoff said the men’s club held the most sway, in part because there were more male faculty, but more likely, she speculates, because their wives were influential in urging their husbands to open their pocket books.

By 1950, preliminary plans for a faculty clubhouse at UCLA emerged. At one time, early plans included a pool and even an apartment for the UC president, but these were eliminated from the final design. The UC Regents approved the final proposal in 1956.

A place to see other sides of people

In a sign of the times, when the club opened in 1959, the buffet cost just 90 cents per meal and men, who made up most of the club’s members, were required to wear a jacket and tie. Women were not allowed to wear slacks.

But behind the closed doors of a small room adjacent to the California Room, men loosened their ties and rolled up their sleeves to play billiards, sip cocktails and smoke after a long day’s work, said Al Aubin, chair of the Faculty Club’s board of governors’ member engagement committee. Aubin said he still remembers his undergraduate philosophy professor asking him to bartend an event in the room sometime during the early 60s.

Aubin also recalls the wonder of seeing faculty in a different light, male members who called themselves the “Collegium Bibendi,” but whom Aubin remembers as being an honorable bunch committed to the academic community across both north and south campus.

“What I always emphasize about the faculty club is its sense of community,” said Aubin, a UCLA retiree and volunteer who has been involved with campus for 56 years.

By the late 1960s, men visiting the club could lose the jackets and ties and more women were members — women like Jane Permaul, current president of the board and assistant vice chancellor emerita of student affairs.

“Being a working mother at that time, I had no chance of making lunches so I’d always be running over to the faculty club for a bite to eat,” she said.

Aubin likewise has enjoyed the club’s benefits for family members, like the popular Mother’s Day and Easter brunches, which have delighted four generations of his family over the last 40 years. In 2019, Aubin said he loved getting his great-grandson’s picture with the event’s “Easter Bunny,” the same picture he snapped of his granddaughter a generation before. 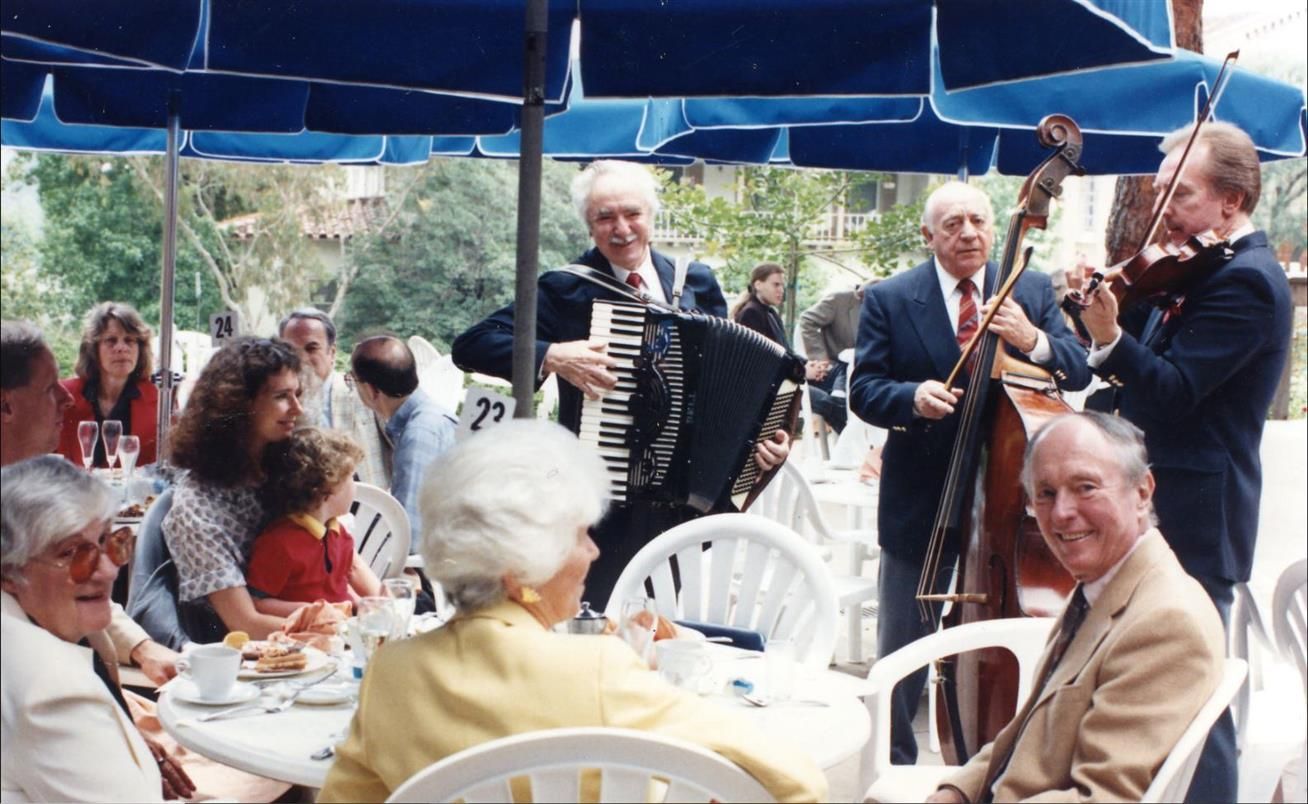 The club has truly been a special place and not something many universities have, said Henry Kelly, distinguished research professor emeritus, who joined the Faculty Club in 1967.

“The club has been important to me during all of my years at UCLA, and I’m grateful for having been able to enjoy its amenities,” Kelly said.

When current club general manager and chief operating officer Luciano Sautto was hired in 2016, he was struck by the buckets strewn about the building to address the leaking roof.

While the space had undergone several additions and alterations, after the late 1980s there had been few significant upgrades made to the building. Structural concerns and plumbing problems aside, much of the flooring, window coverings and décor were also in need of an upgrade. 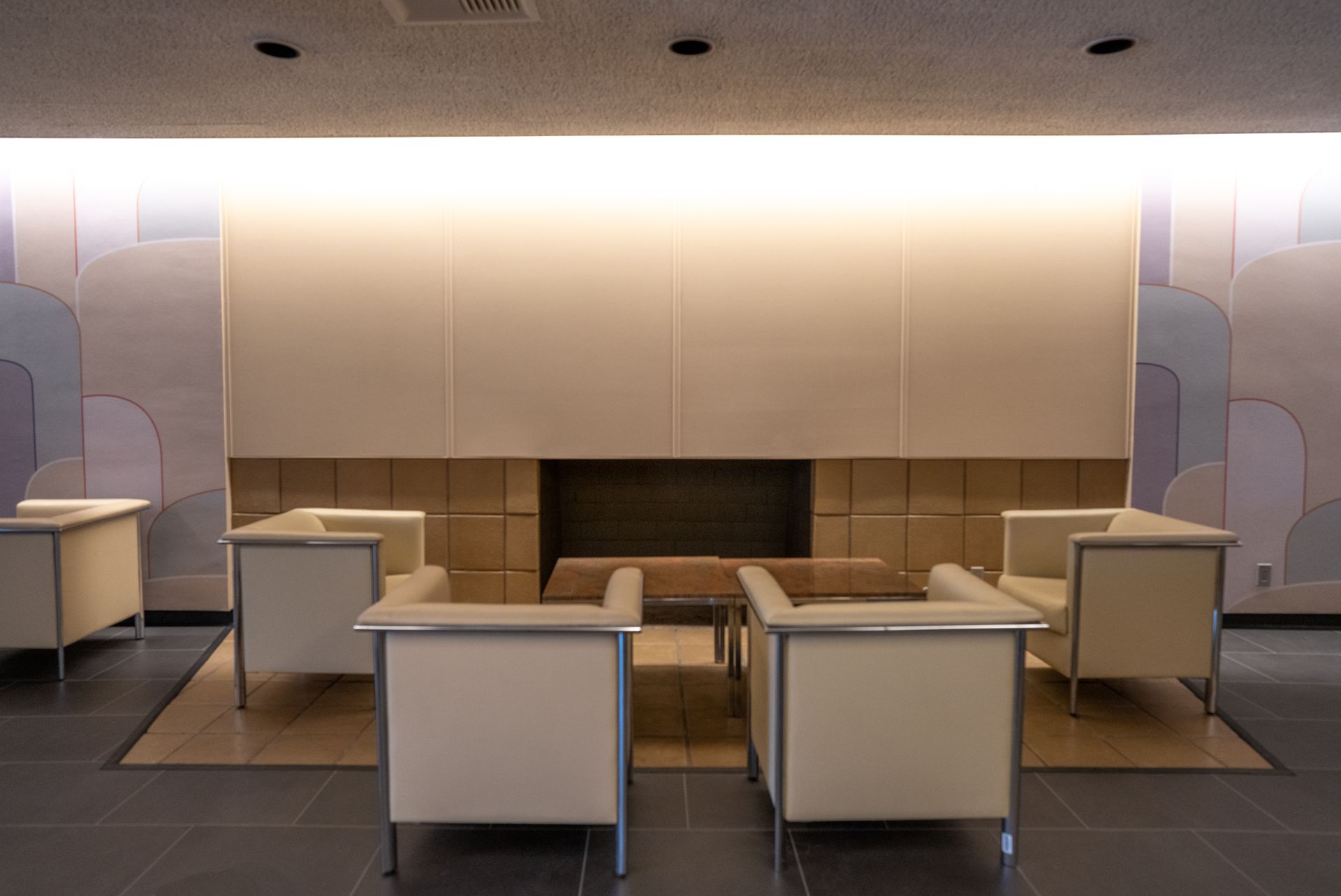 The original building, a “ranch-style” structure contemporary of its late 1950s mid-century modern aesthetic, has been enjoying renewed popularity in line with current design trends. One of the defining characteristics of the Faculty Club is the integration of gardens and terraces. Each meeting or dining room has an adjacent garden room and access. This “plaid” of indoor and outdoor spaces, within a residentially scaled building, is unique to campus.

In contrast to campus’ signature Romanesque revival buildings meant to be stately and impressive, the faculty club has served as a quasi-residential space, said Victoria Steele, curator emerita of UCLA Collections.

Other noticeable changes, and those which Sautto is most proud of, are the updating of the California Room (now the Morrison Room), main dining room, Servery and the new bathrooms at the south of the building that are energy and water efficient, and accessible for the disabled. The Cypress Bar and Lounge has also gotten a makeover, now featuring new flooring, painting, wallpaper and fireplace insert, and on its patio, a water feature and fire pit.

On a recent tour, Permaul proudly shared that the club’s four fireplaces, which haven’t operated “in years,” have been upgraded to burn an eco-friendly alcohol gel in place of wood.

To date, the funding from UCLA has supported replacement of the roof, deteriorated rafter tailings and rotting outside trellises; plus, the heating, ventilation and air conditioning systems throughout the building.

Sautto suspects the first thing members might notice is the absence of buckets.

“This is our second chance to make a first impression,” he said.

Sautto’s focus is now reaching out to untapped potential members. In dining areas like the Cypress Bar and Lounge, Sautto’s created a “small bite” menu and, in the Servery, has added more vegetarian and vegan offerings like Impossible burgers and an improved salad bar. The upgraded menu will make the al fresco dining at the Coral Grill, the club’s wait-service restaurant, even more special, he said.

Steele said she’s eager for diners to enjoy the updated patios as premiere eating spaces. Those using the club as a venue can also benefit from the large outdoor areas as public health recommendations remain fluid. Of course, there people will be able to enjoy the new trellises.

“Soon, once the flowering vines reestablish themselves and twist along new overhead guide wires, it will once again be shady and green.”

The Garden Patio and the library will also be available to members.

The club will be open for all services starting Sept. 22.

Interested in joining? Membership is open to UCLA faculty and staff, visiting faculty and researchers, UCLA emeriti and retirees, UCLA alumni, parents of UCLA students and alumni, and members of the community. Faculty Club membership information.