One of the ways that audiences can engage with the sights and sounds of the past is through new cinematic works, television shows and exhibition spaces that weave in and contextualize archival footage. Rare materials preserved and digitized by the UCLA Film & Television Archive can be seen in many new productions each year, ranging from Ken Burns’ sweeping documentary series to feature films like “Inherent Vice,” “Trumbo” and “Selma.” The media licensing department works with filmmakers and curators to research the archive’s licensable collections and provide footage for these projects. In keeping with the World Day for Audiovisual Heritage theme for 2019 — “Engage the Past Through Sound and Images” — Danielle Faye and Kara Molitor of the media licensing department talked about their work sharing historical footage with contemporary audiences.

What is the scope of moving image materials that may be licensed from the UCLA Film & Television Archive?

Faye: The oldest materials in our licensable collections are short films that date back to the late-1890s. We have the only existing copies of many films and hundreds of one-of-a-kind early television programs. The Hearst Metrotone News collection (1915–1977) and KTLA News collection (1955–1981) have very unique footage of historical events, like rare original nitrate film of the Hindenburg disaster. We also have an extensive collection of LGBTQ history coverage, such as filmmaker and activist Pat Rocco’s films that document the early days of the gay rights movement. Some of my favorite materials include 1950s–70s TV programs and films that feature rock or pop music, or ones about spies and secret agents.

How does celluloid footage in the vaults end up in a new production for the big or small screen?

Faye: The greater percentage of our collection exists only on film. While transferring these films to a digital format is an ongoing project with our preservation department, media licensing will usually transfer films when needed for specific clients. We have a fully functioning digital lab that produces great results. Our research is done using our online catalog and an in-house database. We also use the internet to research historical events, personalities, etc. Many times, we come across surprising and rare content in the process.

Molitor: For Hearst newsreel material, we can also go back to the original index cards that accompany the reels to find more information on people, places or events. Some cards have quite a bit of detail while others have only a few words and a date. In addition to transferring films for us, the digital lab is able to digitize a number of analog tape formats including 1-inch, Hi-8, quarter-inch reel to reel, and half-inch open reel. The lab staff are very knowledgeable and able to handle most of our client requests.

Tell us about some film, television or other media projects that were made with significant involvement from the archive.

Molitor: We’ve worked on many Ken Burns projects — “The Roosevelts,” “Jackie Robinson,” “Country Music”; CNN documentaries — “The Sixties,” “Tricky Dick,” “Race for the White House”; and international productions — 20th Century Project on NHK World Japan. Many of the projects utilized material from our Hearst and KTLA collections, but they also accessed material from our General Collection. For example, “Country Music” (2019) accessed clips from a feature called “Hollywood Barn Dance” (1947) and “The Jimmy Dean Show” (1957-1959). 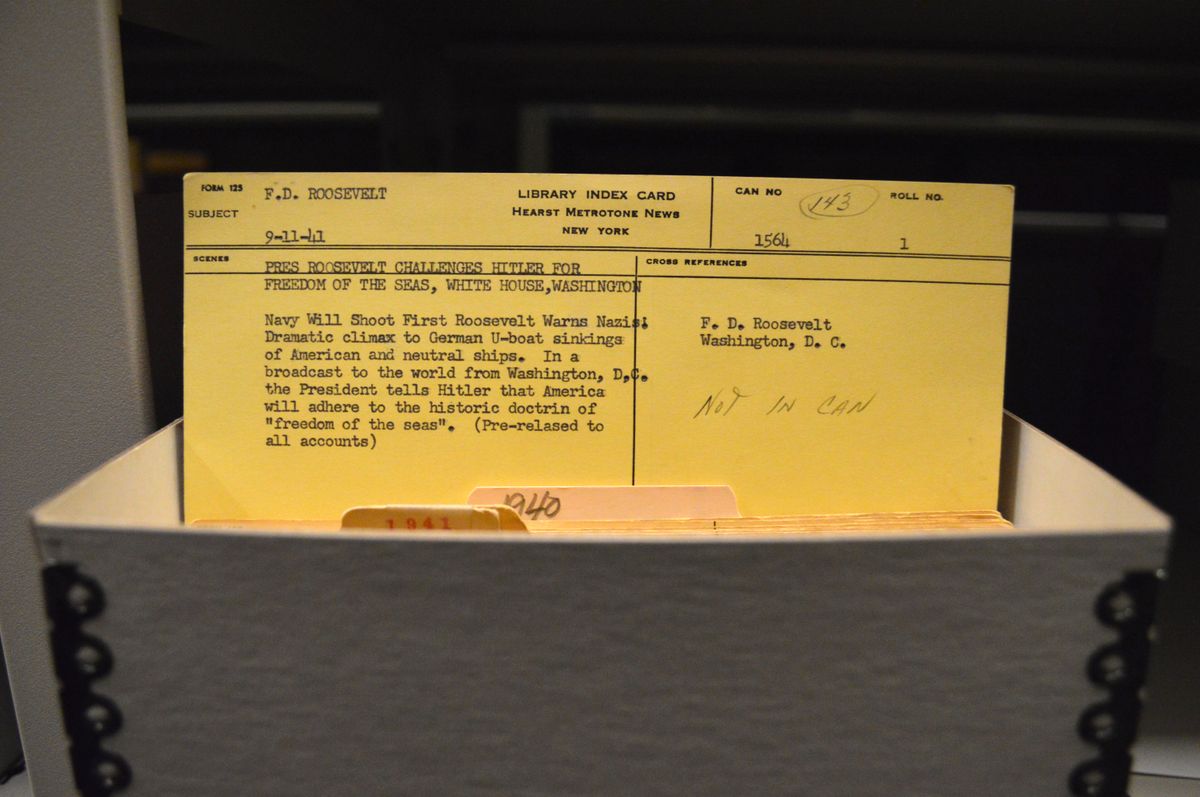 Are there evergreen subjects that have been regularly requested over the years?

Molitor: A lot of the time it depends on anniversaries that are coming up. Earlier this year, we had an increase in space exploration requests because of the 50th anniversary of Apollo 11 and the moon landing.

What is the most rewarding part of your work?

Faye: Once I was contacted by a filmmaker who was looking for footage of the Kindertransport of 1938, Jewish child refugees who were sent on ships to England to escape the Nazis. She was featuring a woman in her film who was one of those children and needed some footage to intercut with her interview. When she received the screener, the filmmaker discovered that the woman appears several times in the footage as a little girl, arriving in England with other children. It was a very emotional moment, as the woman saw herself after 70-plus years. Moments like that are the most rewarding part of my job.

Molitor: I’m always excited to find “new” material for our clients when researching in the Hearst index cards. Some of the items have not been seen since they were originally shown in theaters, and the clients are very pleased to have this unique footage for their productions.

Do you have a favorite film or TV show — media licensing project or not?

Faye: My favorite TV show is the 1960s British series, “The Avengers.”

Molitor: “Dr. Strangelove” and “Diabolique” are two of my favorite movies.

Learn more about media licensing policies and past projects.