Environmentalist foodies are a conflicted lot — people who want to taste everything, but who also want to preserve everything. A crowd of these sustainable gourmets gathered recently at UCLA to hear from some of the top chefs and food professionals in Los Angeles about grass-fed beef, greenhouse gases emitted by agriculture, and the environmental value of pâté.

The nonprofit Chefs Collaborative and UCLA co-hosted two dozen speakers on May 2 for a series of sustainable food panels, featuring food-scene stars like Mary Sue Milliken, the co-chef and co-owner of Border Grill; and UCLA alumnus Ray Garcia, the chef of Broken Spanish. Some of UCLA’s top minds on sustainable eating also spoke, including Al Ferrone, senior director of UCLA Dining Services; and Patti Oliver, the director of nutrition for the UCLA Health System. “For dessert,” as organizers put it, came the Gold brothers: Pulitzer Prize-winning food critic Jonathan Gold and UCLA Associate Vice Chancellor for Environment and Sustainability Mark Gold.

On campus, Ferrone’s team serves 31,000 meals per day, and he noted there were challenges on the road to sustainability.

But the health-oriented Bruin Plate that opened in 2013 and recently became a four-star Certified Green Restaurant uses an increasing percentage of local produce, sustainable seafood, fair-trade coffee, and low-meat and vegan main dishes, and quickly became the most popular dining hall. The Flex Bar in another hall uses meat sparingly and more as a seasoning, with lots of high-fiber, high-protein foods in the mix. Ferrone also talked about his department’s new teaching kitchen, where students learn how to make affordable, healthy food to ensure Bruins aren’t helpless after years being catered to in the dining halls.

Oliver spoke about the hospital cafeteria’s controversial move to get rid of their fryers. While some diners still inquire wistfully about tater tots, she said, business is as brisk as ever. The salad bar dropped to $4.99 a pound instead of $6.99 to encourage healthy choices, while the cost of soda increased. Green apple logos make it easy to find wholesome dishes, and locally sourced produce and sustainable fish make frequent appearances.

Their efforts coincide with a number of environmental initiatives at UCLA including the Sustainable LA Grand Challenge and the Healthy Campus Initiative.

But not every eater, cafeteria or restaurant can afford sustainable fish or grass-fed beef, speakers on the next panel acknowledged. The key is to include less meat, but better meat, in your diet or on your menu, said Courtney Crenshaw, the California coordinator of Healthcare Without Harm.

That’s important for a couple of reasons, said Dana Hunnes, senior dietitian for Ronald Reagan UCLA Medical Center, who is also an adjunct assistant professor with expertise in sustainable food. Less meat can help reduce the surprisingly large amount of greenhouse gases emitted by agriculture. Better meat, such as grass-fed, antibiotic-free beef, is a solution to the way many large-scale ranching methods for grain-fed cows can contribute to antibiotic resistance in humans, Hunnes said. 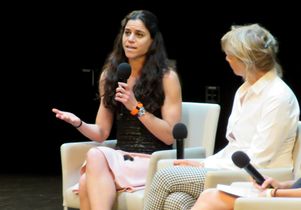 Those are some of the reasons that Milliken changed the kind and amount of meat she used in her restaurants, and why consumers should ask servers, chefs, grocers and farmers about their food.

“That’s how they’ll know you care,” Milliken said. “Each of us has so much ability to make a statement every time we make a choice of what to eat.”

They were followed by a panel about the potential — or lack thereof — for more holistic, grass-fed ranching. Moderator Adam Danforth, a James Beard Award-winning author of “Butchering Beef,” contended that a misplaced emphasis on tenderness over flavor supports unsustainable ranching methods. Tenderness can be achieved with proper cooking methods — or by confining cows to produce underused muscles and extra fat, and slaughtering them young by using hormones for faster growth, Danforth said. Flavor, he said, comes from activity in muscles, age and a good diet.

“Quality has to do with flavor, not tenderness,” Danforth said. “Choose flavor.”

Eagle Yu, the head butcher of Aged Butchery, a farmers market butcher shop and one of few whole-animal butcheries, talked about the challenges of using a whole animal to reduce food waste. He uses bones and sinews to make stock, but said he still struggles to use kidneys — although he once turned them into artisanal dog biscuits that pet owners snapped up.

For the average consumer, “Look outside of the primary steak cuts and learn to use the slow-cooker-type, uncommon cuts,” Yu advised. “Learn to use offal … It’s easy to make your own pâté at home, just buy a little bit of liver. Beef tongue is great …. Oxtail is very popular and great in the slow cooker.”

A panel of chefs explored sustainable restaurant management, covering topics like pay disparities between servers who earn tips and cooks who don’t (the chefs only half-jokingly noted that diners can hand money to anyone). Notable chefs Garcia, Nyesha Arrington, co-founder of Chefs for Human Rights Foundation, David LeFevre from MB Post and Neil Fraser from Redbird, ribbed each other about critical Yelp reviews and discussed mentoring younger staff.

And for dessert, sustainable seafood and the Golds

On a sustainable seafood panel, representatives from the Monterey Bay Aquarium Seafood Watch discussed eco-labels, and Chris Costello, a professor of environmental and resource economics at UC Santa Barbara, made a wry observation about how climate change is altering habitats: “Maine lobster is going to be Canadian lobster in 20 years.”

The Golds took the stage and lamented the lack of government monitoring to prevent seafood fraud.

“There’s no such thing as red snapper on a menu that’s red snapper — it’s wrong almost 100 percent of the time,” said Mark Gold. “We don’t really have effective monitoring programs on seafood.”

And while more seafood is becoming available locally, an estimated 90 percent of the seafood consumed in the United States is imported — much of it caught here, exported for processing and imported back, the brothers noted.

“In the 80s, sea urchin was disgusting,” Jonathan Gold said, recalling how it was caught off Santa Barbara, shipped to Tokyo and then returned. “It didn’t really profit from its long sea voyage.”

► Read more about the Golds’ conversation.