When Hajar Azzam was a young girl in the United Arab Emirates, she would watch anime cartoons dubbed into Arabic and pause the broadcasts long enough to sketch out the characters. As she lay in bed at night, she’d make up storylines and imagine how she’d animate them.

Azzam’s interest in drawing continued after she moved to the U.S. with her family at age 16. She began studying graphic design in high school and then added 3D modeling and animation to her portfolio when she enrolled at UCLA.

On June 13, she will graduate with a bachelor’s degree in design media arts, and her leadership and service to UCLA, through internships and campus jobs, have earned her a Chancellor’s Service Award.

Azzam wants to make art that raises awareness about issues that are important to her. She hopes that her skills in digital illustration, game design, and virtual and augmented reality can serve as tools for justice.

Throughout her time at UCLA, Azzam used her talents to celebrate her Muslim identity. She joined the Muslim Student Association when she arrived at UCLA and later became a board member.

“I’m not used to being a minority because I come from a Muslim-majority country,” she said. “I was very happy to see a group of people who are very proud to be Muslim and wanted to share that with other people.”

For a UCLA orientation for prospective students who are Muslim, she designed T-shirts and flyers with the slogan “Unapologetically Muslim.” For Hijab Day, an event that invited female students from all faiths to stand in solidarity with Muslim students by wearing the traditional Islamic headscarf for a day, she designed the flyer and poster.

“Unfortunately, there’s a lot of misconceptions about what a hijab is and why people wear it,” she said. “A lot of people think that I was forced into wearing this, that it’s not a decision that I took.”

Azzam says finding her place as a Muslim woman and an artist at UCLA has sometimes been a balancing act. She was the only art major in the Muslim Student Association, and, until her senior year, the only hijab-wearing Muslim in her department. She took it upon herself to teach classmates and professors alike about the Middle East, her hijab and her beliefs — which she said can be “exhausting.”

“I just get tired of being ‘the Muslim girl’ in these spaces,” she said.

But a 2019 internship offered a different perspective. Azzam landed an internship at Sesame Workshop in New York, where she helped produce an episode about refugee children for “Ahlan Simsim,” the Arabic-language version of Sesame Street.

She felt at home there, she said.

“I loved the diversity and all the different art communities there. It was my first time meeting a Muslim art community,” she said.

Whenever she felt homesick for the Middle East, she’d visit the halal pushcarts that lined her Brooklyn neighborhood. The vendors spoke to her in Arabic, asked her about her family and shared their own stories of coming to the U.S.

“I got a lot of free sandwiches,” she said with a laugh. “It was the first time I felt privileged for being Arab.”

Art and identity at UCLA

Although many of Azzam’s projects have nothing to do with her faith and background, some do. One was “Noor A’la Noor (Light Upon Light),” a gold-painted plywood box with Arabic letters carved into all sides that spell out a Quranic verse. 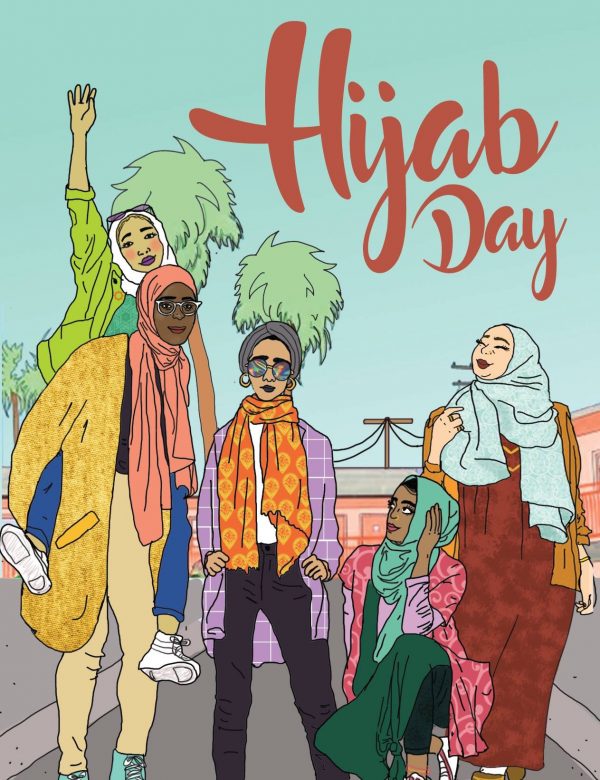 Courtesy of Hajar Azzam
Azzam designed this flyer for Hijab Day in 2017.

And, as a scholarship fellow at UCLA’s Game Lab, she created “Bayt Beaut,” a virtual reality role-playing game centered around a young woman in an Arab family.

Azzam hopes that the national conversation about representation and microaggressions, amplified by the current Black Lives Matter protests, will make students from marginalized communities feel more welcomed and recognized.

Hajar (pronounced “HA-zhur”) was raised in the historic city of Sharjah, the cultural capital of the UAE. Her father, a mechanical engineer, was born in a refugee camp in Lebanon. Her mother, an Islamic studies teacher, was born in Kuwait. They met as students in New Mexico, then moved the family to Lebanon before settling in the UAE.

Her introduction to digital art came in middle school, when she downloaded a hacked version of Photoshop onto her family’s computer. “I was just like, ‘Whoa, this is really cool!” Azzam said.

But her high school in the Emirates emphasized STEM fields, so art classes there were taught by physics and math teachers. It wasn’t until midway through her high school years that Azzam would get her first taste of formal art education.

A new start in Southern California

Her family moved to Orange County when she was 16 years old, and Azzam enrolled at University High School in Irvine.

At first, she felt isolated. She didn’t speak much English, and she was often asked by teachers to share her perspective as the sole Muslim in class, especially following the 2015 terrorist attacks in Paris and San Bernardino.

“I remember crying in class because I didn’t know what to say. My heart was feeling very heavy about the whole situation and being put under the spotlight like that in class,” she said.

But one benefit of her new school was that it offered formal art and graphic design classes. Azzam quickly realized that her art gave her new ways to express herself, and her talents flourished. During her senior year, she was picked to redesign the school’s merchandise.

“I asked myself, ‘Why make art, when people are dying?’ I want to create work that I feel has an immediate impact,” she said.

Inspiration for what’s next

After UCLA transitioned to remote learning in March, Azzam moved back in with her family, who now live in Bakersfield.

A post-graduation internship she had lined up was cancelled because of COVID-19. She’s now applying for jobs at animation studios and production companies, as well as nonprofits dedicated to community service, and she is considering pursuing a graduate degree in film.

The short film Azzam created for her senior capstone project, “Sorry for the Inconvenience.”

For her senior capstone project, Azzam created an animated short called “Sorry for the Inconvenience.” The film was inspired by the stories of the food truck owners she had met during her time in New York and by the sacrifices that immigrant mothers in her community make.

The story follows the life of an environmental activist whose husband dies when a car collides into his food truck. The woman is forced to give up her dream of becoming a scientist, but she manages to transform the repaired food truck into her dream job.

“That is what always ends up being the case,” Azzam said. “Life doesn’t give you exactly what you want, but you can be content with whatever you end up getting handed.”