James Murakami has been providing his best answer to that oft-asked question for 33 years as UCLA staff meteorologist. Working from his office in the Department of Atmospheric and Oceanic Sciences, he makes use of an array of weather-tracking instruments, online data, software and other sophisticated tools to form his prognostications.

But it takes more than science to predict the weather with a good degree of accuracy.

“Weather forecasting is 40 percent science, 30 percent art and 30 percent luck,” said Murakami, who hunkers down every workday to churn out a report that he posts by noon on his department website. UCLA Today, UCLA Newsroom’s daily morning digest, and the campus gateway page also feature his forecast, which delivers a quick look at the weather for the Westwood campus as well as a more detailed forecast that covers the greater Los Angeles region.

Murakami, who was born in Japan and moved to Los Angeles with his family when he was 5 years old, got hooked on the weather when he was 12. That’s when he discovered popular KABC-TV weatherman George Fischbeck, whose delivery style fused excitement and education.

“It turns out he was a teacher,” said Murakami. "He could explain why one high-pressure front would let in a storm and another one would not,” with the kind of fascinating details that inspired Murakami to study meteorology at UCLA, where he earned his B.S. in atmospheric sciences in 1982.

Most local weather reports — from television broadcasts to reports on your smartphone — predict the weather around downtown L.A., but the weather can vary greatly between downtown and Westwood, Murakami noted. In fact, he added, the Pacific Ocean, mountains and other variables of the L.A. region make for a variety of microclimates.

“It can be clear skies at UCLA, mostly clear in Santa Monica and completely overcast in Malibu,” explained Murakami.

For his Westwood-centered forecasts, Murakami looks at data from the National Weather Service and other sources, but he also collects data from weather instruments atop the Math Sciences Building to measure air temperature, wind, rainfall and more. 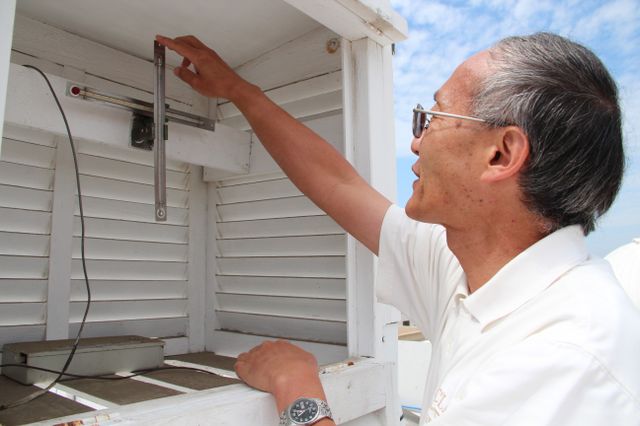 How to tell
a marine layer from
a Catalina eddy

Key to Murakami’s method is what he calls “massaging” the forecast — determining which parts of weather data are significant and which probably won’t have much impact.

In a highly detailed forecast for one day last month, for example, he cited data about a marine layer near the ocean; a wide swath of cloud cover that extended from West L.A. to the Inland Empire; an unstable air mass moving in from Mexico along with moisture from Hurricane Delores near Cabo San Lucas; and computer modeling predictions.

“The upshot of all this,” he reported succinctly, “is that warm, muggy and probably wet-at-times weather will develop.”

And then there’s the “30 percent luck” aspect to predicting the weather, which showed up in that same forecast:  “I’m unsure whether today's model trend of more moisture/instability for Southern California is right (might waffle back and forth right up to the weekend). ... At this point, Saturday looks to be the day for showers west of the mountains,” he concluded.

Murakami also faces the challenge of being a weatherman in a place that really doesn’t have much in the way of weather, given L.A.’s annual average of 292 days of sunny skies and temperatures that tend to typically fluctuate between warm and hot. Yet it’s this steady sameness, he warned, that can lull him into overlooking little details, leading to weather he didn’t expect sneaking up on him.

“The issue is complacency,” he said candidly. “The weather here is pretty consistent, so sometimes something surprises me. And then I go back and look at the data, and see that I missed something.” 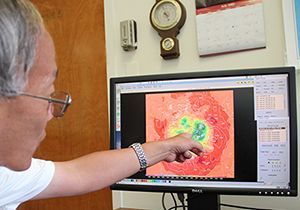 Christelle Snow/UCLA
Murakami points to a weather map showing a wind flow pattern over the northern hemisphere, one of the many charts he uses to prepare his weather forecasts.

When Murakami isn’t working up his local forecasts, he expands his horizons to follow weather occurring around the world — especially tropical storms, which interest him greatly. He makes himself available as a consulting weatherman to friends and colleagues who want him to determine a sunshine-blessed date for an outdoor wedding or to help schedule a vacation-sans-raincoat in a far-off country. In addition, throughout the year he leads K-12 students and teachers from local schools on atmospheric science tours that include a visit to his rooftop weather station and an introduction to the basics of meteorology.

Murakami also likes to keep an eye out for interesting weather patterns that faculty can cite in their atmospheric and oceanic sciences classes. His computer desktop sports a dramatic image of one such pattern he spotted and collected data on — an instance of two tornadoes that were born out of the same storm.

L.A. weather has recently provided examples of how some things simply defy prediction — like the thunderstorms and dangerous lightning that prompted local authorities to close down beaches twice this summer.

“While forecasters can predict when conditions favor thunderstorms over a region, it's nearly impossible to precisely predict where or when lightning may happen,” Murakamki said. All too often, he added, “observing the first bolt is your initial warning.”