Catalina eddy? June gloom? Santa Ana winds?  We’ve all heard terms like these in L.A.-area weather forecasts, but do we actually know what they mean?

UCLA staff meteorologist James Murakami, profiled in the UCLA Newsroom story, He's been UCLA's weatherman — rain or shine for three decades — helps us out with this glossary of common weather terms:

Atmospheric river
A conveyor belt, in effect, for water vapor flowing from the tropics. Excessively high precipitation occurs when large-scale storms tap into these rivers. An atmospheric river originating near the Hawaiian Islands is known as the "Pineapple Express" or "Pineapple Connection."

Catalina eddy/coastal eddy
Low-level wind that circulates over coastal waters is called a coastal eddy. The phenomenon gets dubbed a "Catalina eddy" when its center occurs near Santa Catalina Island. A Catalina eddy can influence the character of marine layer clouds throughout the area. 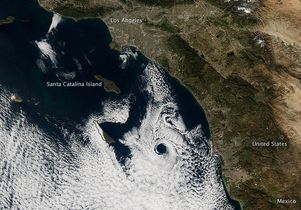 A Catalina eddy spotted from space by NASA's Aqua satellite on Feb. 17, 2013.

El Niño/ La Niña
El Niño is an ocean phenomenon where tropical waters west of South America are warmer than normal for several months — typically at their warmest when winter is starting in the northern hemisphere — and influencing the wind-flow pattern around the world. In Southern California, a west-to-east-oriented jet stream, which guides winds in large-scale storms, ends up passing through more often than normal in winter. This can result in a wetter-than-usual winter — but not always.

La Niña is a similar phenomenon, but it occurs when tropical waters west of South America are colder than usual, typically at their coldest at the start of Southern California winters. La Niña can lead to a drier winter, but not always.

Front
The boundary between two air masses of different temperatures and densities, both of them in motion and affecting each other. All fronts are capable of producing inclement weather. A cold front is one where a mass of cold air is displacing a mass of warmer air. In a warm front, warm air is displacing colder air.  An occluded front occurs when cold air displaces warmer air above it. A stationary front shows little motion.

Humidity (relative humidity)
A percentage measure of how saturated with water vapor the air is for a given temperature. A low percentage of humidity is associated with dry air, while a high percentage makes for moist air. 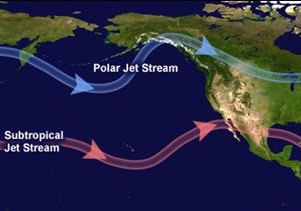 NASA
An illustration of the polar and subtropical jet streams.

Inversion layer
A layer of air that is warmer — and usually drier — than the air mass that lies below it. Southern California’s cool marine layers are always capped by an inversion layer.

Jet stream
A narrow band of strong winds — jet streams passing over California can exceed speeds of 150 miles per hour — occurring at altitudes several miles above the Earth and capable of having a large impact on weather. The polar jet stream guides the forward motion of large-scale storms and influences storm strength. The sub-tropical jet stream can be a source of upper-level moisture for storms.

June gloom
A southern California term used to describe persistent, low clouds along the coast, commonly occurring in late spring — called “May Gray” during the month of May — and early summer. The phenomenon occurs when the marine layer is dense enough for low clouds to produce early-morning mist or drizzle.

Marine layer
A layer of cool, moist air that that originates from a large body of water — the Pacific Ocean, for instance — and makes contact with the ground. It is capped by a layer of warm, dry air. The more moist a marine layer is, the more likely clouds and fog accompany it. 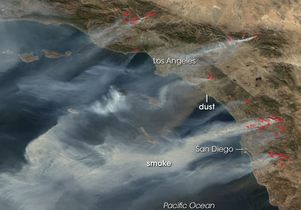 Santa Ana winds
A type of off-shore flow, Santa Ana winds occur when surface high pressure over the Great Basin states — most of Nevada and parts of Utah, Oregon, Idaho and California — induces persistent and sometimes strong winds from the northeast to flow over parts of Southern California. Santa Ana winds are dry and usually produce warmer than normal weather in our region, usually during the autumn and winter months.The winds also pose the danger of spreading wildfires.

Southwest monsoon
A summer wind-flow pattern where air with high water vapor content — coming from the Gulf of Mexico, the Gulf of California or the tropical Pacific south of mainland Mexico — reaches the desert Southwest and may even briefly extend to the California coast. A southwest monsoon results in scattered showers and thunderstorms.

Sundowner winds
A type of off-shore flow pattern that occurs in coastal Santa Barbara County when strong winds from the northwest or north occur, producing a brief period of significantly warm, dry weather. These winds typically occur during late-afternoon or early-evening hours — hence the name “sundowner.”