The news Jeannie Malabanan received last January was devastating. Following a year of difficult and aggressive chemotherapy for a rare bone tumor, the cancer at the base of her daughter Ashlee’s spine had metastasized to her brain. After a recurrence of her symptoms, Ashlee began to have seizures and was re-hospitalized at UCLA.

That’s when the Children’s Pain and Comfort Care (CPCC) team was called in to assist. “They talked to us and supported us, and provided Ashlee with as much quality care as was possible during this end-stage of her life,” Malabanan said. “Basically, they helped our family to process and survive this ordeal.”

Ashlee decided to forego further treatment and to stay in the hospital. “It was a hard choice for us to accept — as a parent, you want to keep your child alive for as long as you can,” her mother said. “But I know keeping Ashlee alive was not what she wanted. She didn’t want to just be breathing and not have any quality of life.” 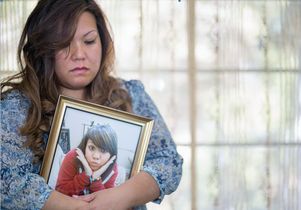 Ann Johansson/U Magazine
Jeannie Malabanan hugs a protrait of her daughter Ashlee, who died this year of cancer.

During the two weeks when Ashlee was hospitalized, the CPCC team worked with her primary medical team and others to provide whatever assistance was possible. “They came by regularly to make sure her last days were as comfortable as possible as she fell deeper into her terminal illness,” Malabanan recalled. “They let us know that we were not alone and that if we wanted them, they would be with us every step of the way.”

The Chase Child Life Program of Mattel Children’s Hospital UCLA created a plaque with Ashlee’s palm print, and the CPCC team had her fingerprint replicated on more than a dozen pendants for family members to wear. When Ashlee lost consciousness, her wishes were known. Arrangements were made so that family members could stay with her; they never left Ashlee’s side until the end. She was 21 years old when she died.

Since it was established in 2008, UCLA’s CPCC program in Mattel Children’s Hospital UCLA has worked to succor pediatric, adolescent and young-adult patients like Ashlee in their days of need and to help their families grapple with the unfathomable: the death of a child. While the broad-based CPCC team includes a psychologist, three physicians, nurse practitioner, a social worker bereavement coordinator and chaplain, among others, the frontline clinical-service team, including physicians and nurse practitioner, sees some 200 patients a year in the hospital setting and another 325 patients through its outpatient clinic.

Taking an interdisciplinary approach to address the core goals of care decisions, pain and symptom management and bereavement support, the team has a mission to enhance the comfort and quality of life for children with complex medical conditions and for their families. They work to relieve symptoms of disease or its treatment and to address psychological, social and spiritual needs.

Said Malabanan: “That extra support and compassion is amazing. I’m so grateful that they were there for Ashlee and for us.”

While many hospitals have adult palliative-care and pain-management units, few have pediatric-palliative and pain-management teams to care for young patients and the members of their families. Although the number of centers with such programs has been growing, many medical professionals believe it is not happening fast enough.

“In the year 2014, pain management for children in the United States remains abysmal,” said Dr. Stefan J. Friedrichsdorf, a pioneer in the field and medical director for one of the largest pediatric palliative-care programs in the country, at Children’s Hospitals and Clinics of Minnesota. “And the younger the child is, the less likely it is that the child gets appropriate pain medication.”

From the moment the CPCC team is consulted, members will start reviewing a patient’s entire medical history to know precisely what the patient has gone through and make recommendations to the child’s primary physician group on medication adjustments that can greatly ease a child’s symptoms and his or her pain.

UCLA’s team works closely with all facets of the health care community, including child life, social workers, spiritual care as well as all medical departments, from anesthesiology to transplant services.

“This team is invaluable,” Dr. Neil Wenger, director of the UCLA Health Ethics Center and chair of the ethics committee for the Reagan UCLA Medical Center. “They are able to pull everyone together to focus on reaching the best clinical outcome that can be achieved and also to ensure that the family remains intact while reducing the suffering and preserving the dignity of their child.”

Team members stress that a CPCC referral is not a hospice referral, although transitioning to hospice care is an option with which the team will assist, if needed. In some instances, consultation with the CPCC is automatic. Such automatic consultation recently was implemented by UCLA’s pediatric bone-marrow-transplant unit for all of its patients. Children who need a bone-marrow transplant are at significant risk and often have distressing symptoms. The CPCC team is able to assess the best medication approaches and recommend strategies such as massage or other non-medical soothing therapies.

If a child should die, the family’s relationship with the CPCC continues beyond the child’s death. Team members remain on-call to families and help connect them with local services to aid in bereavement. For example, any parent or sibling of a UCLA pediatric patient who has died can attend the Comforting Hearts Family Bereavement Group.

The group, which is supported by a grant from the Ralph M. Parsons Foundation and other sources, meets twice a month at a church in Westwood. Social worker Gina Kornfeind, CPCC’s support and bereavement coordinator, along with volunteer social workers and community volunteers, leads two sessions — one geared for parents and one for siblings.

For parents, discussions center around issues such as how to deal with work again, interact with friends and handle holidays, relatives or traveling — everything that is the “new normal,” Kornfeind said. That includes navigating difficult questions such as: How many kids do I say I have now? What about the possibility of having another child in the future?

For siblings, the support group includes sharing, as well as arts, crafts and music. “The idea is for them to build trust and a sense of support with the staff and with one another, to feel connected with other kids who are also grieving, to learn how to cope with this loss, and also to have some normal fun and camaraderie again,” Kornfeind said.

Ashlee Malabanan’s mother attends the meetings regularly. “It gives us a place where we talk about the way we feel and understand that each of us has been there,” Jeannie Malabanan said. “We can talk to other people in our lives about our feelings and experiences, but they really don’t get it because they haven’t been there. So this makes a huge difference. It’s a safe place for us to talk about how much it hurts and how we deal with it every day.”

Two months before she died, Ashlee, unbeknown to her family, created a website to raise money for her care, thinking she would need additional funds. In a short time, she had raised $8,000; her mother has donated the funds to help expand the bereavement program. “No family should be alone while processing the end of life of their child,” Malabanan said.

This story was adapted from a longer version that is published in U Magazine. Read the entire story here.