It all began with some citrus fruit.

“I fell in love with the artwork that went into it,” said Jessica, whose last name is being withheld because she has been in the foster care system for the past two and half years. “That very day I begged my uncle to take me to Walmart so I could buy clay.”

Now, before she starts her sophomore year at the Los Angeles Unified School District’s Innovative Cinematic Arts and Music Production Magnet School, known as iCamp, where she studies film and dreams of becoming an animator, Jessica is getting ready to spend two weeks as a participant in the UCLA School of Theater, Film and Television’s Pre-College Film & Television Summer Institute, learning all about stop-motion animation.

For Jessica, who lives in a three-bedroom house in South Los Angeles with her five siblings, attending the institute is an opportunity that wouldn’t have been possible were it not for the full scholarship she received from The Nicholas Endowment.

“I needed someone to pour cold water on me to make sure I wasn’t dreaming,” Jessica said of her reaction after finding out she was receiving a scholarship.

The endowment gave UCLA TFT $40,000 in scholarship funding this year for talented underserved/underrepresented high school students to attend the school’s programs, which includes the Theater Pre-College Summer Institutes. They began in late June and continue through mid-September.

“For us at the endowment, it’s an honor to help provide assistance,” said Dan Stetson, trustee and executive director of The Nicholas Endowment.

“Helping underserved students is important to us because in these stressful times, they are the first to suffer the most,” says Dr. Jon Kaswick, president of the Gluck Foundation.

According to Film & Television Summer Institute director Christina Carrea, the support from both the endowment and the foundation has been a game changer.

“Historically, only students who are able to pay the program fees upfront have had access to our programs, and this can limit our applicant pool and make it out of reach for some talented students, because they cost between $2,500 and $6,000,” she said. “Now, it’s a different story. We’re hearing from underrepresented groups, which is exciting because they’re important voices in storytelling. We have students who would not, by any stretch of the imagination, have been able to come if not for the scholarships.” 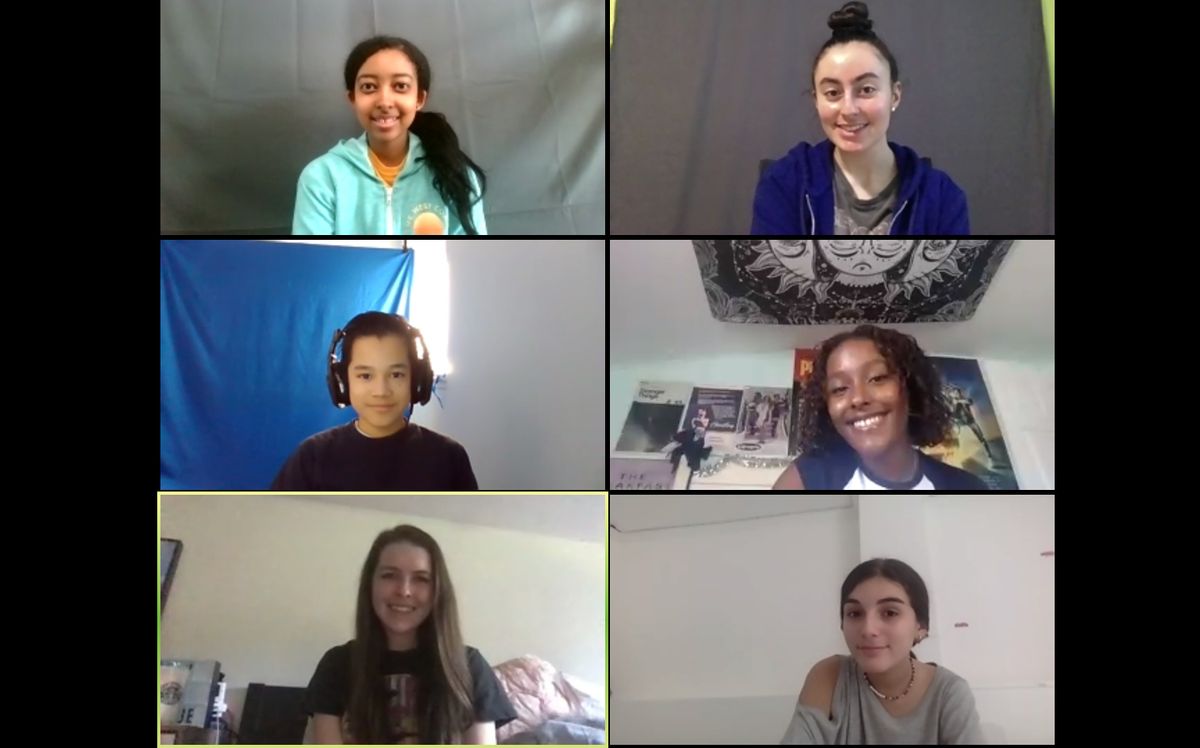 UCLA
Students in the Acting for the Camera Summer Institute count scene study, voice for the actor, and screenwriting among their classes.

Thanks to COVID-19, things are a little different right now, of course. Under normal circumstances, the Summer Institutes would take place at UCLA; Jessica would make the 15-mile trip to Westwood to live on campus while taking part in her program, which begins in early August. But since the pandemic has caused everything to pivot, she will instead participate in classes led by UCLA TFT faculty via Zoom and produce her coursework at home on the new laptop she has been given, which was part of her scholarship package.

“At home, there’s only one computer for everyone to share, so she doesn’t have reliable use of it for her studies,” said Carrea, who arranged the purchase. “She needed one of her own.”

Similarly, other Nicholas Scholars who don’t have the necessary tools to complete their work remotely are being given mics, tablets, backdrops, ring lights, webcams, tripods, film slates, camera lenses and more to facilitate their success.

The programs, ranging from one to three weeks in duration and covering 11 subject areas, from acting for the camera and musical theater to digital filmmaking and writing for TV, are every bit as rigorous as any college course taught during the academic year.

“They’re not summer camps by any means,” says Carrea. “They require your full attention.” They challenge and creatively inspire students, introducing them to and preparing them for collegiate life, and come with college credit. The fact that students are being taught remotely this time around hasn’t changed any of that.

Dolann Adams, the theater department’s director of summer programs, said that students currently enrolled in the acting for the camera, musical theater and acting and performance institutes are as physically active as they would have been on campus.

“They start their mornings with tai chi, which corresponds with what is required of the UCLA TFT theater undergrads,” she says. “Their workload includes on-camera, scene study, singing, ballet, voice for the actor and screenwriting classes, as well as workshops facilitated by practitioners in entertainment, such as casting, voice-over and hip-hop, to name a few. Students also have the opportunity to engage and ask questions with well-respected artists through industry panels.”

Ava Snow, a high school sophomore from Salt Lake City, Utah, recalled the new eight-day cinematography program she participated in earlier this summer. “There was class all day and then a lot of assignments at night,” she said. “It was challenging but I really liked it because I’m passionate about film. It was a great opportunity to learn so much in such a short amount of time.”

Carrea hopes that things will go back to normal next year and that the scholarships will continue to be made available because she sees great worth in them that goes beyond monetary value.

“When you talk to disadvantaged students about going to college, that’s not a real thing for them,” Carrea says. “They aren’t in an economic position to think that’s tangible. Giving this encouragement, showing them that we foster safe and supportive environments for students of all cultural backgrounds, and that yes, they can take a class at UCLA, is broadening their view of what is possible in their lives.”

Editor’s note: This story was updated Jan. 3, 2022, to correct the name of the person in one of the photos.