Then the team's coaches revealed how the Bruins earned this stunning victory. Halfway through the NCAA team final, UCLA was trailing Oklahoma, LSU and Florida, and UCLA head coach Valorie Kondos Field said, although she did not know it at the time, the Bruins had less than a three percent chance of winning. “The student-athletes from all six teams in the finals “all brought their ‘A’ games,” she said at Monday's rally. 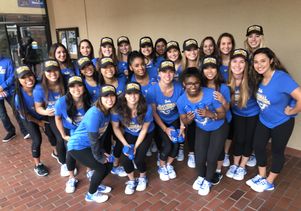 During a break in the locker room, associate head coach Chris Waller screamed, “For 365 days, we’ve trained to be champions! We never, ever quit! Are you in?!” The team said yes and then went out to compete on uneven bars.

Senior JaNay Honest scored an impressive 9.9, sophomore Madison Kocian scored a 9.9375, and senior Christine PengPeng Lee scored a perfect 10. Sophomore Kyla Ross held her handstand for so long, Kondos Field said, that Ross could have taken a coffee break before resuming her 9.95 performance, giving the Bruins a season-high score of 49.6375 on bars.

Even so, heading into the final event, balance beam, “I thought we were playing for third,” the coach admitted.

Redshirt freshman Grace Glenn led off with a 9.9375 on the beam. Katelyn Ohashi scored 9.95, and Ross a 9.9875. When Lee scored her second perfect 10 of the night, UCLA had won its seventh NCAA team gymnastics championship under the coach they call "Miss Val."

“From there, it’s just been a blur,” said Kondos Field.

At Monday's celebration, Lee said she loves everyone on the team, and said her reaction to coach Waller’s speech, before scoring her two perfect 10s, was, “Why don’t we make the most of this and have some fun!”

Among those at the celebration were numerous Bruin student-athletes from other sports and Danusia Francis, the 2016 NCAA balance beam champion and a six-time gymnastics All-American, who flew in from London. Kondos Field said during the celebration that Francis' spectacular performances on the team led to a doubling of the number of gymnastics fans in Pauley Pavilion.