In Ann Carlson’s world, gesture — even the most mundane movement — is synonymous with dance. For almost a year, Carlson has been at UCLA observing and “collecting” the gestures of more than 100 students and employees at work across the campus. This is part of her process towards creating “The Symphonic Body UCLA,” a performance built entirely from these gestures.

Carlson is an award-winning artist who has been in residence at the Center for the Art of Performance at UCLA (CAP UCLA) as well as guest faculty in the UCLA Department of World Arts and Cultures/Dance for the past year. Carlson serves as choreographer and conductor of this unique “orchestra,” made up of students, athletes, professors, drummers, designers, administrative staff from multiple departments, facilities workers, researchers, vice chancellors, coaches, librarians and more. 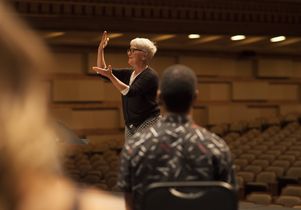 Instead of instruments, this orchestra is comprised of individual “gestural portraits”—personal movement vocabularies created for each performer — based on Carlson’s observations of their everyday movements.

The impetus that drives “The Symphonic Body” is what Carlson calls “the movement of the movement itself.”

“The Symphonic Body performance traces a gesture from its functional utility to its abstraction, from the real to the symbolic, right before our eyes,” she explained.

This is something that Carlson, an unconventional performance creator, has explored often in her career. The seeds of “The Symphonic Body” were planted in the 1980s, when Carlson took up residence in an extremely unlikely dance environment — the offices of four young lawyers in New York. In 1986, she created a performance work that grew organically out of their workday movements, titled “Sloss, Kerr, Rosenberg & Moore.” Those lawyers, by the way, are still performing the piece more than 25 years later.

As a large-scale, site-specific work, “The Symphonic Body” has taken place just once before — in May 2013 at Stanford University — after Carlson had spent a similar amount of time on that campus, observing and creating portraits of those workers.

“The Symphonic Body” project is what Carlson calls a “social sculpture,” bringing a segment of the UCLA community together through the lens of inspiration. The participants are identified and recruited by asking others to name people who inspire them on campus.

Carlson began with one participant, Meryl Friedman, director of education and community initiatives at CAP UCLA. She observed Friedman’s daily activities for several days and took extensive notes on the repetitive and idiosyncratic movements from her work life. Carlson then created a series of movements based on Friedman’s personal physical vocabulary and returned it to her in a sequence, which, when performed by Friedman, becomes a dance.

Carlson then asked Friedman for a list of people on campus who have inspired her. Carlson reached out to those suggested individuals and repeated the process to build a still-growing cast of nearly 100 performers. Among them are UCLA Vice Chancellor of External Affairs Rhea Turteltaub, Vice Chancellor and Chief Financial Officer Steve Olsen, professor of physics and astronomy Andrea Ghez, neurology researcher Noriko Ito, Director of Digital Humanities Annelie Rugg, the entire women’s gymnastics team and many more, representing a broad cross section of the people who study and work on campus.

Friedman said she was initially nervous that Carlson was going to create a dance out of her body language.

Guts and brains: How microbes in a mother’s intestines affect fetal neurodevelopment