This year, GQ called downtown Los Angeles “America’s next great city” and “the cool capital of America.”  The New York Times included downtown on its list of “52 Places to Go in 2014.” At a “Thinking L.A.” event copresented by UCLA and Zocalo Public Square at the Museum of Contemporary Art, Grand Avenue, a panel of people who have developed, designed, lived, worked and played downtown discussed whether downtown actually lives up to this (admittedly East Coast) hype.

Award-winning architect and UCLA professor Thom Mayne cautioned against the hype. The notion of “downtown,” he said “is already a misnomer” for Los Angeles, a county of many different cities and more than 10 million people. “‘Downtown,’ as a word, connotes a singular,” said Mayne, pointing to what the word means in cities like Kansas City, Cleveland and Chicago. But in L.A., downtown is just one of a number of downtowns. 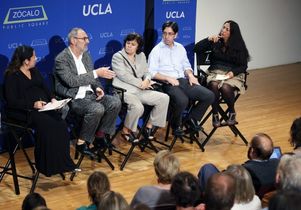 Los Angeles Times arts and entertainment editor Laurie Ochoa disagreed. Yes, L.A. has a lot of neighborhoods and tribes; she recalled that when the L.A. Weekly’s offices moved from Hollywood to Culver City, her colleagues “were tearing their hair out” over the identity crisis of becoming Westsiders. “To me, it’s one city,” she said. L.A. is united by its theaters, restaurants, its people. And downtown has long been a cultural hub, she said. Before there was Disney Hall, there was the Music Center.

Mayne recalled that for a long time, he lived in Venice and never went downtown. Crossing the 405 was like getting through the DMZ in Korea.

Ochoa again disagreed: Downtown’s not “suddenly interesting,” she said. “It’s always been interesting.” For a long time, only a certain kind of person lived downtown. Now it's a destination for all sorts of people.

UCLA urban planning professor Anastasia Loukaitou-Sideris said that success is having people live, work and play downtown — transforming it into a place with life on the weekends and after-work hours. Great cities have great downtowns, she said. Downtown is the symbolic heart of Los Angeles, which is why its success is so meaningful.

Downtown is just one of the hearts of L.A., Mayne added. “I think it can be absolutely successful without being dominant.”

Who exactly are the people living and playing downtown? Medina asked restaurateur Bill Chait, who owns businesses across the city, if he notices a difference between customers at his downtown restaurants versus his Westside restaurants.

His downtown clientele is “incredibly eclectic,” said Chait. They’re younger, more urban and mobile. Chait, who grew up on the Westside, recalled that he resisted opening restaurants downtown for years. It was strictly a daytime environment, he said. There wasn’t enough of a residential population to sustain a restaurant, he thought at the time. In 2009, however, he opened up Rivera near the new L.A. Live complex, and other restaurants followed.

Over the past five years, downtown has become a center for people across the eastern part of Los Angeles, said Chait. Yet for all its architectural glory, noted Mayne, there was not a soul on foot on Grand Avenue at 7 p.m.

Loukaitou-Sideris said that architecture remains a hurdle for downtown. There’s been an emphasis on creating architectural masterpieces, but not on what’s happening on the street. The buildings and streets “don’t talk to one another” or link to one another, said the urban planning professor.

One of Medina’s favorite places downtown is Grand Central Market, which also epitomizes downtown’s current transition. At Grand Central, she said, you can pay $6 for a latte or $6 for a dinner, including a beer. How can downtown deal with the tension between preservation and creation?

Chait said that a lot of downtown development is going in the right direction because more people and builders are reclaiming rather than knocking down and rebuilding.

The challenge also lies in preserving downtown’s social diversity, said Loukaitou-Sideris, making sure it doesn’t turn into another Westside.

However, Mayne said that changing the perception of downtown has to start on the upper end. If wealthy people come into the area, everyone else will follow. Building low-income housing is the last thing you do — not the starting point, he said.

Ochoa said a flow between high and low was needed, illustrated by the availability of expensive coffee and $2 gorditas at Grand Central Market, and the skateboarders at the Caltrans building Mayne designed on Main Street.

Chait said that downtown’s evolution is being driven by renters rather than by super-wealthy buyers. You’re never going to gentrify all of downtown, he said. The challenge is to create housing for the people who already live there instead of relocating them.

At what point, asked Medina, will downtown start attracting people over age 45?

It already is, said Chait — at least to eat. On a Saturday night at his restaurant Bestia in the arts district, there’s a moment when you’ll see people from the Westside: right before dark.

The balance of political power is shifting, said the panelists, pointing to Los Angeles City Councilman Jose Huizar, who represents downtown and has a great deal of clout, particularly when it comes to urban planning.

In the question-and-answer session, an audience member asked the panel what can be done to make downtown feel safer.

Loukaitou-Sideris said that vibrant, more populated streets mean fewer opportunities for crime. She did a study of bus stops around L.A. and found that the 10 most dangerous stops were downtown — and they were often just a few feet away from stops on the same line with no crime. An open storefront adjacent to the stop versus an empty lot made all the difference, she said.

Another audience member asked the panelists to weigh in on downtown’s Grand Park. It feels “kind of one-dimensional,” the individual said. Is it going to be a truly great, central public space?

It’s not finished yet, said Ochoa, who was echoed by Loukaitou-Sideris.

“Give it a few years,” said Loukaitou-Sideris. It’s still quite sterile, but people — rather than design and planning — may change it.