Monks in Byzantium said it was the gently pulsing rhythms, uplifting melodies and resonating harmonies of liturgical chants floating through the corridors, sanctuaries and domes of their brick and stone churches.

But in 2015, with advanced recording and acoustic measuring technology now available, what do we really mean by angelic sounds? UCLA Byzantine art history and archaeology professor Sharon Gerstel and a multidisciplinary, international team of scholars have devoted much of the last year trying to find that out.

“We wanted the best scientific testing possible to understand what it meant when the Byzantines said, ‘It sounds like there are angels in the buildings,’” Gerstel said.

So Gerstel and a team that included an audio and acoustics professor from USC, a recording engineer, an archaeologist, an architectural historian and a musicologist who specializes in transcriptions of 14th-century Byzantine music spent two weeks in northern Greece last summer trying to capture the ethereal.

The 14th century was significant to the team’s work for several reasons: It marked the end of a five-centuries-long period when Byzantine churches were shrinking in size. In that time period, the paintings and mosaics in these churches depicted the singers as well as the lyrics of the chants. And the music in Byzantium changed into a form called kalophonic (beautiful voice), putting the emphasis on soloists who would riff on the music and create beautiful melodies. 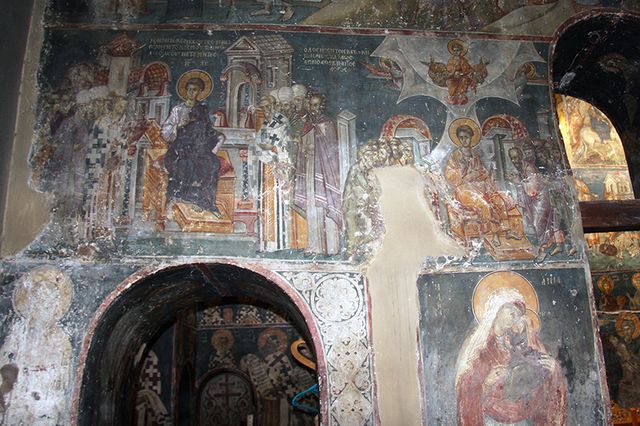 Sharon Gerstel/UCLA
The “sound portal” through which the Akathistos Hymn emanated, as if amplified by a microphone. Above the portal is a 14th-century representation of the hymn, with images of chanters.

Previously, scholars had said the move to build smaller churches was the result of congregations or monastic communities getting smaller, Gerstel said. But with artwork incorporating inscriptions from hymns and depicting figures gesturing to one another from opposite walls in churches as if they were conversing, Gerstel posited another theory: These new churches were designed to be smaller — and even decorated differently — to enhance the performance of the chants.

To test Gerstel’s theory, the team spent hours every day measuring acoustical characteristics and recording performances of period liturgical music in nine churches in Thessaloniki, Greece, which was the second capital of the Byzantine Empire and where Gerstel studied at Aristotle University years ago. These churches have remained architecturally unchanged for hundreds of years and still have original paintings and mosaics on the walls. 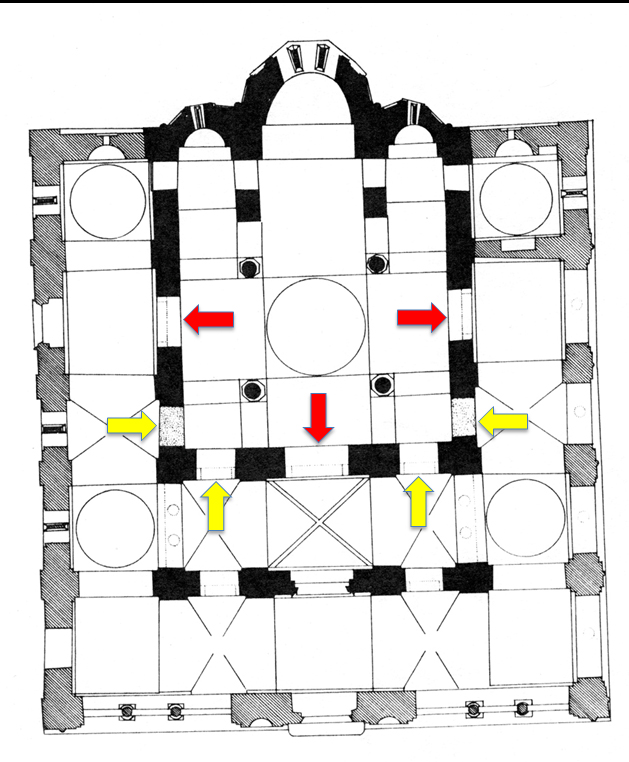 Sharon Gerstel/UCLA
In this floor plan of Holy Apostles Church, the red arrows indicate the original entrances to the nave, and the yellow arrows indicate doors that were cut through the walls, substantially changing the acoustics of the building.

In the church of St. Nicholas Orphanos, for example, the words of a hymn and chanters are depicted on the wall above a portal outside the central nave of the church. Gerstel said that she thought the placement of the painting was to signify where chanters were meant to stand when they performed.

To test her intuition, the team had a single chanter stand at the threshold of the opening to the sanctuary facing east, while Gerstel stood below the image of the chanters.

“The sound rolled out through the portal as if through a microphone,” Gerstel said, “as if the monks [in the painting] were singing.”

Every time the chanters performed, Gerstel said, the results were startling. The reverberating harmonies of liturgical chanting washed over them. Even when watching videos of the performances, each singer’s individual vocal part still cuts through clearly enough to be heard, almost as if a listener were to simultaneously look at a tapestry and its individual fibers.

“So when you stand in a church, you feel as if you’re penetrated by the sound and at the same time, you’re looking at the wall seeing these figures that appear to be moving,” Gerstel said. “You’re not standing there listening, you’re enveloped.”

During the testing, Gerstel and others noticed that the chanters subtly changed the tempo of the music based on the reverberation of the sound. “If they’re in a highly reverberant space they will slow down the chant so that they hear it coming around,” she said. “Rather than overlaying their voices, they wait for the voice to come back. That also is a kind of responsive singing that we’re just not attuned to.”

How the team came together is a story in itself.

Two years ago Gerstel was at a conference presenting a paper on images of sound. Over lunch, her UCLA colleague Abeer Alwan told her about Chris Kyriakakis, a professor of electrical engineering at USC, who had just been the subject of a piece in The New York Times.

“I just cold-called him and said, ‘I’m working on this project in Thessaloniki, and would you be interested in collaborating?” Gerstel recounted. “He said, ‘Thessaloniki — that’s my home town where my mother lives.’” Kyriakakis joined with Gerstel as the co-primary investigator, forging a close collaboration between professors at UCLA and USC. 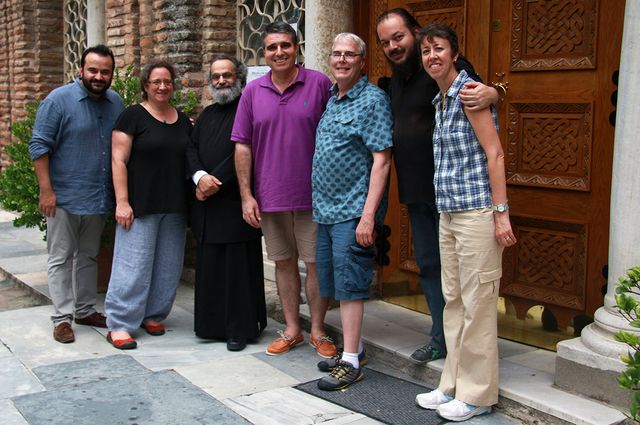 From there, the team grew to include James Donahue, a professor of music production and engineering at the Berklee College of Music and a recording engineer for the Boston Philharmonic; Amy Papalexandrou, a professor of architectural history at Stockton College in New Jersey; Konstantinos Raptis, an archaeologist in Thessaloniki; and Spyridon Antonopoulos, a musicologist from City University London.

To conduct their research, the team needed the buy-in of local authorities, including the local bishop who agreed to close the churches for three hours each day so the researchers could work. They recorded audio and video of chanters as they sang, tested the acoustical responses in different areas, and even measured the interior temperature and size of chambers within the buildings.

And, of course, they needed chanters.

“The first day, a chanter named Nektarios Antoniou came and brought his father, Spyridon Antoniou, who is professor of Byzantine musicology at the School of Theology at Aristotle University,” Gerstel said. As testing proceeded, more monks joined in after learning about the project.  “They wanted to hear for themselves what it sounded like in the buildings. Of all the research projects I’ve done, it was the most exciting, most rewarding and instantly gratifying.”

Funding for last summer’s two-week visit came from a UCLA transdisciplinary seed grant. Gerstel said  she hopes to get additional funding to create a sound database for buildings; they’ve already been invited to conduct similar research in other areas in Greece.

“The Byzantines say that the churches are heaven on Earth. It’s become such a trope to hear that that we don’t even unpack that statement,” Gerstel said. “But when you return to the idea of the angels singing, and you hear the voices coming back at you without seeing the source, you really understand that they weren’t kidding.”