An Afro Latin jazz combo with brass and ancient Indigenous percussion, an orchestra with strings, winds, piano and harp, and a mariachi band all crowded onto the stage at UCLA’s Royce Hall. And as if that wasn’t enough, a human voice joined the instruments. Not just any voice — that of famed philosopher, intellectual and activist Cornel West. But instead of a cacophony of mismatched sounds, as one might expect, UCLA music students and the performers fused the different styles into a three-hour set of high-energy, harmonious bliss. 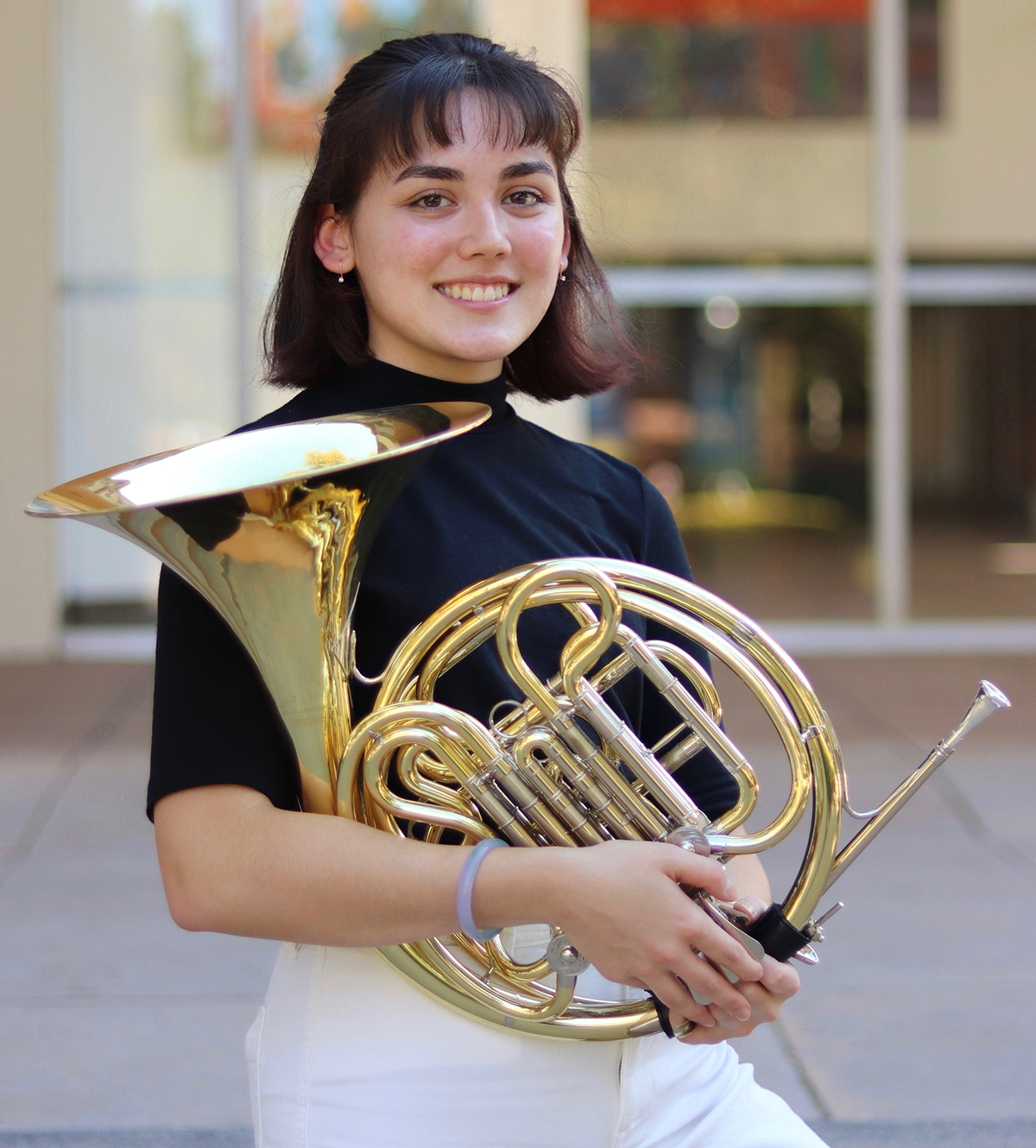 “It was one of the most unique experiences I’ve had as a music student at UCLA,” said Esther Myers, a third-year undergraduate horn major studying at the UCLA Herb Alpert School of Music. “We had just a few rehearsals, which added to the feeling this concert was going to be a hit-the-ground-running kind of explosive performance.

When West joined in with a spoken-word passage to accompany the titular song from “Four Questions,” the overlay of his narration with the orchestral music almost felt like slam poetry. He conducted the students with his words and hands — building crescendos, then waxing and waning — in sound and rhythm.

While the four questions he posed to the audience were the same as the original album recording, he improvised the rest, riffing off the student musicians’ and audience’s energy. He and O’Farrill put the four questions, originally penned by W.E.B. DuBois, in the context of today’s political turmoil.

UCLA Newsroom asked some of the student musicians to reflect on their opportunity to share the stage with West and the musical giants:

What was it like to work with Cornel West and Arturo O’Farrill?

It was a totally different dynamic having three different conductors on stage: Arturo leading the Afro-Latin Jazz Orchestra, Dr. Stulberg leading us in the Philharmonia, and Cornel West moving between the two groups and directing us intermittently. We knew it was up to us to listen to each other across the stage to sync up, and they added this risk-taking, spontaneous energy that helped us do that. 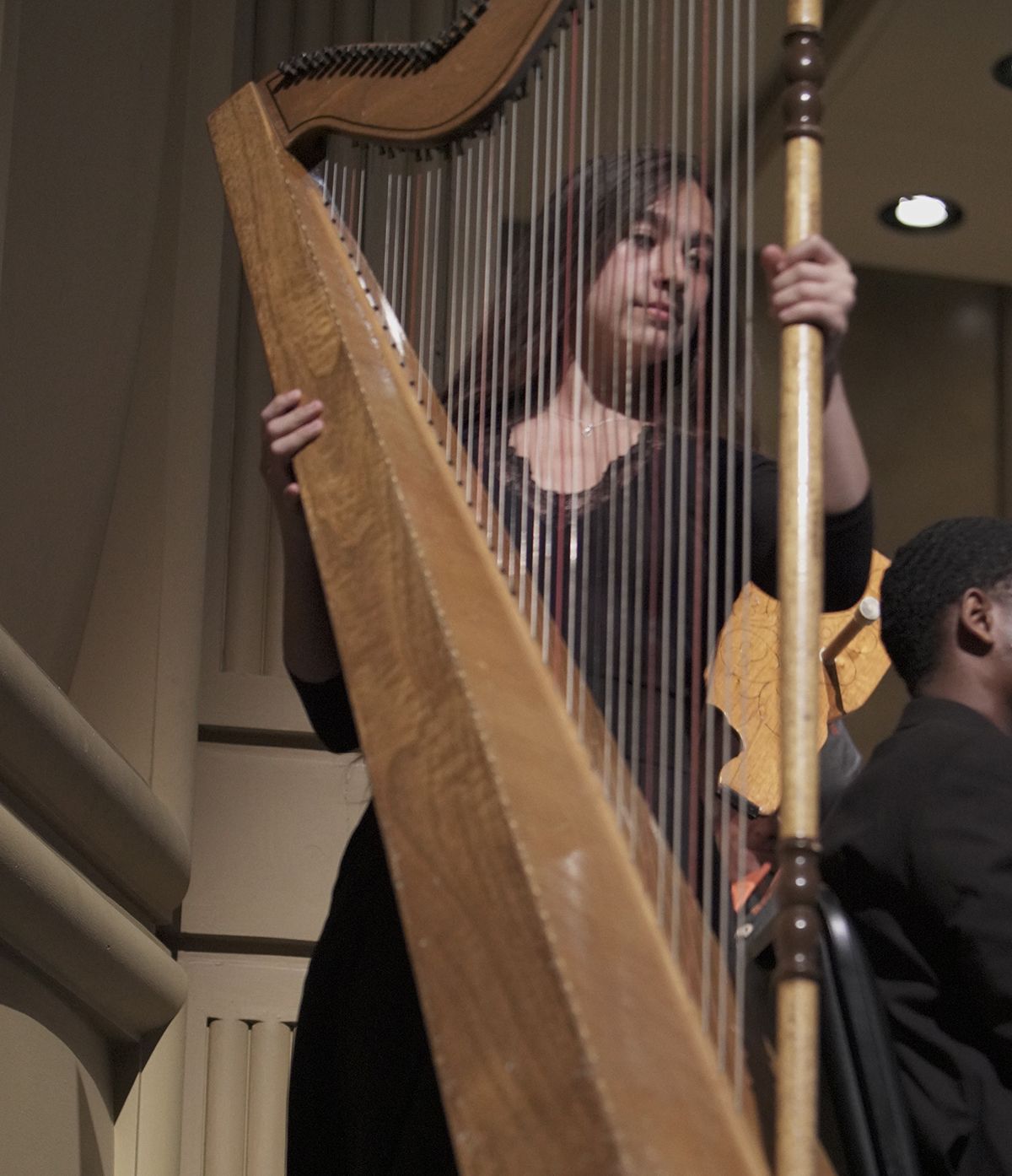 O’Farrill and West have said they relied on the energy of the moment for “Four Questions.” How did that influence the performance?

As a classical musician, most of the music I play relies on precise timekeeping and executing a phrase the same way, every time. In “Four Questions,” the first few bars are conducted by Cornel West, and he gave us the beats differently each time we played it. It was challenging, but this unpredictability gave it life, where a classical approach would have stifled the performance of the piece. I’m a French horn player, so there’s not a lot of repertoire outside of Western classical music that includes my instrument.

It was so powerful sharing the stage. Dr. West’s presence could be felt everywhere. I had the opportunity to be near the front of the stage, so I could hear his words intermingle with the music. Professor O’Farrill was out of my view, but it was still amazing being able to feel his energy, with his orchestra combined with Professor Stulberg’s direction for the UCLA Philharmonia.  Whether or not you play music, we all hear the same tones. It is really something special when a concert like this can be put together with so many different musicians from different backgrounds.

How did this concert stand out from other performances you’ve given at UCLA?

This was different from any other concert I have played altogether. Being able to play with the Afro-Latin Jazz Orchestra was an incredible experience that I hope to have again! I had the opportunity to play both the orchestral pedal harp parts as well as a Paraguayan harp with Mariachi Los Camperos. One of my professors is Professor Jésus “Chuy” Guzmán, who directs the UCLA mariachi group, Uclatlán. 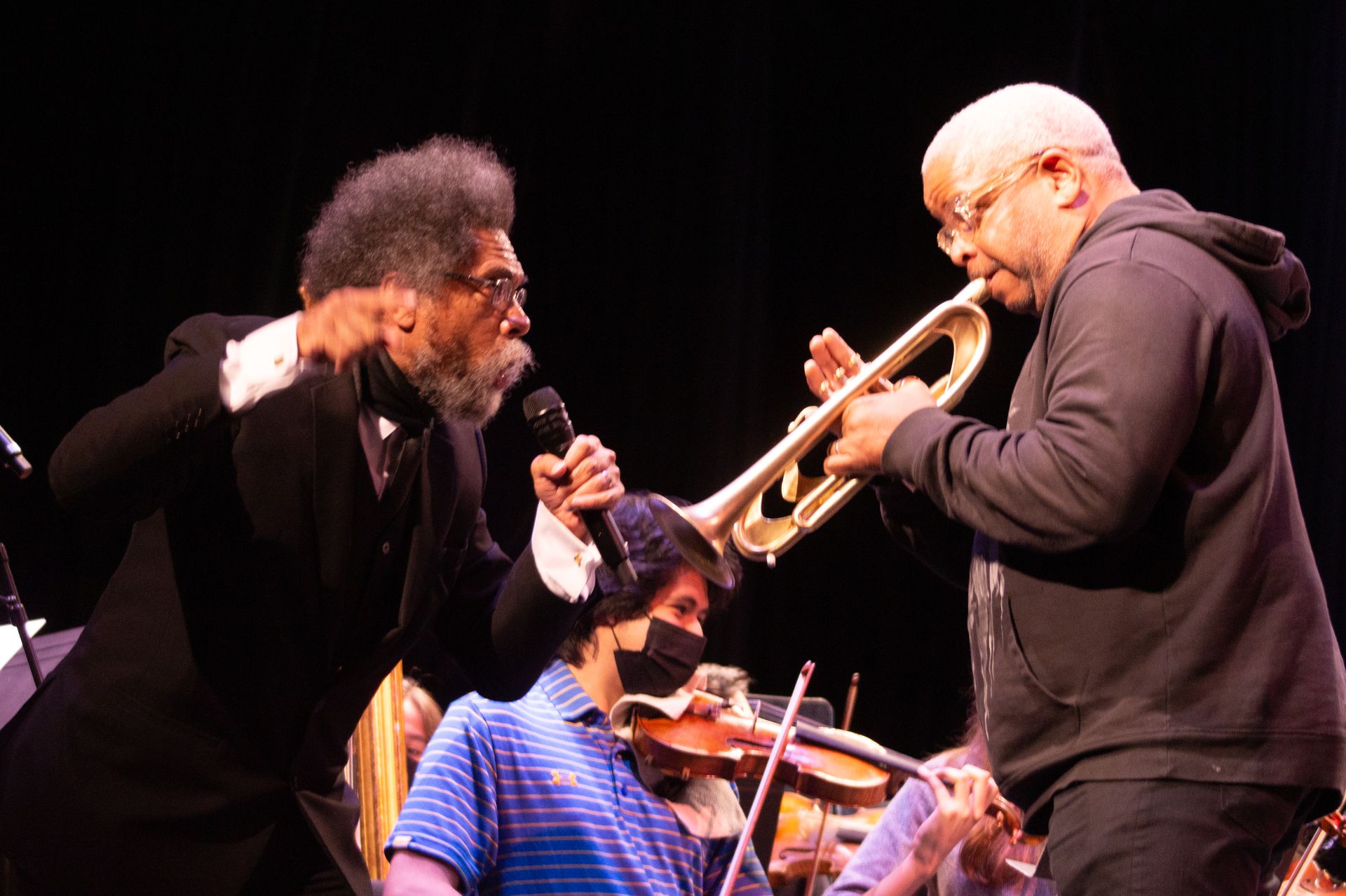 What was it like to work with West and O’Farrill?

The first rehearsal experience was electrifying, especially because of the energy and sound of the full orchestra with extended instruments plus the jazz band and “speaker/soloist” Cornel West. “Four Questions” was my second orchestral experience at UCLA with a narrator, but West was not just speaking or reading — he provided a musical concert through his words and was very active in his movements when he spoke, taking control of the entire stage. It was quite a unique piece with him as the “soloist” with a full orchestra and jazz band all on the same stage. The concert was the most eclectic program I have ever experienced.

How did your experience playing in the Mariachi de Uclatlán prepare you for this concert?

I joined the Mariachi de Uclatlán this quarter as part of fulfilling the upper division elective credit for my major. We practice under Jesús “Chuy” Guzmán, who is also the leader of the Mariachi Los Camperos (de Nati Cano), one of the best in the world. Being in Mariachi de Uclatlán has been a great experience so far, and it has deepened my appreciation for Mexican music and culture even more. Los Camperos had their own style and we had ours, and what resulted in blending both approaches to music was something great and memorable. 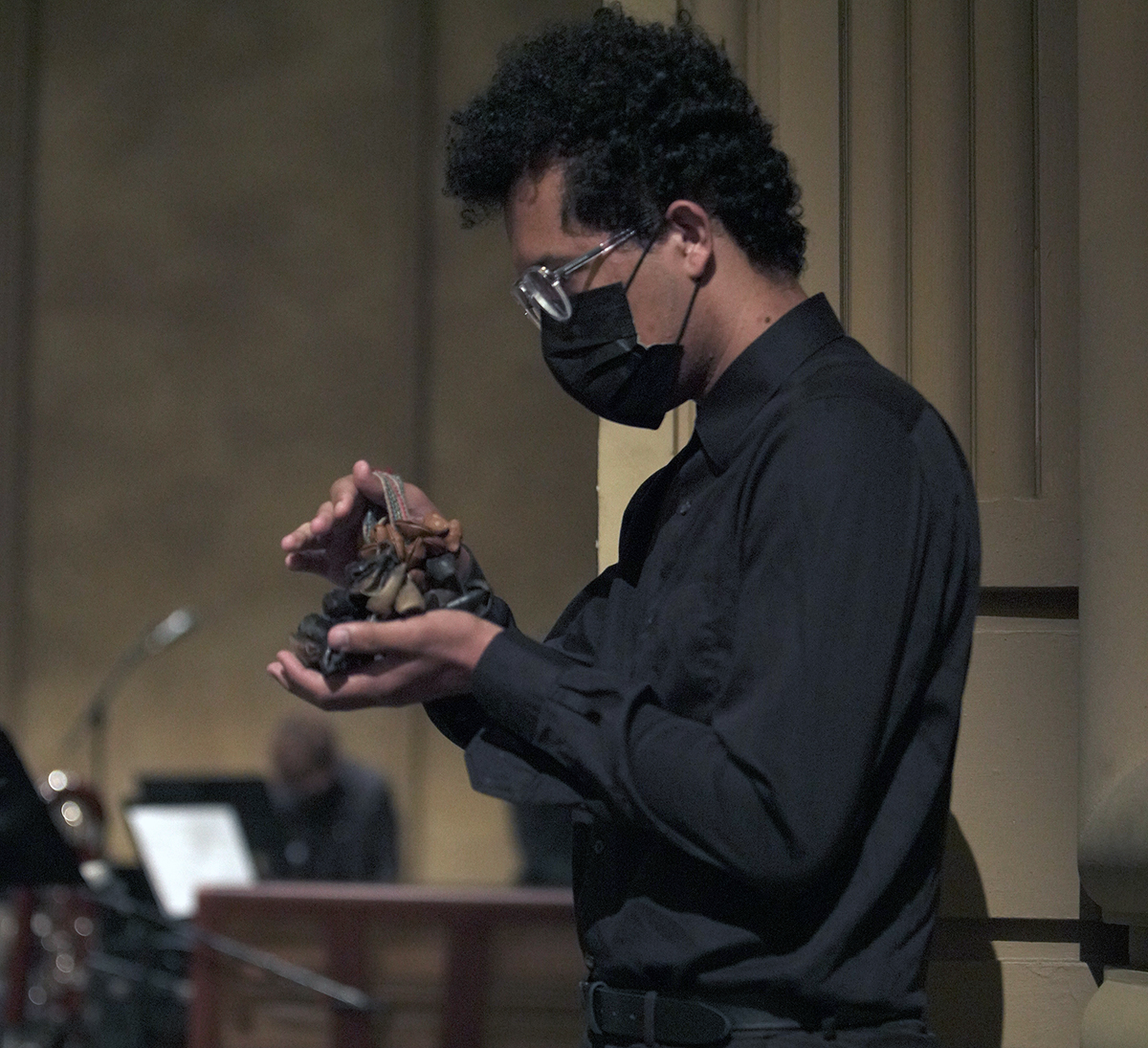 What was it like working with O’Farrill and West?

It was a very special, memorable experience to share the stage with them. I have never heard UCLA’s Philharmonia sound like that before, I have never heard a jazz composer with the imagination of Arturo before, and the interaction and community between the two ensembles, punctuated by the message of Dr. West, was great to witness. I remember the first day Arturo talked to us about the piece. He described being inspired by a speech Dr. West gave and imagining him as a soloist in a concerto context because his speaking style is so captivating and melodic.

What were some of the highlights from this experience?

For the opening piece, Carlos Chavez’s “Sinfonia India,” the composer notes he intended the music to be played with genuine Indigenous instruments from various tribes in the area of land we call Mexico, to create a blending of sounds of those and classical instruments. Luckily, the UCLA percussion section was able to learn how to play the Indigenous instruments properly from Chris Garcia, an expert in these instruments. More importantly, we learned about their historical and ceremonial context, and their use today.