Tucked into a light-industrial park on Western Avenue in Torrance, Monkish Brewing has been in operation since 2012. In addition to its 15-barrel brewing system and growing number of aging barrels for its Belgian-style beers, Monkish also has a tasting room — which this night has become a classroom.

The excursion to Monkish is the first of three site visits that are part of the inaugural “A Class of Beer: An Overview of the Craft Brewing Renaissance” course at UCLA Extension. Encompassing history, brewing techniques and business strategies, the class serves as an introduction to the craft beer movement for homebrewers, food-and-beverage professionals, or people who just like good beer. There will be samples later, but for most of the night, the students will focus on how that goodness gets made.

With gleaming fermentation vats and oak barrels looming behind him on the other side of a window, owner Henry Nguyen stands at the polished wood bar and dispenses hard-earned wisdom about the business — from the meaning of terms like “flocculation” and “attenuation,” to the drawbacks of using a distributor and the quirks of local zoning laws. Meanwhile, course instructor Tomm Carroll has the luxury of keeping largely silent.

Nguyen tells the 25 students about the circuitous path that brought him to his success running Monkish, one of L.A.’s increasing number of successful breweries. “People tell me I’m underweight both for being a brewer, and for being a Marine, but I’m both,” Nguyen jokes. After his stint in the Marine Corps, he studied divinity before moving on to brewing, first as a hobby, then as his business. (The name Monkish refers both to the Belgian tradition of monks brewing beer, and to his own background as a theologian.)

“Henry really is a wonderful brewer, and he was a teacher, so he knows how to keep people interested,” Carroll said later. He noted that Nguyen followed the number one unwritten rule of teaching about beer that night: “You don’t want to give people too much to drink before the end of the class.”

Though UCLA Extension has long offered a wine education and management certificate, the spring section of “A Class of Beer” is Extension’s first beer-focused course in nearly two decades. The class sold out — with a waiting list of 50 people. Another section is scheduled for summer quarter.

“There are homebrewers, people interested in starting breweries or beer bars, even people who are in wine distribution, who say, ‘I get wine, I don’t get beer,’” Carroll said. “And there are others who have said, ‘My friends and I go out, and when I look at all the different beers, I feel so lost; I just want to know something about it.’” 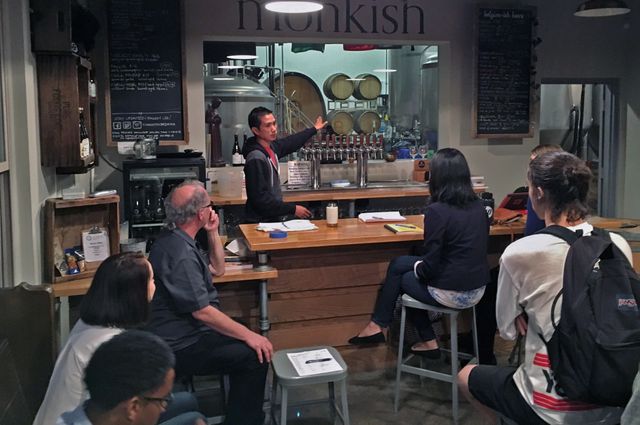 Ted B. Kissell/UCLA
Monkish Brewing owner Henry Nguyen imparts some beer wisdom to the students who visited as part of their class about beer.

Student Hannah Gustafson said she signed up for the class “to learn why I’ve been homebrewing such terrible beer.” Beyond that, she said that one of her favorite things about the class has been "getting to know fellow beer nerds."

That term would have meant little to the general public a couple of decades ago, but the late 20th century movement of independent breweries offering a diverse array of small-batch beers has picked up momentum. These days, catering to beer drinkers who can taste the difference between West Coast and East Coast IPAs is a burgeoning business. (West Coast is hoppier, or more bitter.)

“In the 1970s, the United States was laughingstock of the beer world,” Carroll said. “Here we are in mid-teens, and we now have international breweries copying us — people from around the world want to learn about American craft beer.”

Carroll has been involved in the craft beer movement for more than a decade. A writer and editor, he’s written about beer for the Los Angeles Times, as well as industry publications like Celebrator Beer News and Beer Paper L.A., and was one of the original organizers of L.A. Beer Week.

“I don’t brew because I was never good at chemistry and I can’t cook,” Carroll said. "But it turned out that I have a good palate and an interest in history,” 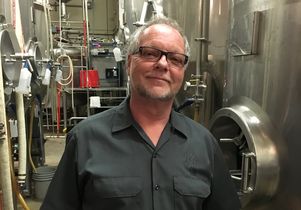 For the past 12 years or so, he’s been a member of a Culver City homebrew club called Pacific Gravity — a pun on “specific gravity,” which is the measurement of the density of the wort (unfermented beer) to the water when brewing. Based on his own experience offering one-day classes and seminars on beer and beer history, Carroll was appointed to an advisory board for the business, management and legal programs department at Extension.

“After attending a presentation about the SDSU craft beer program, I wanted to explore the possibility of launching a craft beer program at UCLA Extension,” said Ing Phansavath, a program director at Extension. After a meeting of the advisory board, Carroll volunteered to develop a syllabus for this introductory class and to teach it. “We decided to test the waters with this first class, with plans to expand into a fuller program next year,” Phansavath said.

“Not only are students learning about beer styles and tasting beer, they are also gaining business knowledge that includes learning about marketing, distribution, inventory, legal regulations, and much more,” she added.

Gustafson, citing her own background in urban planning, has been particularly interested to learn “the various ways cities have made themselves welcoming — or not — to new breweries.”

“I drank a lot of really bad beer in my early 20s,” he recalled. “Around 26-27, I started trying slightly nicer beer. Then I tried a keg of El Segundo Brewing Company’s Blue House Citra Pale Ale at a friend’s baby shower, and I was blown away. I was never going back.”

He heard about the course when a friend texted him about it. “I’m most impressed with the depth we’re getting into,” Knapp said. He’s also enjoyed the quality and experience of the guest speakers. “I’m getting a very good understanding of the process, different types of beer. It’s not only really educational, but it’s fun to sample beers in class.”

Carroll said the class is an idea whose time has come, even if Los Angeles isn't one of the nation’s acknowledged brewing centers — yet.

“L.A. was really late to the game, one of the last big cities to finally get on board, but we’ve been catching up fast,” Carroll said. Aside from Craftsman Brewing in Pasadena, which dates back to 1995, the movement really started going locally in about 2009, with breweries such as Eagle Rock Brewery in Glassell Park, Strand Brewing in Torrance, and Ladyface Ale Companie in Agoura Hills, he said. L.A.’s brewing community continues to blossom.

“The irony is, by the 1920s, before Prohibition, Los Angeles was the fifth-largest brewing city in the U.S.,” Carroll said. “It’s fascinating that it’s finally coming back.”