During his first quarter as dean of the School of the Arts and Architecture, Brett Steele sat down with David Roussève, who served as the school’s interim dean from 2015–2017, to discuss a variety of subjects, including the role the school plays in the social landscape, the relationship between the arts and dialogue, the importance of collaboration and the value public institutions bring to society.

As dean, Steele oversees the school’s leading programs in art; architecture and urban design; design media arts; and world arts and cultures and dance; as well as the school’s two acclaimed museums — the Fowler and Hammer museums — and the Center for the Art of Performance at UCLA, its groundbreaking performing arts program. Steele’s appointment, which commenced Aug. 15, 2017, was announced in December 2016.

An American architect and naturalized British citizen, Steele served as the academic leader and chief executive of London’s Architectural Association School of Architecture for more than a decade. He is also an honorary fellow of the Royal Institute of British Architects, a fellow of the Royal Society for the Arts, has authored more than 200 publications and edited six books.

In addition, Steele is the founder and series editor of Architecture Words, which has published the writings of many of the world’s leading architects, designers and scholars, including faculty members of the UCLA School of the Arts and Architecture.

A portion of Steele and Rousseve’s conversation is below. A longer version is available on the School of the Arts and Architecture website as is a video of Steele discussing the role of cities, artists and education in the 21st century.

Roussève: I’m wondering about the transition you have made from a private institution to a public one and what might be exciting or not so thrilling about that transition?

Steele: I’m excited by it very much, in part because I think a public institution is becoming increasingly endangered in a world in which private interests are given greater and greater — if not reward — recognition in defining the world. At a personal level, I feel like I owe a great deal to having grown up alongside a public campus, a public university, in the small college town where I was raised, which explains how it’s possible I could have traveled half a world away.

This was in Oregon?

Yes. Eugene by way of Idaho. I simply can’t imagine ever having left without that exposure. A publicly funded university is an incredibly difficult, complex institution to manage and operate today at the level of success that a place like UCLA has been fortunate to enjoy. Promoting that model, explaining that model, fighting for the value inherent in the public educational setting is an incredibly important thing to do. It’s a valuable asset to society. 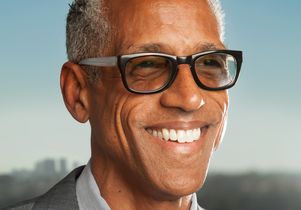 What is the artist’s role in society?

More than anything, an artist’s capacity for vision is something that we take for granted within creative fields. Artists have the ability to envision a world as something other than simply what we see sitting here in a room. That’s what artists do. I think that’s what they do best. They can envision things that, in our busy everyday lives, we sometimes miss or overlook in our experiences. Having faith that envisioning the future matters is a struggle today, but I do believe that it is key to our fields.

I wonder — maybe even with that in mind, or with so much of this dialogue in mind — 10 years from now or even five years from now, what would you consider a success in your time here … what would be fulfilling to have accomplished or pushed forward?

That’s a great question, David. That we’ve found some way to articulate beyond how we are doing it now? The ways in which a school like this can situate itself productively in a larger audience or community of interested, creative, intelligent, committed individuals. I think that’s one of the hardest challenges for schools today. Not just for us as individuals. We ask the same questions of ourselves as artists, but how can a school at the scale of an institution that, at any moment might be made up of more than a thousand different people, different voices, articulate and express itself. It’s a difficult project, right? It’s much easier at the individual level for us to do this, but how does a school do this? If we’ve made some progress on that over the course of the next decade, we’d be happy.