The 2016 presidential race was primed to be a “squeaker,” even before Hillary Clinton and Donald Trump became the chosen candidates, said Lynn Vavreck, UCLA political science and communication studies professor, based on objective data and dispassionate interpretive keys that have nothing to do with the candidates.

The state of the economy typically is the deciding factor for voters in a presidential election. Predictions based on how the economy has performed in the six months leading up to an election are accurate 75 percent of the time,  she said, citing research that dates back to the post-New Deal era of the 1940s. 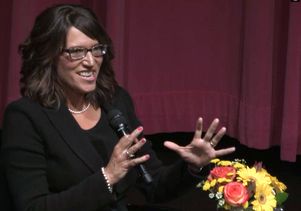 But this year, neither party can latch on to the economy to boost their chances. The economy is improving, but not at a rate Clinton’s campaign can effectively maximize. And the economy is not stagnant enough for Trump’s campaign to hold up as a significant failure of the Democrats. So both campaigns are looking for other narratives to sway voters, Vavreck said.

The UCLA political scientist talked about these narratives and predictions Tuesday night before a packed crowd at the Hammer Museum, which is hosting a series of talks and film screenings related to the current campaign cycle. Joining her on stage was American University political historian Allan Lichtman, who has correctly predicted every presidential election since 1981, based on a model consisting of 13 specific benchmarks that assess the strength and effectiveness of the party in power.

Every U.S. presidential election is actually a referendum on the incumbent party, and the outcome hinges upon a short report card, Lichtman said, not the day-to-day ups and downs of a campaign, debates or polls. After examining every U.S. presidential election from 1860 to 1980, Lichtman built his predictive model in collaboration with the late UCLA seismologist and earthquake predictor Vladimir Keilis-Borok.

According to Lichtman’s model, the incumbent party, led this year by Hillary Clinton, already has five strikes against it. If that flips to six, she will lose, he said.

The key factor is in the “contest” within the incumbent party. This year that hinges upon whether or not Bernie Sanders supporters will rally at the polls for Clinton, he noted. Lichtman refrained from giving his opinion, but asked the audience to chime in instead. And many seemed to agree that a strong anti-Trump sentiment would nudge Sanders supporters toward Clinton.

“This is the toughest election I have ever had to call,” Lichtman said. 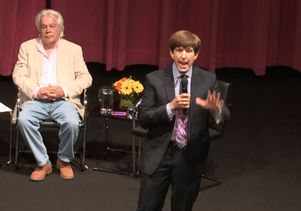 Ian Masters, moderator of the discussion at the Hammer Museum, and political historian Allan Lichtman

The enthusiastic crowd in the Billy Wilder Theater greeted the experts’ efforts to explain and extrapolate around what is an unpredictable campaign with curiosity and a palpable sense of dread at the possibility of a Trump presidency.

Trump’s willingness to employ insider-versus-outsider messaging around race is gaining him voters among non–college-educated white men who fear the loss of jobs to non-whites and who believe there should be more laws centered around protecting the rights of white people, Vavreck said.

“Donald Trump didn’t create these attitudes — these attitudes have been out there a long time … those voters started shifting to Mitt Romney and John McCain too,” Vavreck said. In fact, high levels of racial anxiety can be traced back through the history of polling, she pointed out.

“He has just chosen to prime them in a way that divides the electorate, and he successfully did that in the Republican primary and is largely successfully doing it now in the general,” she explained.

McCain and Romney deliberately chose not to engage in that kind of messaging, she noted. Trump, positioning himself as a political outsider, seems to gleefully eschew the rational politeness of seasoned politicians in every facet of his messaging, both experts agreed.

Lichtman pointed out that past presidential nominees who were also political outsiders, like Wendell Wilke and Dwight Eisenhower, did not run campaigns driven by powerfully hateful rhetoric.

Trump has stirred up a dangerous sensibility, he said, especially with recent comments about how Americans who hold their Second Amendment rights most dear might prevent Hillary Clinton from appointing Supreme Court justices.

“What has Trump stirred up in this country? The worst and most dangerous element — the neo-Nazis, the white supremacists, the Ku Klux Klan,” Lichtman said. “David Duke has said ‘Trump has made this my time.’ All of those groups are encouraged by the Trump campaign," the historian said. “It does not strain credulity to assume how some of those people might interpret what Trump said.

“It is so dangerous and so despicable that, in my view, it ought to be disqualifying for the presidency,” Lichtman added. “We have not seen anything remotely like this in our history.”