For centuries, the Zinacantec Maya women of Chiapas, Mexico, have woven and embroidered clothing that expresses their values and embodies their roles as mothers and daughters. And in the summers of 1969 and 1970, Patricia Greenfield, now a UCLA distinguished professor of psychology, traveled there to study the women and the art they produce.

“As a researcher on culture and human development, I went to Chiapas mainly to find out how Zinacantec girls learn to weave and how weaving affects the way they think,” she said, adding that she wore Zinacantec clothing so the villagers would feel more comfortable with her. “I never expected to amass a textile collection.”

Greenfield is the curator of a free exhibition at UCLA’s Powell Library, “Weaving Generations Together: Evolving Creativity in the Maya of Chiapas,” which displays colorful hand-woven clothing from the region and provides insights and information about the Mayan people. On display through Dec. 15, it is the largest exhibition ever in Powell Library.

After her initial visits, Greenfield returned in 1991 and several times since, sometimes accompanied by her daughter, Lauren Greenfield, a professional photographer. As Patricia studied the girls’ and women’s designs, she began purchasing the most interesting textiles when they were available. A portion of the collection, which eventually grew to include women’s, men’s and children’s clothing, and weaving artifacts, makes up the Powell exhibition, along with a selection of Lauren’s photographs and videos of girls learning to weave from Patricia’s research.

Patricia Greenfield’s book about the collection, “Weaving Generations Together: Evolving Creativity in the Maya of Chiapas,” was published in 2004 by SAR Press and Press and is the exhibition catalog. In order to give back her research to Mexico and to the Zinacantec Maya community, Greenfield had editions produced in Spanish and Tzotzil, the language of the community.

The catalog contains over 200 photographs of community life, girls learning to weave, and textiles created and worn in the community. “The photographs show a personal connection that, in a closed community, was only possible because I had known families over decades and [Lauren] had been there as a child,” Greenfield said. 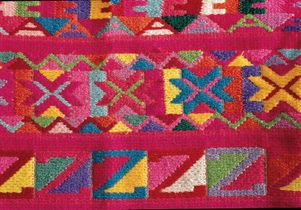 Lauren Greenfield
A Chiapas textile from the early 1990s

In her research, Greenfield has addressed a wide range of issues including how children are socialized, the effects of globalization, how growing entrepreneurship affected weaving and the teaching of weaving, the role of creativity, and verbal and nonverbal communication.

Greenfield said she and her daughter documented a culture in transition, and the village’s rapid pace of social change made it an ideal laboratory for studying how social change alters human development — specifically, learning and creativity.

“My daughter and I observed firsthand and documented gradual yet dramatic social changes,” Greenfield said.

Greenfield learned that the ways in which weaving is taught and transformed from one generation to the next revolves around children’s socialization and development.

“It also highlights the rather underappreciated role of women, particularly mothers, in cultural transmission,” she said. “Weaving is the heart of Maya womanhood. Changes in the weaving and in the way weaving is passed down from generation to generation therefore reflect deep changes in what it means to be a Maya woman.”

Over the years, Greenfield noted a transition from tradition to innovation in the women’s weaving and embroidery. During her first visits, the weavers were still relying on a stock of four textile patterns that had endured over many years. But by 1991, the Zinacantecs had developed several new patterns and techniques, a trend that continues today. Greenfield said the increased focus on innovation has been linked to Chiapas’s growing commercial activity and accelerated social change after 1994, when the North American Free Trade Agreement went into effect.

Traditionally, Zinacantec girls were prepared for weaving from birth, and weaving and embroidery have been statements of identity, Greenfield said. But when she returned to Chiapas in 2012 to study a new generation of young weavers — the third generation she had observed — Greenfield found that fewer girls were weaving than before, which she attributed to a greater emphasis on schooling for girls.

Another evolution, Greenfield said, has been in how the weavers have defined creativity. Decades ago, it meant working within a community framework, producing specific patterns in particular colors that identified the wearer as a Zinacantec man, woman or child. Today, the individual is emphasized, with a greater interest in novel, original patterns in a wide range of colors. As a result, among the newest works in the Powell exhibition are painted designs on woven cloth, embroidery with beads and crocheted designs sewn on woven material.