Proposition 16, which would have repealed California’s law that prevents UCLA and other public universities from considering race in admissions, was defeated Nov. 3 when at more than 57% of Californians voted no on the measure.

The failure came as a surprise to some, considering California’s reputation as a socially progressive state and in the same election year that saw a majority of state voters choose Democrat Joseph Biden for president, and the historic election of Kamala Harris as the first woman, African American woman and South Asian woman to one of our country’s highest offices.

More than merely a surprise, the failure represents a sort of ongoing structural quicksand for young learners of color, said Darnell Hunt, dean of social sciences in the UCLA College.

“The rejection of Prop. 16 means that California’s public universities will continue to have only limited tools for correcting a tilted playing field that has traditionally led to the underrepresentation of Latino and Black students on campus,” Hunt said. “One such tool currently in use — holistic review — considers students’ achievement in the context of how well they make use of the opportunities available to them in their high schools. But this tool is not very efficient at leveling the playing field. It’s kind of like using a spoon to shovel snow.” 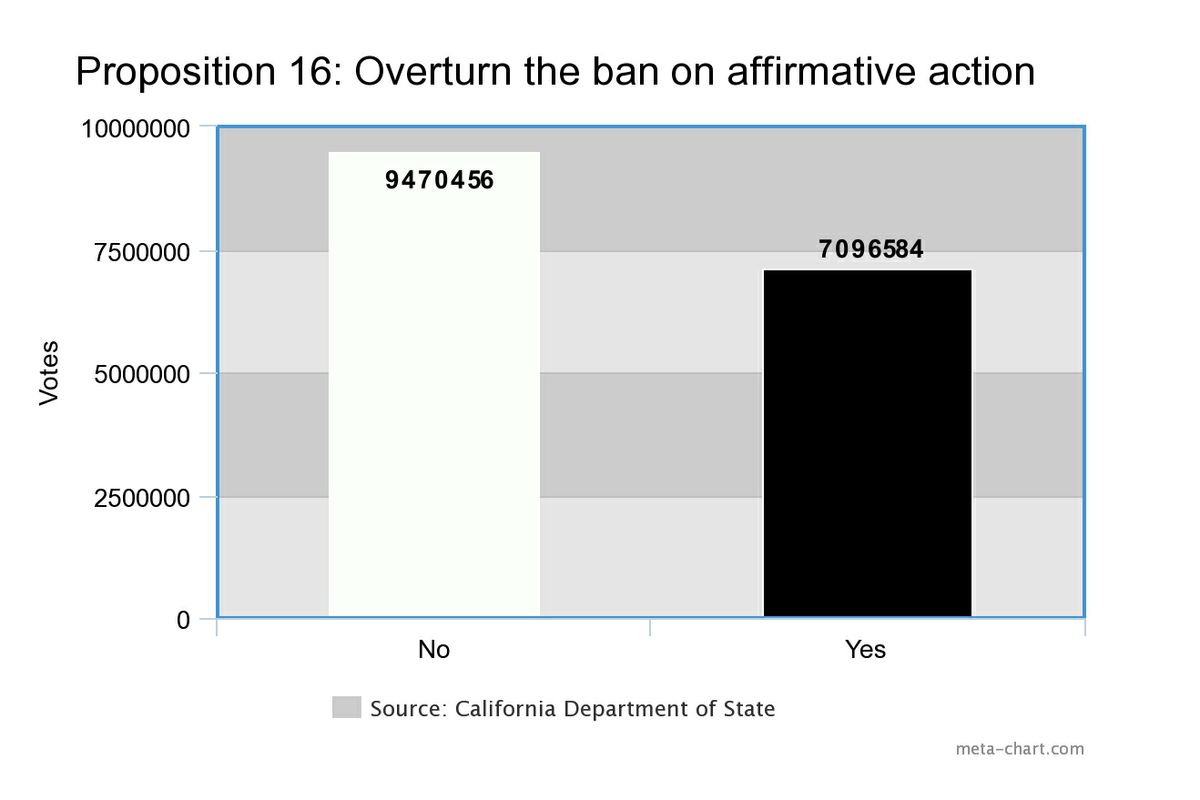 Prop. 209, which effectively repealed affirmative action, has been the law of the land in California since 1996. Though private institutions are not legally prohibited from using race as a determinant in admissions, schools like UCLA must continue to innovate in their outreach to underrepresented communities and find ways to make the admission process as inclusive as possible. The University of California Board of Regents supported Prop. 16.

“When 209 passed it was seen as a specific conservative period of California politics,” said Natalie Masuoka, chair of the Asian American Studies department. “But we see from 2020 that much of our politics has not dramatically shifted.”

Masuoka is currently tracking a county-by-county analysis of how members of different demographic groups voted on the measure. She’s seeing indications that Asian Americans largely joined whites to oppose it. Many of the arguments against the proposition came from Asian American groups, who feared it would hamper progress for students from those backgrounds.

“If this finding is correct, I think the reason for the racial conservatism is something that needs to be explored further,” she said. “I also think that for Asian Americans, it’s not clear how strongly they oppose affirmative action. Voter education could be really essential in this case.”

In addition to voter education, there is an ongoing need for greater clarity in the language describing propositions, said Chon Noriega, director of UCLA’s Chicano Studies Research Center. Noriega noted that a report from the Latino Community Foundation — conducted by Latino Decisions — showed that only 39% of Latinos surveyed in California understood that the proposition would reinstate affirmative action.

“The rest were split between thinking it would prohibit affirmative action or did not know what it meant,” he said. “I do not think that Prop. 16 offers insight into the political leanings of the state, or even into the actual level of support for affirmative action. Frankly, a significant reason for its failure resides in the fact that the ballot text was poorly written, leading some to think that the proposition would prohibit considerations of race and ethnicity.”

When it comes to the recruitment and retaining students of Indigenous or Native backgrounds, the situation is very complicated and nuanced, said Randall Akee, chair of UCLA’s American Indian Studies interdepartmental program.

Some Native students fit not only within a racial or ethnic identity, but a political one, as members of sovereign nations within the United States. But this is not true for all potential students, some of whom may have Native heritage but not tribal membership.

Akee and a committee of community organizers and representatives from public universities in California are working on a list of best practices for recruiting Native American students, one of which includes taking their tribal citizenship into account in the admissions process. Prop. 16 might have helped crystallize that approach, but it is within reach even under the confines of the current law.

“For instance, there is priority hiring in the federal government of American Indians or Alaska Native, which is not race-based, so it doesn’t conflict with laws about race,” Akee said. “It is about the political status of the individuals, akin to preferential hiring for veterans for example, who have a political status outside of their race.”

Some arguments against Prop. 16 implied that:

But Hunt said that approach leaves behind a lot of promising students.

“That stance reflects a lack of understanding,” he said. “Many qualified students are at under-resourced schools. As one example, predominately Black and Latino schools in Los Angeles tend to not have as many Advanced Placement courses as other schools. Meanwhile, the typical UC student, particularly at the more competitive campuses like UCLA and Berkeley, have GPAs well over 4.0.”

The only way a student can achieve this type of GPA is by taking AP courses — for which they get five points on their report card for an A grade instead of four — for every course they take, he said.

“But if you are a Black or Latino student who goes to an under-resourced, inner-city school that offers few AP courses,” Hunt said, “you can be a straight-A student and still have a much lower chance of being admitted to top UC campuses if the focus is just on the numbers.”

The UC system and entire public school infrastructure in the state owes those kids more, he said.

“There are all kinds of examples in the research showing that once you give students a chance, they tend to rise to the occasion,” he said. “I believe we as Californians need to meet the moment and recognize that this is a time of reckoning for the entire country. Our state is a harbinger of the nation’s future with respect to population diversity. We should also lead on the issue of how to make our public institutions more inclusive. In the aftermath of the failure of Proposition 16, we need to have a serious conversation about how to create fairer access for all students.”