Glittering stained glass. Intricately carved botanical capitals. A cedar spire towering over the heart of Paris. These features all make the Sainte-Chapelle, a royal Gothic chapel built nearly 800 years ago, spectacular in its own right and a perennial stopping point for tourists. Consecrated in 1248, this showcase of piety and power within the French sacral monarchy eventually evolved into a symbol of the artistry and beauty of France across Europe. 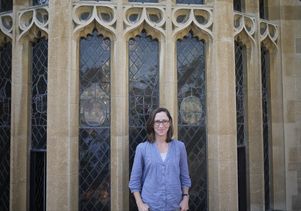 In a new book, “The Sainte-Chapelle and the Construction of Sacral Monarchy: Royal Architecture in Thirteenth Century Paris” (Cambridge University Press, 2015), UCLA art historian Meredith Cohen shows us that the rich history and cultural significance of the 13th century Gothic chapel are equal in importance to its artistic merits.

“This building was a special, ingenious way for King Louis IX to unite his people under his rule and to really convince them that he was the God-given king,” said the assistant professor of art history.

The chapel was built by the king to hold the crown of thorns purportedly worn by Christ on the cross. Today, with its spire still visible over buildings in Paris, the Sainte-Chapelle is a renowned historical site and a paragon of the ideals of Gothic architecture. When a project to restore and protect its 1,113 panels of much-admired stained glass is completed this year, the chapel will be without scaffolding for the first time since the 1970s, according to the Wall Street Journal.

In her book, Cohen looks beyond what previous scholars have explored to reveal the function of the building and the historical significance of its uses. Cohen spoke recently with Newsroom editorial assistant Maggie Sharpe.

What initially drew you to the Sainte-Chapelle?

I was an art history student at UC Santa Barbara, and I had to take an intro class to medieval art like everybody else. There I was in this huge lecture theater, and I saw the most beautiful building I had ever seen — it’s really breathtaking. That image of the Sainte-Chapelle is on the cover of my book. All throughout my undergraduate years, and even as a graduate student, I could not forget that building. It simply captivated me and made me ask questions about its purpose and function, questions that I aimed to answer in this book.

What struck me about the Sainte-Chapelle was that it doesn’t seem nearly as dark or 'heavy' as other Gothic structures — like Notre Dame, for example. Is that accurate?

Yes, it’s different. It’s much smaller in span than most Gothic churches because it’s a chapel, and what makes it so beautiful and light is that it has walls of stained glass. Cathedrals are generally much larger, so they’re not able to have walls of stained glass. But the goal of Gothic architecture really was to open up the walls as much as possible for the colored light of stained glass. The Sainte-Chapelle is, therefore, a high point in the technical achievements of Gothic architecture. It’s a monumental jewelry box, whereas Notre Dame is an imposing stone church.

What would you say are the architectural features and artistic elements that make the chapel so noteworthy?

Well, the stained glass for one, but the architecture is also noteworthy. In medieval Paris the Sainte-Chapelle was one of the tallest buildings and could be seen from anywhere in the city. The exterior decoration was concentrated at the top of the building. There are gables that alternate with pinnacles, and they go all the way around the building, kind of like a crown. The decoration matched the building’s function; it was the repository for the actual relic of the crown of thorns, and the chapel was located in the palace of the kings of France, who held the political crown. I would say the gable and the pinnacle motif became the emblem of the architecture of that time. All of the architecture made in the city had this motif. This artistic turn in Parisian culture is quite striking.

Can you talk a bit about the sacral monarchy and its impact on the 13th century?

Over history, many rulers have used religion to bolster their authority … the Egyptians had the pharaoh who claimed to be divine; even in Rome, the emperor claimed to be divine. The Sainte-Chapelle is a medieval recasting of that same idea where the king is then also claiming divine authority. Through this building in particular, the king asserted divine authority over the church, a significant statement because in the Middle Ages, the church and its leaders were immensely powerful.

You mention in the book that Paris wasn’t necessarily predestined to be the central city in France. How did Paris earn that distinction?

One reason was that Paris became the site of the first university (now the Sorbonne). Paris also became the future political capital of France seemingly by chance: King Philip Augustus was on campaign — kings were itinerant, so they carried all of their archives, their important records and other valuables with them. One day he was ambushed by the British king, who took all of King Philip’s documents. After that, King Philip decided to put his archives in the city of Paris and established an administrative structure. Because the intellectual life and the political life are centered in Paris, the artistic life then begins to grow in Paris at the time. My book examines that part of its cultural development and how that contributes to the construction of French identity.

Did the construction of the chapels and cathedrals, like Sainte-Chapelle and Notre Dame, contribute to this focus on Paris?

Oh, absolutely. That’s one of the claims of the book. The book argues that the Sainte-Chapelle represents a certain high point in Gothic architecture that’s easily reproducible. And yet it’s happening at this political and social moment when Paris is becoming the artistic, political and intellectual center of France, the capital of France. Because it’s so closely tied up with politics, the social life and the city of Paris, the building becomes a symbol of all of that — an emblem of a French cultural, artistic, national identity — even though you couldn’t really speak of “nations” at that time.