Even during a pandemic that has suspended live music and large gatherings everywhere, UCLA’s Spring Sing was never really in danger of being canceled entirely.

Some traditions are too important to the UCLA community.

The annual showcase of talented emerging artists and performers is such a signature tradition that shortly after safer-at-home rules went into place for Los Angeles, the students charged with putting on this year’s show committed to bringing the creative voice of the Bruin community online.

“This brand new platform — while totally unexpected — allowed us all to get even more creative with what we made and how we made it,” said Jess Grimes, executive director of the 2020 Spring Sing committee. Grimes is set to graduate this year with degrees in dance and gender studies. “The committee members who spearheaded this initiative did so with such enthusiasm and in such a short amount of time. It was inspiring seeing the silver linings of this strange moment in time in which we are all staying at home.”

Started in 1945 as an outgrowth of informal competition among fraternities over which had the best group of sorority serenaders, it has evolved in the decades since to become one of the most important dates on the UCLA calendar. Each spring hordes of students line up outside the Central Ticket Office the morning tickets go on sale to get their tickets to the most glamorous of the events that help culminate the completion of another school year.

This year’s show features filmed and edited video performances from 15 acts selected before the campus shifted to remote learning. Each act came up with a concept video, filmed remotely, and the Spring Sing Film Crew subcommittee provided editing services.

Campus comedy troupe, Company, worked out a series of video interstitials, allowing that hosting tradition to continue. Public access to the website will be available starting the morning of the show so viewers can read more about each act, view a related art show, read bios of artists and organizers, and check out behind-the-scenes content.

And instead of celebrity judges, this year the Bruin artists on the bill worked virtually with celebrity mentors, which brought an exciting new aspect to the proceedings, Grimes said.

“It was such an incredible experience for the students to get personalized feedback and career advice from people in the industry,” Grimes said. “The mentors we’re so kind, and it was evident how much they truly cared about the acts. I know for many students, they felt it was a highlight of their year.”

Typically held in Pauley Pavilion, which has a capacity of about 8,000 ticket holders for Spring Sing, shifting this year’s event online allows for Bruins from around the world to be part of the event.

“It's been immensely rewarding to see the work start to pay off, knowing that it will hopefully bring so much joy to others as well,” Grimes said.

The show is being offered for free, which is very special for far-flung audiences, she said. Alumni Affairs is accepting donations online however, as Spring Sing and hundreds of other traditions and events are funded through the alumni association.

Beckman said she is blown away by the student organizers.

“The committee all figured out how to best adapt their roles to fit this new medium and created some incredible additions which wouldn’t have been possible in a live format,” she said. “The talent of our student body is undeniable but I am most proud of their resilience.”

Moving the event online and not being able to work together in person required flexing some different creative writing muscles this year, said senior Jake Garberg, who is part of Company. But it brought out some interesting ideas for sketches that should help create a shared moment for the audience. 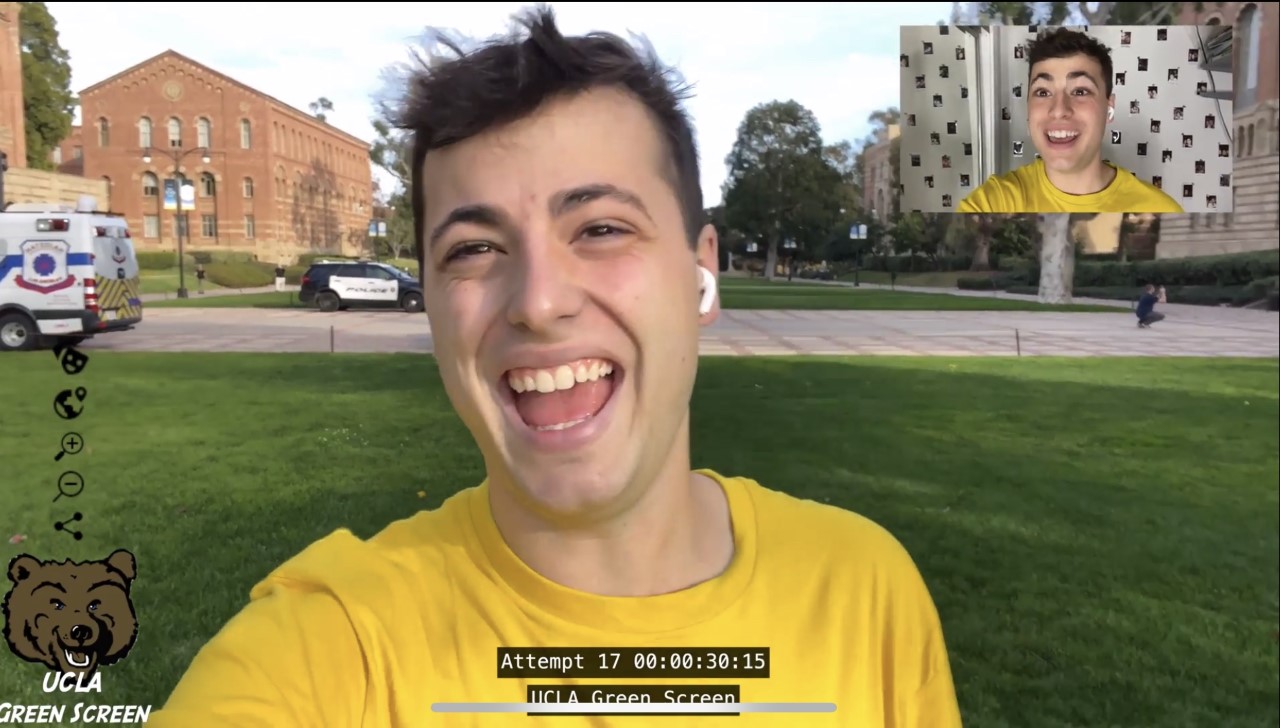 “One thing we first focused on was the idea of trying to create a sense of normalcy, but we realized pretty soon it would be very difficult to re-create scenes of normalcy, so we started writing sketches that took advantage of our limitations, focusing more on what we are all going through right now,” said Garberg, who is on course to graduate with a degree in English in June.

The team typically writes together as a group, he said, so doing that from afar was a challenge, but some funny things emerged, like the fact that several group members, independently of one another, found solace playing old online Club Penguin video games from childhood.

“We’re out to distract people a little bit,” Garberg said. “It’s been really fun to see what people came up with, it says a lot about what they’ve been doing during quarantine. We know we can’t totally forget what’s going on, but we’ll be poking fun at some silly things — expect some sketches about family dynamics.”

The Spring Sing committee also worked on a making-of documentary that will run online and serve as a record of these strange times and how they grappled with staying true to their core values of community building, supporting art and artists, and helping students find their artistic voices.

Grimes worked on Spring Sing 2019 as a talent director, an experience she said was extremely meaningful and shaped her ideas about her post-graduation trajectory as an artist.

“It was definitely difficult to let go of the vision I had for Spring Sing 2020, but this has ultimately been the most rewarding experience of my life,” she said. “We all had big hopes and dreams that we clung to as we moved on from what it could no longer be, but with time, effort, and a lot of collaboration so many of those big dreams are actually becoming a reality.”