For Darrell Brown, who grew up in the sometimes turbulent neighborhood of South Los Angeles, receiving his certification in bank management from UCLA Extension was a game changer. Now a senior vice president at U.S. Bank, he’s a member of UCLA Extension’s Board of Advisors, a group that Extension Dean Wayne Smutz has mobilized to bring lifelong learning to nontraditional students and underserved communities.

UCLA Extension will celebrate its 100th birthday this year. But Smutz isn’t looking back. He wants to reimagine learning in Los Angeles with pop-up classes, a strengthened online presence, closer community ties and partnerships with such businesses as Hispanic ad agency Sensis, among other strategies.

The goal is to give adult learners in all corners of the Southland a chance to climb up the economic ladder through education.

“They can’t come to us, so we have to do a better job of getting to them,” Smutz said. “The widening of the economic gap has made this more critical than ever. Disproportionately, minorities and the poor are not pursuing college, [are] dropping out and losing out.

“In a city where minorities are increasingly the majority and the inequality chasm is growing dramatically, this is not the concern of just those directly affected,” Smutz continued. “If we don’t help this population, there’s a real downside for everyone on the back end.”

Extension has been holding classes in downtown Los Angeles since 2008. Now it's extending its reach to Woodland Hills, where a new multi-classroom location will open in April — part of Smutz’s plan to launch in multiple locations across Los Angeles over the next several years. On Thursday, Feb. 23, UCLA Extension gave the public a preview of its new Woodland Hills Warner Center campus.

Pop-up courses will also give Extension new scope and flexibility. “This is directly aimed at underserved populations,” said Smutz. “There’s just no way we can afford permanent leased space all over the city, and this allows periodic forays into areas that really need us.” 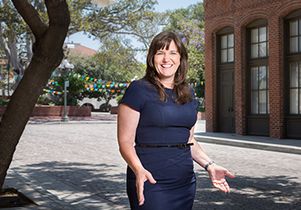 Jeanne Holm, a UCLA alumna and another Extension advisory board member, has been teaching a pop-up course called “Transforming Your Community.” L.A. City Council member Curren Price opened up his office as a location — an unconventional but convenient “classroom” in South Los Angeles.

Holm’s requirements for the course are simple: an innovative idea and the passion to see it through. Her students — from teenagers to senior citizens — organize into teams around projects to redesign a park, help renters use solar power, introduce urban agriculture or green spaces. They use everything from Legos to Post-its and cell phone photos to give shape to these goals.

One student, a homeless teenager, initially balked at the idea of being enrolled in a UCLA course. “I don’t think this is for me,” he told Holm. But both the instructor and the student persevered. When he found a place to live, the first item he hung on the wall was his certificate of completion of his Extension course.

Holm, a veteran NASA manager who is now the senior technology adviser to Mayor Eric Garcetti, is committed to touching the lives of more students. “Learning happens everywhere,” she said. “If we are truly a public university, we should be everywhere our people are.”

The pop-up concept is Smutz’s brainchild. Growing and expanding the idea requires outside funding, so he is actively seeking corporate, foundation and other philanthropic partners. Extension is a self-supporting nonprofit and receives no state or university funds.

“Extension hasn’t raised funds like this before,” said Smutz. “But now we’re taking on projects clearly oriented toward helping underserved areas, so it makes sense. Our general intention is to start small and see if we can build attention.”

To build support for its outreach efforts, Smutz is reaching out to UCLA Extension alumni to provide necessary assistance and partnership. Brown, the successful banker with strong roots in the community, is one of them.

“Dean Wayne reached out to 100, 150 Extension alums and friends across the entire gamut of organizations, from industry to nonprofit,” said Brown, now chair of Extension’s Committee on Access, Inclusion and Excellence.

“If you take education to where you connect in the community, you build relationships and collaborations and unity,” Brown continued. “You can create a crusade around education for those who may not have the opportunities that others have had. You end up uncovering genius that would otherwise go undiscovered.”

Brown is especially excited about the pop-up classrooms. “Can you imagine the conversation between a young guy who is into tech but can’t afford four-year college tuition, and a woman who worked for 35 years in a corporation but was forced into early retirement when the company was downsized? His tech knowledge coming together with her work experience … Extension is just a very unique place.”

In the Hispanic community, Smutz has reached out to Jose Villa, president of L.A. advertising agency Sensis, who also has become an Extension adviser.

“One area we’ll be targeting is Hispanic business owners, especially Latinas with startup firms,” says Villa of a fast-growing economic segment in the service sector. “These women can greatly benefit from what UCLA Extension has to offer in advancing their entrepreneurship.”

“One of the huge benefits of Extension is that the price point is very reasonable,” Villa continued. “An M.B.A. program is not an option for a lot of these women, but in many respects, Extension can give them the same education.”

In addition to expanding its presence online to reach more students nationally and internationally, Extension has launched a partnership with the DaVinci Schools, which offer a college preparatory program for graduating high school students that is a classroom/online hybrid.

Smutz is also planning to approach technology companies to increase accessibility among underserved populations who may not have internet access.

Extension offers all courses both online and face-to-face. But even in-person courses are web-enhanced, with the syllabus and course materials available via Canvas, a learning management system.

“Our educational systems were created for the 20th-century industrial society. We need to create new approaches for this century,” said Smutz, noting that UCLA Extension is fortunate to have Hollywood, large gaming companies and Silicon Beach so close at hand. “We are engaging these industries in creating and nurturing 21st-century learning that attracts and inspires students.

“For an organization like ours to be competitive and agile, we need to be able to move quickly on many fronts to make sure education can help level the playing field in our economy,” Smutz added. “We need to help more people get the education they need to help themselves.”

This story has been updated from one in UCLA Magazine.