"Welcome to UCLA!” Those words were yelled out and spelled out repeatedly today all across the Hill, home to a robust undergraduate residential community, as thousands of students and their families returned to campus on the first day of move-in weekend.

By noon, roughly 3,000 residents had already moved in, said Peter Angelis, assistant vice chancellor of housing and hospitality services. By the end of the day, that number was estimated to double. Come Saturday afternoon, the final day of move-in, nearly all of the estimated 12,000 undergraduate students who reside on the Hill will be unpacked and ready to start the 2014-15 academic year. Classes begin on Oct. 2

Among the students who were unloading family vehicles and filling the ubiquitous blue and gold laundry carts was Colette Troughton, a first-year biology student. This was a new experience for her, and not just because she was moving to college.

“I’m excited, but I’ve never moved before,” said Troughton, who has lived in the same house in San Clemente her entire life. 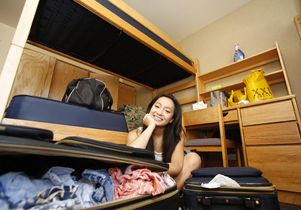 Evyn Mirasol takes time out of her busy day to enjoy her new surroundings.

Making the transition easier, said her mother, was the smoothness of the process, facilitated by eager student volunteers who helped push carts and give directions.

“So far, it’s been excellent,” said Collette’s mother, Casey, who was pushing one cart brimming with items while her husband, Mark, pushed another. “I’m shocked actually,” she said. “I was expecting chaos. These guys have been helpful,” motioning to volunteer Vanessa Foust, a freshman student from Palos Verdes, who was making sure the Troughtons found their way to DeNeve Plaza.

Despite balmy temperatures in the 80s, Foust and other students who helped new residents move in were full of energy and in great spirits. “It’s not that bad because the breeze kicked in,” said Foust, who was four hours into her shift. “They’re giving us free popsicles over there so I’m happy. I only have about a half an hour left.”

Farther up the Hill, Evyn Mirasol and Omar Khan, both students and housing government representatives, were already settled into the newly renovated Hitch Suites. Mirasol, a University High School graduate traveled just 20 minutes to get from her home to the campus while Khan had to fly for 20 hours from Karachi, Pakistan.

They were both making friends and enjoying their new surroundings and amenities as a result of a renovation at Hitch. “I’m most excited about the kitchen,” said Mirasol. “If we want to cook for events, we can.”

That was welcome feedback for housing officials. “There was a lot of time spent thinking about whether we should redevelop these buildings or renovate,” said Angelis. “We made the decision to renovate because they’re different from our high-rise buildings. These are suites, they’re still highly in demand and we didn’t want to reduce that type of residence inventory.”

Nearby, Saxon Suites is currently undergoing a similar reboot. It’s scheduled to open in fall 2015. This is the first time these complexes have undergone extensive work in the 30-plus years since they were built.

Equally important was the effort to preserve the suites’ pastoral setting. The two complexes sit on a wooded northwest corner of the Hill. “We value the park-like setting of that area of the Hill and didn’t want to lose any of that in redevelopment. We wanted to keep the woodsy setting as a key part of the Hill community.”

Both complexes, which will collectively house about 750 students when Saxon is completed, are being given new exteriors, new quality-glazed windows, new bathroom fixtures and finishes, and new carpeting and wall coverings. Seismic and structural upgrades have also been addressed, along with the installation of new fire alarm and sprinkler systems. Each building is also getting a new commons building that will be roughly twice the size of the original ones.

The commons buildings will offer additional study and social space for residents, laundry facilities and some office space, among other amenities.

A special feature of the Hitch commons building is an upper-level, multipurpose room and communal kitchen space that students can book for special events or casual gatherings. “It’s a fabulous space with views into the woods,” said Eric Heggen, senior project manager in Capital Programs.

Residents will also be able to enjoy other shared amenities that are new to the Hill.

Saxon will be getting a new outdoor barbecue area on the east side of the complex, complete with seating. Four basketball courts have been relocated to Hitch to make way for the new parking lot 13. Outfitted with new landscaping and paving, the previous Lot 13 will then become the main entrance to the Saxon suites from DeNeve Drive, Heggen explained.

The new basketball facilities at Hitch include two regulation basketball courts, featuring a “Mondo Court” surface, and two smaller asphalt-surfaced courts. There’s access to restrooms, vending machines and a water fountain for those using the courts.

Planners have been especially eager to provide more space for group and individual study and more high-quality, multi-use spaces for community building. Putting in community cooking facilities, both indoor and outdoor, was also a driving consideration in the planning, said Angelis.

Time and time again, students have indicated in focus groups and discussions that they would like to see these amenities as part of their on-campus housing experience, said Suzanne Seplow, executive director of the Office of Residential and Student Life.

A community kitchen, more study space and places to just relax or hang out with friends are important to students, she said. “We’ve been intentional about building these things in.”

Seplow is particularly enthusiastic about the new common and social areas in Hitch, a residence that mainly houses freshmen. “It’s going to be a great opportunity for first-years to build community,” she said. “We’re excited for them to come and meet one another and congregate, and we believe it’s going to have a huge impact.”

It looks like that’s already happening — on day one of move-in weekend.