Food security is an issue of major concern along with climate change, as water supplies become scarce and the world’s population continues to grow.Combined, these factors are expected to stress the world’s agricultural capacity. But one solution may be right underfoot, so to speak.

Insects are easy to digest and grow. They may even provide global food security in the future. But while human beings have been eating them for thousands of years — and two billion people still include bugs in their daily diet — there’s a “yuck” factor to contend with for many.

UCLA lecturer Andy Rice explored the delights of entomophagy — bug eating — with recent L.A. Laker Metta World Peace and students in Rice’s “Food: A Lens on Environment and Sustainability” class last quarter. Many first-time bug eaters were dubious about partaking in fresh, roasted crickets, with reactions varying from the purely squeamish “like salty regret in my mouth” to “it’s like eating shrimp.” For his part, World Peace described his first roasted cricket as “not bad, tastes like an end piece of bacon, crispy … and a little bit scary.” 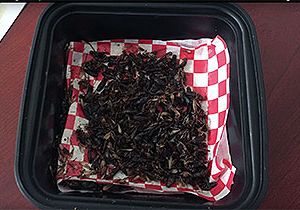 A dish of roasted crickets ready to sample

Rice, who is also a documentary filmmaker and media studies scholar, said he admired the students' willingness to give critter cuisine a try. "For some, it took a good deal of bravery to do so," he said in an email. Students’ techniques varied from quickly throwing crickets into their mouths to savoring the moment and gently placing them on their tongues. Their reactions "made me curious to learn more about the history of entomophagy in the Americas, as well as contemporary practices."

As for World Peace, who just happened to run into Rice while the basketball star was on campus visiting another faculty member, Rice said, "He was a great sport about it — even took some crickets home to share with his kids."

Rice also dwelled on the serious side of entomophagy. He believes bugs will be a great source of protein in a world affected by climate change. Many experts say that global warming and human development will reduce agricultural lands. Insects could be a smart alternative to resource-intensive foods such as beef.

They are hardy and thrive in warmer temperatures, which are expected to be stressors for traditional livestock. The infrastructure for insects is also simpler and requires less space, making it easy for families to raise certain species at home.

"Given the possible things we'll have to consider to survive in a hotter, drier future, ... the stakes are quite high in figuring out how taste cultures function and change," Rice said.

This story and video are posted on the website for the UCLA Institute of the Environment and Sustainability.