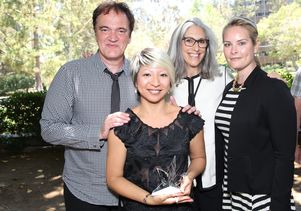 "It's not your job to create your vision; it's your job to have a vision," Tarantino told graduating students at an invitation-only event that was part of the showcase. Tarantino has had such cult hits as "Jackie Brown," "Kill Bill," "Pulp Fiction," "Reservoir Dogs" and "Django Unchanged," which became the highest-grossing film, exceeding $425 million at the worldwide box office.

“Mr. Tarantino is a passionate filmmaker, who uses lighting, set and costume design to give his films their distinct visual style, “said Brian Kite, chair of the theater department. "This same passion can be seen in the student work showcased at DSW each year where the future leaders in design meet with film, television and theater industry professionals to advance their careers.”