Two planes were flown into the World Trade Center towers, one crashed into the Pentagon, and the fourth, United Flight 93, went down in a field in western Pennsylvania after its 40 passengers and crew members fought back against the hijackers, thwarting their plan to fly the plane into the U.S. Capitol.

For UCLA alumnus Paul Murdoch, it will be a particularly poignant anniversary. In 2005, the Los Angeles architect and his team were selected from more than a thousand candidates to create a national memorial at the Flight 93 crash site. Since then, they have worked with the National Park Service, Virginia-based landscape architecture firm Nelson Byrd Woltz and the bereaved families to design and build the memorial and park, which spans a 2,200-acre decommissioned coal mine just outside of Shanksville.

This Friday, Murdoch will speak about the design process at the Flight 93 National Memorial, where visitors will be able to experience the park’s final landmark, the “Tower of Voices,” a sonic gateway to the complex completed in 2020.

The tower is a 93-foot–tall concrete lattice structure from which hang 40 large wind chimes. The aluminum chimes are 8 inches in diameter and range from 5 to 10 feet long. Their haunting, melancholy melodies are meant to commemorate the voices of the passengers and crew members who lost their lives.

“It’s not a set of booming sounds, except in a winter storm,” Murdoch said. “It’s really operating at a more intimate and personal level.”

Finishing the memorial over 15 years

The tower, a C-shaped open structure that allows wind to pass through, is located in an exposed field near the entrance to the park, with the open face of the tower facing the main memorial site.

“We wanted to introduce something near the entrance to really begin the memorial experience, and have something vertical as a gateway beacon,” Murdoch said.

Visitors enter from the state highway, pass the tower and then drive two and a half miles through the park to the visitor center.

The park itself proved to be a challenging site. The National Park Service, along with the families of the Flight 93 passengers and crew, had to purchase all of the land. Because much of it had been used for underground or open-pit coal mining, the soil and water required long-term remediation.

The park initially opened to the public in 2011, on the 10th anniversary of 9/11. The main part of the memorial is situated in a semicircle around a bowl-shaped “field of honor” ringed by 40 groves of trees and a wall of 40 white marble panels, each one engraved with the name of a Flight 93 passenger or crew member. In 2015, the visitor center and a learning center were added, along with an overlook structure that sits about 200 feet above the impact site, which is marked by a giant sandstone boulder.

Designing the Tower of Voices

Building a massive musical instrument presented a complex design challenge. Murdoch worked with an engineer who used computational fluid dynamics to predict the movement of wind through the tower, a sound artist who specialized in chimes and the late composer and musician Sam Pellman, who helped fine-tune the chimes. 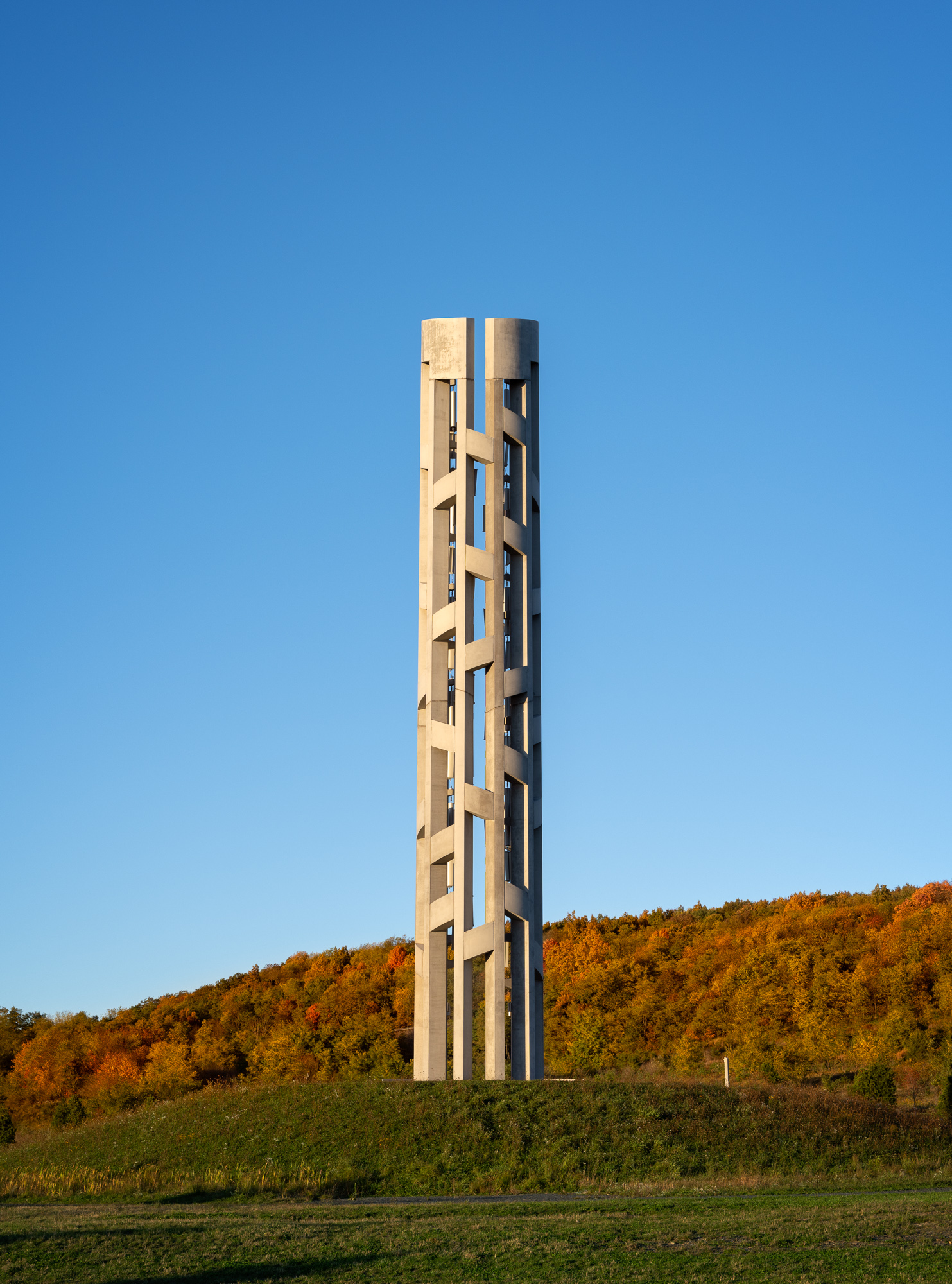 Eric Staudenmaier and Paul Murdoch Architects
The 93-foot tower stands as a beacon at the gateway to the park. “We wanted to introduce something near the entrance to really begin the memorial experience,” Murdoch said.

“[Pellman] and I hit it off right away, and he understood that we were trying to engineer possibilities with the sound because of the randomness of the wind,” Murdoch said. “We both agreed that there’s a certain harmony that we were after in the sounds because of 40 people acting together on the plane in the way that they did, but also a certain dissonance that was required because of the tragedy and the violence.”

Murdoch also recruited a sail designer to create sail mechanisms sturdy enough to withstand heavy wind but light enough to catch the wind and move the strikers within the chimes.

“I was looking for somebody who could bring those two ends of the spectrum together and really find that sweet spot between something very robust and durable, as well as very buoyant and responsive in the way that we needed to generate strikes to create sound,” Murdoch said.

When the tower structure was dedicated in 2018, only eight chimes had been installed. By last year, all 40 were in place, though some final adjustments still need to be made to the chime assemblies to optimize them for strong winter winds.

Other aspects of the park continue to evolve. Volunteers are expected to plant between 150,000 and 200,000 trees at the site, and new hiking trails will be added.

The challenges of getting memorials right

Since receiving the commission for the Flight 93 memorial, Murdoch has submitted designs for a variety of memorial projects around the world, including one commemorating the July 22, 2011, terrorist attacks in Norway and the World War I memorial in Washington, D.C. He said that designing memorials is often difficult because it requires a high level of nuance.

“It could be too abstract, on the one hand, to really have any feeling. And feeling in a memorial is very important. To be able to sustain that over time is very difficult,” Murdoch said. “I think it needs to connect in a personal way, in an emotional way. But if it’s simply an expressionistic or an emotional piece, I think it can also lose its longevity in a historic sense.”

Murdoch expects there to be a throng of visitors to the memorial this week. A 9/11 memorial service will feature a reading of names and a ringing of bells for each of the 40 passengers and crew members.

“We’ve put a lot of ourselves into this project, so it’s gratifying to see that it is being well visited. It’s not an easy place to get to. It’s off the beaten path. But I think it’s a very important place for Americans, especially, to visit. Not just to really pay that respect but also to just have a personal touchstone to themselves,” Murdoch said.

“It may be a cliché, but our democracy is fragile and it requires ongoing work to keep it vital. And this is a place where 40 people did that. And I think it’s a place for visitors to ask themselves what they can do to keep that as well. So I see our contribution as having helped create a place for that to happen.” 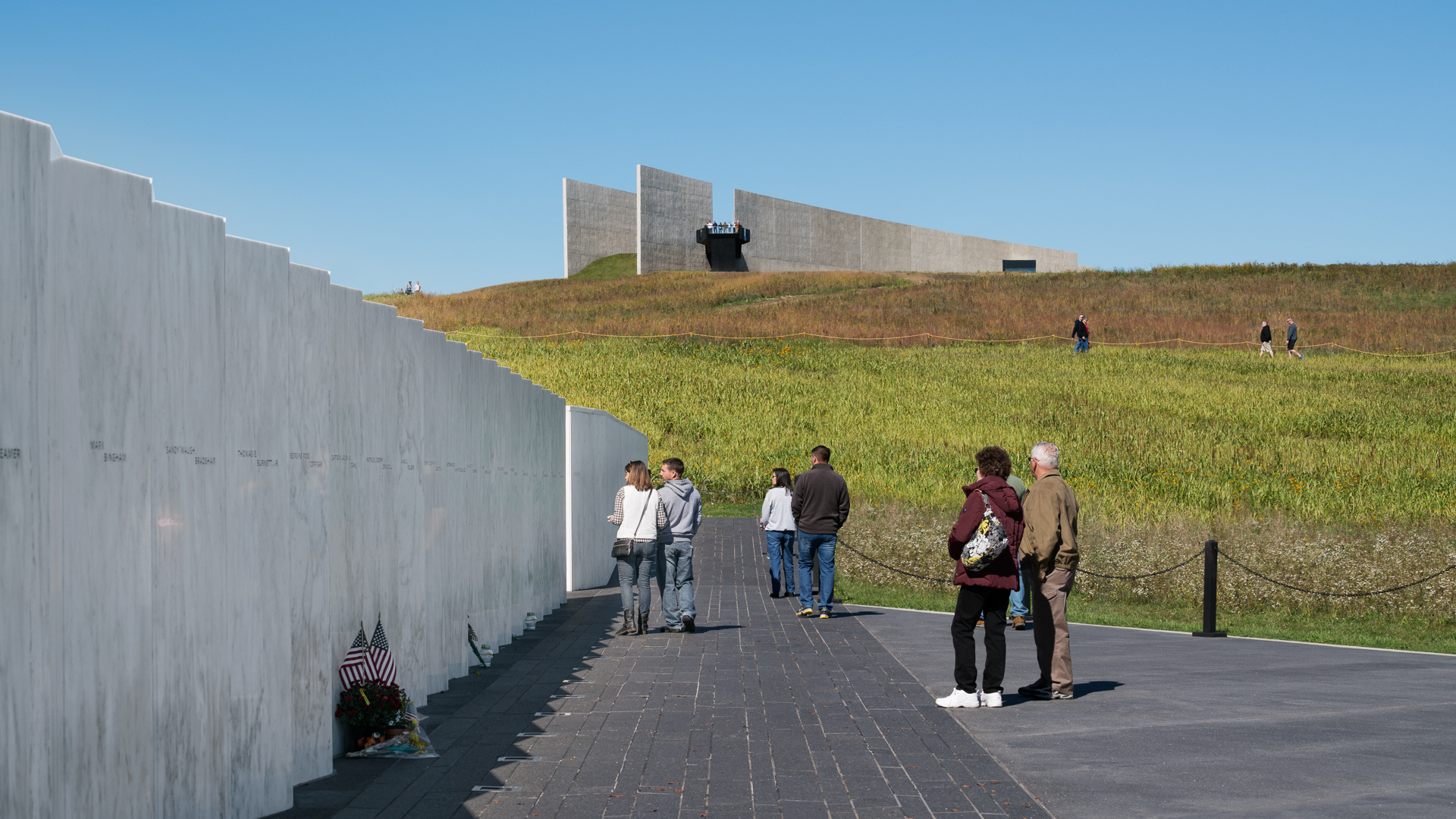 Eric Staudenmaier and Paul Murdoch Architects
Visitors to the Flight 93 memorial in Pennsylvania walk past the 40 marble panels listing the names of passengers and crew members who perished. In the background is the observation deck that looks out over the site where the plane crashed.

The path to UCLA and beyond

Murdoch’s firm has also designed a handful of UCLA campus projects, including a student lounge and a research greenhouse. It’s where his architecture career took off.

After graduating from the University of Virginia, Murdoch traveled the world for a year before landing in Los Angeles and being dazzled by the experimental architecture and urban design of the city. He spent two years at a Philadelphia firm before returning to the West Coast and enrolling in the architecture program at UCLA. He worked with then-department chair Charles Moore and the ​​UCLA-based Urban Innovations Group to design the Beverly Hills Civic Center, a playfully postmodernist complex.

Murdoch found that UCLA “had this combination of very free-spirited, creative exploration, and also hands-on opportunities to do real projects. And I’ve always valued both of those, theory and practice.”

After completing his master’s degree in architecture at UCLA in 1984, Murdoch worked for architect Arthur Erickson before founding his own firm in 1991 with the expressed mission of “the poetic exploration of sustainable architecture.” He now runs it with his wife and partner, the architect Milena Murdoch, whom he met as a graduate student at UCLA.

One of their most recent projects is the renovation of Willowbrook’s Earvin “Magic” Johnson Recreation Area, the largest public open park space in South Los Angeles. It features natural wetlands that double as a stormwater reclamation and treatment system, fishing ponds, walking trails, picnic areas, a playground and a splash pad.

Murdoch’s team designed the site’s community events center. The long, narrow building sits along the edge of the lake and can host large events like weddings or conferences, but it also has classrooms, offices and meeting rooms for after-school programs.

“Because Willowbrook is unincorporated, it doesn’t really have a city hall or a civic center. So there’s a civic aspect to this building, as well as it acting as a park building,” Murdoch said.

His firm has long sought to create projects that contain flexible divisions between indoor and outdoor spaces and a harmonious relationship between buildings and their surrounding landscapes. In a post-pandemic world, well-ventilated spaces and open plan interiors will be especially valuable.

“I think those things had already had momentum, and they’re just going to be that much more emphasized now and going forward,” Murdoch said.

The Flight 93 National Memorial’s 20th anniversary observance of 9/11 will take place from 6:45 to 8:15 PDT and will be livestreamed on the memorial’s Facebook page.