As a child growing up in Los Angeles, Brianda Perez had little opportunity to take a visual arts class at her school, where they were scarce and hard to get into.

With an interest in visual arts and no way to pay for private lessons, Perez was largely self-taught until she enrolled in UCLA’s School of the Arts and Architecture.

To help ensure that young people have access to art classes and that art-making is kindled at an early age, Perez, a UCLA alumna, and Brittany Ko, a fellow alumna in the arts, work with youngsters attending after-school art classes run by UCLA’s Visual and Performing Arts Education (VAPAE) program. They travel weekly to the Huffington Center at St. Sophia’s Cathedral, located in the Byzantine-Latino Quarter in L.A., to work with 16 middle-school students who come from three neighborhood schools. 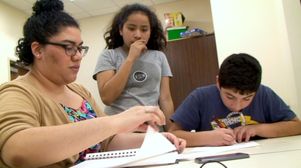 “They have so much talent at such a young age,” said Perez of her students. “Having come [to UCLA] without even having taken a formal art class, I hate to think of how much potential talent we’re losing because young students don’t have opportunities like this,” especially when art classes have been the victim of budget-cutting at many schools.

“Our UCLA students are attending college — many are the first in their families to do so — deepening their knowledge about their chosen disciplines and then sharing what they’ve learned in the community,” she said. “It’s a mutually beneficial pipeline of sharing one’s artistic knowledge and passion through responsible teaching and community service. It’s the right thing to do and everyone benefits.”

The VAPAE after-school program was launched in 2013 by the School of the Arts and Architecture. It’s an extension of the teacher training and outreach work that VAPAE had already been doing in local schools.

VAPAE also offers a seven-course minor in arts education to students who are enrolled in the School of the Arts and Architecture. An average of 25 students enroll in the minor each year and learn about community engagement and teaching methods, including how to create an eight-week, arts-based lesson plan. They then spend the following quarter implementing those lessons for 10 hours a week at the UCLA Community School, the UCLA Lab School or a K-12 LAUSD partner school.

Since VAPAE’s inception in 2010, its students have worked with roughly 4,400 K-12 students, including those in 125 classrooms at 15 LAUSD school sites.

Perez graduated from UCLA in 2014 as a design media arts major with an arts education minor. Like many other VAPAE alumni, she was hired to work as an arts educator in the program.

“I know as a middle-schooler, I was unsure of my talents, but seeing their confidence and abilities grow and develop is inspiring to me as a teaching artist,” said Perez, who grew up not far from St. Sophia’s. “Many of these students don’t have art programs in their schools, and if they do, they have one class, and it has to follow a certain structure. Here, they can come and let their creativity drive their work.”

Ko, a fine arts major who completed the VAPAE teaching sequence before graduating from UCLA in 2013, said the after-school class offers students a safe place to express themselves through art. “They are allowed the freedom to use their imagination and present their ideas in a space where there really are no wrong answers," she said.

Daniela Salamanca, an eighth grader at Jane B. Eisner Middle School, is one of the young artists at St. Sophia’s. She said she has not only grown as an artist over the past several months, but she has gained a new perspective.

“I get to meet people who are different from the ones in my school, and so I get to know more about other environments and how others live and the experiences they go through,” she said.

Fellow middle-schooler Ally Vasquez, a seventh grade student at St. Thomas the Apostle School, appreciates the chance to be creative. “It’s very relaxing, compared to going to school where you have math, history, science and all of that,” she said. “Coming here … you can let your imagination run free and do what you want. They set very few limits, and it’s nice.”

But make no mistake. These are not your run-of-the-mill art classes. “These are studio sessions,” said Drucker, who helped launch the program. “This is a space where young artists are free to be creative and explore their interests without worrying about what their friends at school think. You’d be surprised at how these kids open up when they aren’t worried about being judged. By leaving their home campuses, they try on the artist persona more freely.”

On Feb. 11, students in the after-school classes showed off their screenwriting and film-directing personas to family and friends attending a presentation of the short films they wrote and produced with Perez and Ko's guidance. In the next 20-week session, they will learn about sculpting and ceramics. At the same time, a new session focusing on music will start for third- to fifth-graders. Beginning this fall, the VAPAE after-school program will expand again to include parents and grandparents, who will be creating art alongside their children and grandchildren.

“We are continuing to grow, based on the great interest and need in the community,” said Drucker. Weekly after-school studio sessions also began at Waldo Emerson Middle School in Westwood last fall.

In the near future, Perez plans to apply for graduate school to study graphic design or earn a teaching credential. She wants to use her VAPAE teaching experience and education to continue to foster artistic expression among people from all walks of life.

“I’ve always had a dream of opening up a free workshop for high school or college students who have an interest in fabricating their own art,” Perez said.