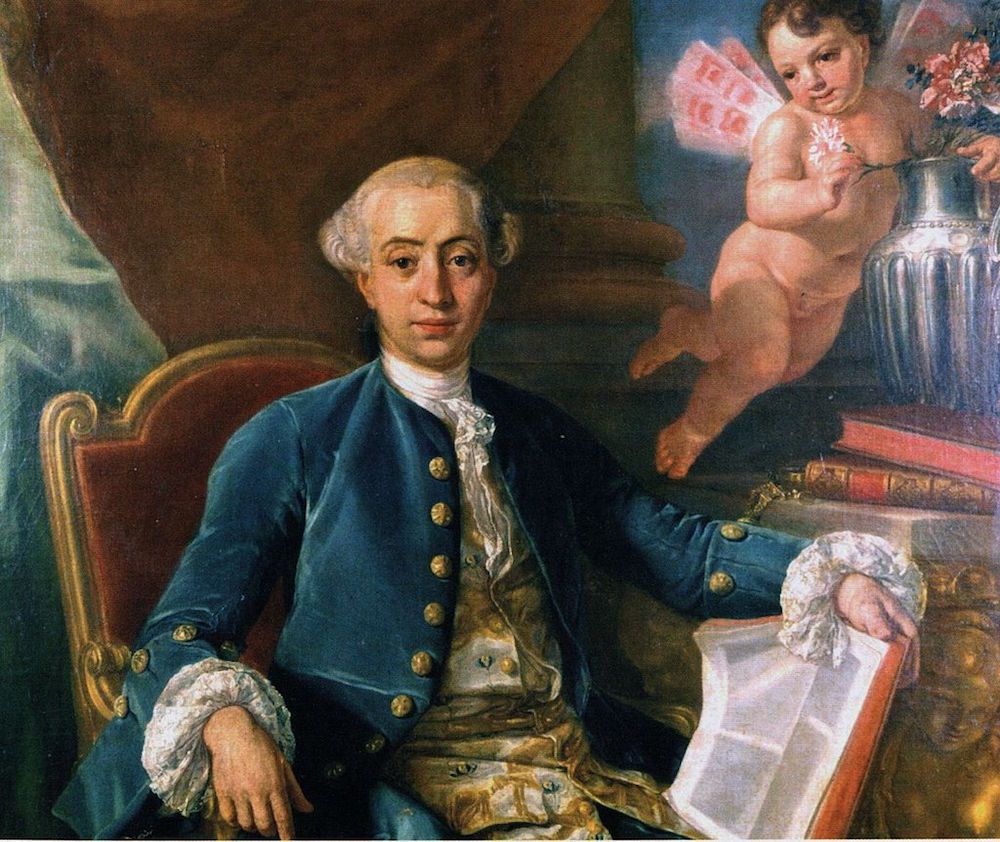 ​Malina Stefanovska is a professor of French and Francophone Studies at UCLA. She has published on the French court and on memoirs and autobiographies in the 17th and 18th centuries. She has recently completed her own personal memoirs of a childhood in Macedonia and is presently preparing a book on Casanova. This column was published Feb. 11 on Zócalo Public Square.

He first saw Henriette when she was travelling with an army officer and disguised as a man, though everyone could tell that she was a beautiful woman. His love grew stronger when he saw her in a dress, and when he learned that she was a spirited, cultivated, and intelligent lady. He bought her clothes and jewelry. He cried with pride when she surprised him by masterfully playing the cello in front of connoisseurs. They spent three heavenly months together; “never,” he wrote, did even “a folded rose petal come between us to trouble our happiness.” When she left him in Geneva, mysteriously summoned by her family, he looked tearfully at her coach through the hotel window — and saw that she had engraved on the pane, with the point of a diamond ring he had given her, these words: “You will forget Henriette.”

But he did not. Almost 50 years later, around 1795, he wrote the story of their love — as fresh and intense as when it happened. Throughout the 19th century, romantic pilgrims retraced his steps from Parma to Geneva, hoping to find Henriette’s engraved message.

“He” was the notorious Giacomo Casanova, and he recounted his youthful affair with Henriette in his monumental autobiography, penned in a remote chateau in Bohemia where he spent his last years as the librarian of a German noble. After a youth in Venice, and a life in Paris, London, Constantinople, Saint-Petersburg, and other cities that took him from riches to misery, from jail to conversations with royalty, and from one beautiful woman to another, this unique adventurer relived his experience through writing it. The resulting legend has never ceased to inspire romantics and playboys, writers, poets, and filmmakers.

Valentine’s Day 2016 is an auspicious moment to reconsider what we know about it. In 2010, the manuscript of Casanova’s “History of My Life” was acquired by the French National Library and became accessible to the public as part of Francophone cultural and historical heritage. Two new scholarly editions are presently appearing in France. A wider readership for the “Life” will rightly discover Casanova’s talent as the creator of his own myth: His fame owes as much to his skill as a writer as it does to his amorous abilities.

His tactics could be amusing. During his stay in London, feeling lonely in a city where he hardly knew anyone and didn’t speak the language, he placed an ad in his window looking to sublet an inexpensive apartment in his house to a young lady — provided she spoke Italian, received no male visitors, and kept him company at the dinner table. The ad made London society chuckle and soon brought him Mistress Pauline, a young, beautiful Portuguese noblewoman who, like Henriette, had escaped her family and was awaiting a signal to return home. Casanova fell in love immediately and courted her till she willingly made love to him. He made sure, he asserts, that she enjoyed it as much as he did. Indeed, he believed that both sexes could and should equally delight in erotic pleasure — and even wrote a proto-feminist treatise on women’s physiology and education — which made him unusual for his time.

Thus, while Henriette might have been the most romantic of his loves, Casanova had many more — duchesses, theater actresses, nuns, farm girls and courtesans. But he gave himself earnestly to each. He courted, lavished presents, amused, and helped. He respected female intelligence and wanted talk and company as well as sex. Finally, carried on by what he calls “the demon” of his adventurous destiny, he left for the next one. Unless, as in the case of Henriette, she was the one to leave. Either way, he would remember her — and write about her, lovingly, long after. We know from published letters, as well as from his account, that several of his former lovers also remembered him warmly; he corresponded with several (including Henriette) after they parted.

Casanova’s story is one of a life lived large, with an omnivorous creative appetite. He enjoyed other things as much as lovemaking — preparing a delicate meal for a wayward nun, lavishly masking his carnival companions, gambling through the night even if he lost a fortune. Also exchanging impromptu verses with other poets, creating elaborate hoaxes to convince others of his powers as an alchemist, and shining in a noble salon through his wit. His autobiography gives us a unique representation of 18th century Europe as reflected in one consciousness — from its pleasures (gambling dens and casinos, the Venetian carnival, German spas, the Paris opera, London theaters), to its clothes and food, its means of transportation (gondolas, sleds, boats, and all varieties of carriages), and its exotic places (Corfu, Constantinople, Madrid, Rome). Casanova provides pointed comments on various customs or languages; he describes well-known inns and hotels of his times along with the small objects on which fortunes were spent (snuff boxes, watches, silk stockings and jackets, female bonnets). He sketches the constant financial struggles of adventurers like him along with central beliefs, ideas, and conflicts of the Enlightenment.

Thus, though Casanova is mostly known as an inveterate lover, the diversity of his passions and talents is mind-boggling. He was a financial whiz who helped Louis XV fill up the royal coffers through lottery, a con man who extracted a fortune from a rich marquise adept at alchemy, a mathematician who attempted the long sought (but impossible) “calculation of doubling cubes,” an accomplished poet who translated the “Iliad” into Italian verse, a skilled writer who in one night penned an entire comedy without the sound “r” for an attractive actress with a speech impediment. He was the only prisoner who ever escaped from the notorious Venetian prison “The Leads.” Of course, he made the account of his flight into a narrative so enthralling that it opened to him the most exclusive Parisian salons.

Yet Casanova’s autobiography shows us as well that his character was far from unblemished: He gambled, cheated, and endured financial straits, humiliation, and prison — not to mention the recurring maladies, like syphilis, brought on by his libertine lifestyle. He also systematically refused marriage — the “tomb of love.” His book is honest about his not-so-admirable traits. And if his memory embellished his amorous feats (which, unlike most of the other facts, could not be checked), Casanova also knew to stop his autobiography in good time: It ends before his decline into old age and poverty, preserving for eternity his youthful legend and remaining an enthralling reading for all lovers. He shows how a talent for romance can be part of a much grander passion for life and writing.