When Westerners think of Tibet, images of Tibetan Buddhism and a mystical, timeless Shangri-la often come to mind. To Deborah Cohen, a researcher of contemporary art in Tibet, this is an antiquated, inaccurate view of the region, located high on a plateau northeast of the Himalayan Mountains.

Cohen considers the Tibetan artists’collective she has studied for the past 10 years far more representative of the country’s reality. After varied academic pursuits and a career woven around artistic expression, Cohen will celebrate her doctorate degree in culture and performance June 11 at the UCLA’s hooding ceremony at 3 p.m. in Royce Hall.

“Getting a doctorate … has been cathartic in the sense that I realize that I have done an awful lot of work and have come to value what I’ve done.”

Cohen intends to leverage her newly minted degree to secure grants for future artistic projects, including opportunities to curate art exhibitions. She also looks forward to publishing articles on her subject in academic journals.

Cohen’s dissertation took her to extreme heights — 13,000 feet in altitude to be precise — as she explored the thematic depths of the work produced by the Gedun Choephel Artists’ Guild, a group formed in 2003 in response to the Chinese government’s decision to build a railway between Beijing and Lhasa, Tibet’s administrative capital. 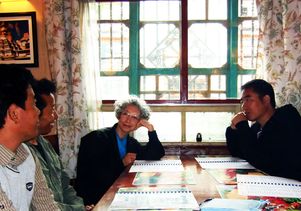 UCLA doctoral student Deborah Cohen sits at a cafe with friends and an artist from the Gedun Choephel Artists’ Guild after giving a lecture at Tibet University about the artists’collective.

Nyandak was one of two guild members that Cohen was instrumental in bringing to Los Angeles in 2010 to serve as artists-in-residence for two months at the 18th Street Art Center in Santa Monica.

“They became a guild to address their culture not as a historical artifact, but as a living, breathing culture,” said Cohen. When she started her graduate studies, very little was known about contemporary Tibetan artists who were working within Tibet.

China and Tibet have been in conflict over Tibet’s sovereignty rights since 1950. Ever since China claimed power over Tibet, human rights issues and the mass migration of ethnic Chinese into Tibet have followed. This, coupled with China’s promotion of Tibet as a tourist destination, has sharply eroded Tibet’s culture and traditional way of life, said Cohen. The Chinese government’s decision to build an extensive rail line between Beijing and Lhasa catalyzed the collaboration of these contemporary artists, who were all trained in China.

“Everything was changing in the Tibetan culture. The effects of the Cultural Revolution had been devastating for Tibet,” said Cohen, who made three trips to Tibet to conduct research.

Artistic expression and culture have been an important part of Cohen’s life since childhood. A classically trained ballet dancer, Cohen graduated from Hamilton High School in 1960 with dreams of attending Juilliard. Although not accepted, she spent the 1960s dancing in film and television, including “West Side Story,” “American Graffiti” and the popular rock and roll variety show “Shindig.”

Back in Los Angeles, she decided to explore a new side of herself and find a way to bring together her various interests — drawing, building, space, movement and design. She had never attended college, and she realized she needed to experience higher education.

Ultimately, she enrolled at the Southern California Institute of Architecture. "The entire process from the moment I started school to now has been an extremely wonderful chance for me to experience in-depth critical thinking, an opportunity my parents never had," said Cohen.

After graduating in 1997, she began working as an educator at the Museum of Contemporary Art, where she still works. She was also hired as an architectural designer for a renovation at Estilo Salon in West Hollywood.

In her mid- to late-50s, she became increasingly interested in exploring the intersection between dance and architecture. At the time, said Cohen, UCLA’s Department of World Arts and Culture/Dance was just getting off the ground; it was the perfect place for her to pursue a master’s degree in culture and performance, she thought.

Her master’s thesis examined how modernism in the West had taken inspiration from the East in the form of mandalas, a spiritual and religious symbol in Hindu and Buddhist teachings which came to represent expressions of abstract space in modernist painting and sculpture.

This work took her to Tibet where she immersed herself in the art and culture of the region. She said that she traveled alone and stayed with a local woman (which she later learned was forbidden for foreigners) and got by well for someone who didn’t speak the local language.

“I would walk down the street and get thumbs-up from the local people because I was an elderly white woman just walking around alone in this big city in the center of Tibet.” It was during this visit that she met the group of contemporary artists who inspired her to continue graduate work and produce a Ph.D. dissertation.

“Once I met the guild members, I realized I really needed to write about them because they needed to be recognized,” said Cohen, 73, who is the oldest person to earn a Ph.D. this year at UCLA.

“The most impressive thing about Deborah is that she doesn’t give up,” said Donald Cosentino, professor emeritus in UCLA’s Department of World Arts and Cultures/Dance, who chaired Cohen’s dissertation committee. “There weren’t people around who could always help her. She’s really a model of self-motivation and diversity, because not only did she write about these artists, she also championed them in the U.S.”

He described the art produced by guild members as complex and well done. “They’re a group of mostly men who, like Deborah, have had to fight to get where they’re at because they don’t have anyone who is going to give them a step-up in this.”

He said he had never had a student pursue a Ph.D. at Cohen’s age in the 35 years he has taught at UCLA.

“The very fact that she’s thrown herself into something so contemporary and so contentious — being very much a senior — is again pretty damn impressive,” Cosentino said. “She’s a tough lady. She won’t give up.”