For Taylor Ludeke, a UCLA Ph.D. student in mechanical engineering, doing research is wonderful — but the prospect of having to explain her work fills her with dread.

“I can talk to strangers like nobody’s business, but I can’t make any sense when I’m trying to explain my research,” said Ludeke, who studies the mechanics of animal locomotion. “It’s like I’m two different people.”

To confront her fears and improve her speaking skills, Ludeke signed up to compete in UCLA’s second annual Grad Slam. The contest, which enters its semifinal and final rounds this week, first teaches participants strategies for speaking to diverse audiences about complex topics. Next, they compete before a panel of judges by speaking for three minutes about their research in terms anyone can understand.

“It sounds like horrible torture, which is part of how I knew it would be good for me,” Ludeke joked.

Many Ph.D. candidates struggle to describe their years of research in just a few minutes, and all the more so because they must also shift gears from the specialized language of their academic field to jargon-free English, explained Sonya Gavin, lead organizer of the competition and director of operations and external relations for the Graduate Division, which hosts the Grad Slam. 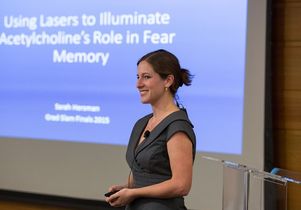 UCLA
Sarah Hersman, third-place winner of the 2015 UCLA Grad Slam, said the contest helped her explain her research to family and friends.

Grad Slam is part of an ongoing effort at UCLA and other UCs to give grad students the skills to make their research come alive for anyone, from friends and family to conference audiences, potential employers, research funders or the media, said Robin Garrell, vice provost of graduate education and dean of the Graduate Division.

Of the 69 students who competed, 24 have been selected for Tuesday’s semifinals, where they will speak before a new panel of judges to earn one of eight spots at the finals, to be held at UCLA’s James West Alumni Center on March 3. The public is welcome to attend both contests. The winner of the UCLA Grad Slam will take home $3,000 and represent the campus at a UC-wide competition in April, where the grand prize is $6,000.

In some ways, the competition is secondary to the main goal of helping students communicate more clearly about the vital research they do at UCLA, organizers said. Workshops held before the competitions taught two sets of skills — storytelling and being “bilingual” in both academic lingo and plain English, depending on their audience.

Attending a workshop in January were a few Grad Slam competitors and other interested students who came to get advice on how to better communicate the importance of their research. Several students balked when the speaker, Celia Hoffman, a communications consultant brought in by the Graduate Division, told them to cut down on academic jargon and rely more on metaphors.

“Abstractions are obstructions,” Hoffman advised. “They are hurdles, and the more hurdles you throw at your audience, the more likely they are to give up.”

“But jargon has precise meanings that are important,” one student interjected.

“I knew I was going to get a lot of pushback on avoiding technical language,” Hoffman responded. “I’m not asking you to dumb your work down. I’m asking you to let people in. You have to give up a tiny bit if you want people to understand.”

“How do I identify jargon?” asked a student studying African-American literature. “Since I’m so deep into it, how do I know what words other people don’t know?”

Hoffman encouraged students to practice their presentations with family and friends outside their field to get a sense for which words are commonly understood and which are too specialized.

Unlike Ludeke, who attended despite her trepidation, Young, now a semifinalist, signed up because the event sounded fun.

She also hopes to raise awareness about Duchenne muscular dystrophy, a degenerative muscle disease afflicting her cousin, who inspired Young’s search for a cure through gene-editing research. In her presentation, Young mentioned her personal motivation for beginning the research and explained that Duchenne symptoms are caused by a genetic inability to produce a necessary protein that she compared to an anchor.

When Young finished with 25 seconds to spare, the faculty coach encouraged her to explain her “anchor” metaphor in more detail. “I was a little lost about which part of the muscle is representing the boat or the anchor,” Galvin said. “So that could be two extra sentences."

Young nodded and jotted down notes. “I have no problem giving science talks, but I need help giving non-scientific talks and simple elevator pitches,” the grad student said after the coaching workshop. “It helped today to hear from people outside my field about what made sense. I spend a lot of my time with other biology students who already know what I’m talking about.”

While organizers stressed the benefits of this kind of training for students’ careers, Sarah Hersman, the third-place and audience-choice winner from UCLA’s Grad Slam last year, added that the competition had benefits beyond helping her career.

“It helped me connect with the people I care about,” Hersman said. “Your friends and family don’t want to know the names of the techniques you’re using. They want to know why you care about it and why it’s important to you.”

A list of all semifinalists is available on the Grad Slam website under “Competition Results.” Watch them compete Tuesday from 9 a.m.-noon and from 1:30 p.m.-4:30 p.m. in UCLA’s Young Research Library, room 11360. The campus community and public are also invited to attend the finals at the James West Alumni Center on Thursday at 5 p.m. RSVP here. The finals will also be livestreamed online.